Some Sayings from the Quran and Sunnah about the Heart (Qalb) 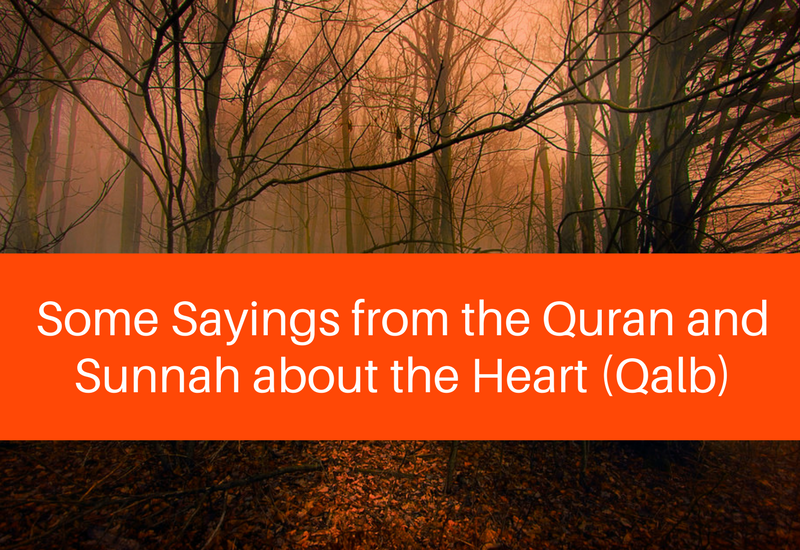 The Heart as a Thinking Organ

The heart is not just an emotional organ. In the Quran, it is described as having the capacity to think.

The Heart is the seat of intention. It is what determines whether we accept or reject the truth.

“And if you are on a journey and cannot find a scribe, then a security deposit [should be] taken. And if one of you entrusts another, then let him who is entrusted discharge his trust [faithfully] and let him fear Allah, his Lord. And do not conceal testimony, for whoever conceals it – his heart is indeed sinful, and Allah is Knowing of what you do.” (2:283)

The Heart as a Vessel of Belief and Disbelief

“You will not find a people who believe in Allah and the Last Day having affection for those who oppose Allah and His Messenger, even if they were their fathers or their sons or their brothers or their kindred. Those – He has decreed within their hearts faith and supported them with spirit from Him. And We will admit them to gardens beneath which rivers flow, wherein they abide eternally. Allah is pleased with them, and they are pleased with Him – those are the party of Allah . Unquestionably, the party of Allah – they are the successful.” (58:22)

That’s why we say the dua:

“”Our Lord, let not our hearts deviate after You have guided us and grant us from Yourself mercy. Indeed, You are the Bestower.” (3:8)

The process of the heart’s falling into disbelief starts with a disease.

You may also like – Does the Quran Condone about Wife-Beating

How do hearts become diseased?

Though hearts can think, they can often get clouded, so that their thinking process gets warped, making the heart diseased. In such a situation, truth and falsehood get distorted, until you can no more distinguish one from the other.

What causes this clouding of the heart?

The heart is clouded with sins, by disobeying its Creator, with everything evil that we allow to enter into it.

The Messenger of Allah said: “Verily, when the slave (of Allah) commits a sin, a black spot appears on his heart. When he refrains from it, seeks forgiveness and repents, his heart is polished clean. But if he returns, it increases until it covers his entire heart. And that is the ‘Ran’ which Allah mentioned: ‘Nay, but on their hearts is the Ran which they used to earn.’” (Tirmidhi 3334)

If a diseased heart remains untreated long enough, Allah (swt) seals it, so that it can no longer perceive the truth.

It is the most important organ of our body

Why is it the most important? Because it’s the only one that will matter on the Day of Judgment.

The sound heart is the only route to Paradise.

“The Day when there will not benefit [anyone] wealth or children, but only one who comes to Allah with a sound heart.” (26:88-89)

The Heart is the organ connecting us to Allah

The Prophet (sa) taught us a beautiful dua:

Women Honored in the Holy Quran Part 3: Aisha (RA)
Why You Need To Perform This Deed
Hadith #2: Hadith of Jibreel A.S [Part IV]