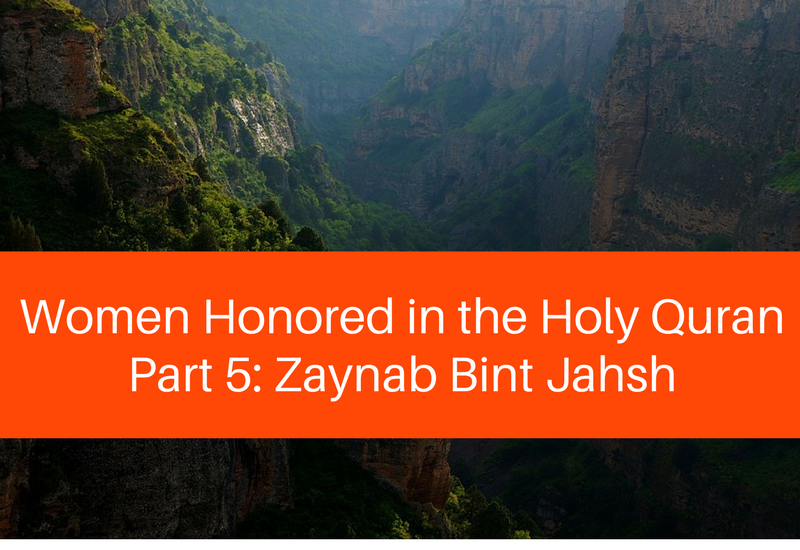 Her Marriage to Zayd ibn Haritha and then to the Holy Prophet (PBUH):

Zaynab bint Jahsh was a cousin of the Prophet Muhammad (pbuh). The Prophet asked her to marry Zayd ibn Haritha (r), his adopted son and freed slave. Zaynab initially refused, saying, “I am of better lineage than him.” Allah (swt) responded to her refusal with:

So Zaynab obeyed and married Zayd. But their marriage did not last due to incompatibility. Allah revealed to the Prophet that their marriage would end and that the Prophet would marry Zaynab himself. Even though the Prophet knew this, he encouraged Zayd to be patient during his marriage. The Prophet was afraid of what people would say if he married the ex-wife of his adopted son. Eventually the couple divorced.

Then the Prophet himself married Zaynab. His marriage nullified the pre-Islamic belief in which an adopted son was the same as a biological son:

And [remember, O Muhammad], when you said to the one on whom Allah bestowed favor and you bestowed favor, “Keep your wife and fear Allah ,” while you concealed within yourself that which Allah is to disclose. And you feared the people, while Allah has more right that you fear Him. So when Zayd had no longer any need for her, We married her to you in order that there not be upon the believers any discomfort concerning the wives of their adopted sons when they no longer have need of them. And ever is the command of Allah accomplished. (Holy Quran 33:37)

After Zaynab’s iddah (waiting period) ended, The Prophet sent Zayd to inform Zaynab of his wish to marry her. Zayd went to her and narrates:

“When I saw her I felt such respect for her that I could not even look at her and tell her what the Messenger of Allah had said, so I turned my back to her and stepped aside, and said, `O Zaynab! Rejoice, for the Messenger of Allah has sent me to propose marriage to you on his behalf.’ She said, `I will not do anything until I pray to my Lord, may He be glorified.’ So she went to the place where she usually prayed. Then Qur’an was revealed and the Messenger of Allah came and entered without permission” (Source ).

Allah gave Zaynab to the Prophet in marriage without any wali (guardian) or witnesses. Zaynab would later boast to the other wives of the Prophet:

“Allah married me to him from above the Heavens” (Bukhari).

Quranic Verse 33:53 was revealed in the context of their wedding feast:

“O you who believe! Do not enter the houses of the Prophet except when you are permitted for a meal, without awaiting its readiness. But when you are invited, then enter; and when you have eaten, disperse without seeking to remain for conversation. Indeed, that [behavior] was troubling the Prophet, and he is shy of [dismissing] you. But Allah is not shy of the truth. And when you ask [his wives] for something, ask them from behind a partition. That is purer for your hearts and their hearts. And it is not right for you to harm the Messenger of Allah or to marry his wives after him, ever. Indeed, that would be in the sight of Allah an enormity” (33.53).

5 Lessons about the Roles of Muslim Women

Obeying Allah and His Messenger Leads to Honor and Happiness:

Zaynab chose to obey Allah and the Prophet by marrying Zayd. Eventually she was honored with marriage to the dearest man to her heart.

Zaynab obeyed the Messenger’s request to marry Zayd, but she never pretended to be someone she was not. Sometimes in marriage, people are not happy, but they can still be at peace with their situation until Allah opens a new door.

The Quranic verse about speaking to the Prophet’s wives from behind a partition was revealed in the context of Zaynab’s wedding. “...That is purer for your hearts and their hearts” (33:53). We must guard the purity of our hearts.

Zaynab loved to help the poor:

Some of the wives of the Prophet (ﷺ) asked him, “Who amongst us will be the first to follow you (i.e. die after you)?” He said, “Whoever has the longest hand.” So they started measuring their hands with a stick and Sauda’s hand turned out to be the longest. (When Zaynab bint Jahsh died first of all in the caliphate of `Umar), we came to know that the long hand was a symbol of practicing charity, so she was the first to follow the Prophet (ﷺ) and she used to love to practice charity (Bukhari).

Truthfulness in the Face of Temptation:

During the great slander of Aisha (ra), the Holy Prophet asked Zaynab about her opinion of Aisha. Zaynab could have been tempted to speak poorly of Aisha in order to receive the same attention that the Prophet showed to Aisha. Instead, Zaynab chose to speak well of Aisha and said, ‘By Allah, I know nothing except good (about `Aisha).’ Aisha later said,

“From amongst the wives of the Prophet (ﷺ) Zaynab was my peer (in beauty and in the love she received from the Prophet) but Allah saved her from that evil because of her piety” (Bukhari).