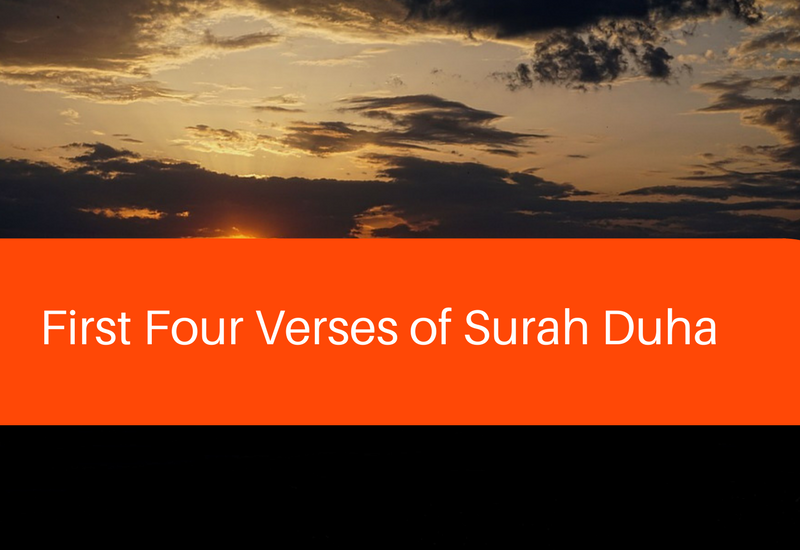 This surah was revealed to console the Prophet (sa) in the midst of the huge responsibility he was facing in conveying the message of Allah, and moreover, he was having to face constant opposition from his own family members and tribe.

“Once the Prophet (ﷺ) fell ill and did not offer the night prayer (Tahajjud prayer) for a night or two. A woman (the wife of Abu Lahab) came to him and said, ‘O Muhammad ! I do not see but that your Satan has left you.’ Then Allah revealed (Surat-Ad-Duha): ‘By the fore-noon, and by the night when it darkens (or is still); Your Lord has not forsaken you, nor hated you.’ (93)” (Bukhari 4983)

Dr Islahi says, “It is evident from Surah Duha that it was revealed in that part of the Makkan period in which the Prophet (sws) was facing intense opposition; so intense was it that he became dejected at not seeing room for any progress of his mission.” (Islahi 1)

The significance of Allah’s taking oaths by these two times of day is to highlight the differing roles of the types of situations we encounter in our lives.

Dr Islahi explains this by making analogy between the phenomenon of the changing of night and day and that of the changing of human being’s state from sorrow to happiness and back again. “Initially, signs in the world around man are cited to show that just as for the material development of this world, the heat and light of the day are needed and so are the coldness and darkness of the night similarly, for the development of hidden potentials in a person, it is essential to make him pass through both ease and difficulty and sorrow and happiness.” (Islahi 1)

Just like iron needs to be heated up and beaten ruthlessly in order to purify it, so is the human being in need of difficult tests in order to become stronger. And the closer a person is to Allah, the greater is his test.

Dr Islahi further says, “The implication is that just as in this world the heat and light of the sun are essential and so are the darkness and stillness of the night, in a similar manner, the trials of happiness and sorrow, ease and difficulty, affluence and poverty are essential for the spiritual and moral development of man.” (Islahi 3)

Dr Islahi says, “People who understand the importance of such trials for their training and instruction and also benefit from them, develop their latent qualities through them and those who do not know how to come to grips with such circumstances or because of their feeble and frail nature do not take advantage of these circumstances which have been destined for them deprive themselves of this high place which no one can achieve unless he passes this test.” (Islahi 1)

After swearing by the day and the night, Allah (swt) assures the Prophet (sa) that “your Lord has neither abandoned you nor is he displeased with you.” (93:3)

“… the Prophet (sws) is addressed and given assurance that the trial he is passing through is not because the Almighty has no concern for him or because He is angry with him. It is part of the greater trial which is essential for the moral development of a person.”  (Islahi 1)

Allah (swt) has mentioned the different functions of the night and the day in our lives in various verses of the Quran, such as:

“Indeed, in the creation of the heavens and the earth and the alternation of the night and the day are signs for those of understanding.” (3:190)

“It is He who made for you the night to rest therein and the day, giving sight. Indeed in that are signs for a people who listen.” (10:67)

This also applies to true believers other than the Prophet (sa), as he said, “Strange are the ways of a believer for there is good in every affair of his and this is not the case with anyone else except in the case of a believer for if he has an occasion to feel delight, he thanks (God), thus there is a good for him in it, and if he gets into trouble and shows resignation (and endures it patiently), there is a good for him in it.” (Muslim 2999)

You may also like: Surah Maryam – A Walk With Maryam (Alayha Salam)

A Close Look at Surat al-Fatihah – Part 8
The Hidden Hikmah: How To Reap Benefits From Your Trials
4 Tips To Help Your Child Understand The Quran