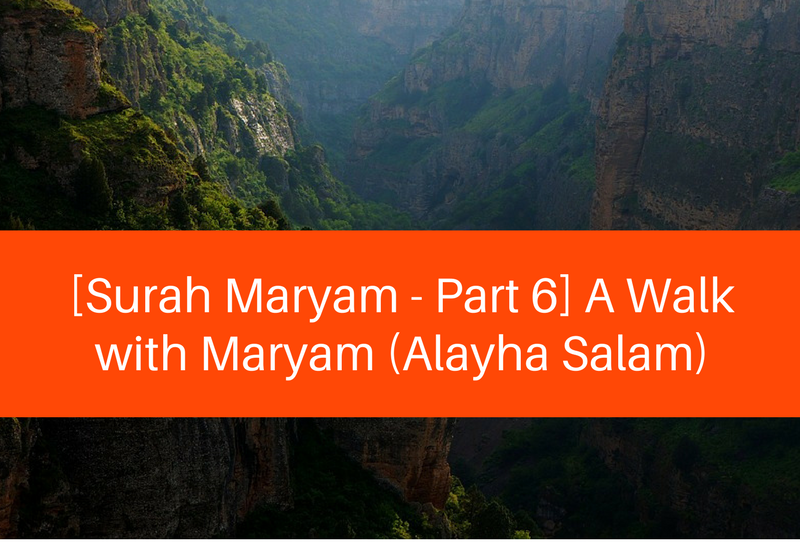 As we turn another page of Surah Maryam, verses 16-36 allow us a glimpse of the life and character of an exceptional women; Maryam (alayha salam). She is of the four women who were exclusively praised by Prophet Muhammad ﷺ.

Prophet Muhammad ﷺ said: “Sufficient for you among the women of mankind are Maryam bint ‘Imran, Khadijah bint Khuwailid, Fatimah bint Muhammad and Asiyah the wife of Fir’awn.” (Tirmidhi)

Maryam (alayha salam) will be of the leading women in Paradise. She was chosen by Allah for this noble status. The Quran states: “And [mention] when the angels said, “O Mary, indeed Allah has chosen you and purified you and chosen you above the women of the worlds.” (Surah Ale Imran; 42)

Now let’s go on a walk with her and learn the tips for success, so we may implement them in our lives and emulate her to earn the pleasure of Allah like she did. We will focus on the verses of Surah Maryam for these lessons.

“And mention, [O Muhammad], in the Book [the story of] Mary, when she withdrew from her family to a place toward the east. And she took, in seclusion from them, a screen. Then We sent to her Our Angel, and he represented himself to her as a well-proportioned man. She said, “Indeed, I seek refuge in the Most Merciful from you, [so leave me], if you should be fearing of Allah.” He said, “I am only the messenger of your Lord to give you [news of] a pure boy.” She said, “How can I have a boy while no man has touched me and I have not been unchaste?” He said, “Thus [it will be]; your Lord says, ‘It is easy for Me, and We will make him a sign to the people and a mercy from Us. And it is a matter [already] decreed.’

So she conceived him, and she withdrew with him to a remote place. And the pains of childbirth drove her to the trunk of a palm tree. She said, “Oh, I wish I had died before this and was in oblivion, forgotten.” But he called her from below her, “Do not grieve; your Lord has provided beneath you a stream. And shake toward you the trunk of the palm tree; it will drop upon you ripe, fresh dates. So eat and drink and be contented. And if you see from among humanity anyone, say, ‘Indeed, I have vowed to the Most Merciful abstention, so I will not speak today to [any] man.’ “Then she brought him to her people, carrying him. They said, “O Mary, you have certainly done a thing unprecedented. O sister of Aaron, your father was not a man of evil, nor was your mother unchaste.” So she pointed to him. They said, “How can we speak to one who is in the cradle a child?” [Jesus] said, “Indeed, I am the servant of Allah. He has given me the Scripture and made me a prophet.” (Surah Maryam: 16-29)

1) Build a Strong Relationship With Allah:

Maryam (alayha salam) chose Allah above all else. She had such a strong connection with Him that she secluded herself for worship and dedicated her whole life for Him. She chose the pleasures of the hereafter above the pleasures and comforts of this world. In reward, Allah (swt) the Most Appreciative (Al Shakoor) gave her a righteous son and made her a leader of the women of Paradise.

Ask Yourself: What kind of a relationship do you have with Allah? Do you ever think of Him? Do you remember Him only when faced with a difficulty?  Or do you remember Him and try to obey Him at all times and in all matters? How much of your capabilities and time have you dedicated for the sake of Allah and His religion? Give yourself a score out of ten.

When the angel came to Maryam (alayha salam) he was in human form. Imagine Maryam and how alarming and fearful this situation must have been for her. She did not know that it was an angel. However, what was her foremost reaction at this? Did she panic? No, she sought refuge in Allah and reminded the stranger to fear Allah.

As Muslims, when we are faced with something similar, a sudden mishap or onslaught, we should remember to first seek refuge in Allah; ask Him for help and use all available means to get out of the difficult state. However, only those who are always mindful of Allah are likely to think of Him in a stressful situation.

How difficult it is to go through pain all alone! When someone is in pain and distress the company of caring people brings comfort and ease. However, at times we do have to cross storms on our own.

When you are going through a tough time and there is no one beside you, to talk to, to share your feelings with and to help you, remember Maryam. Think of her and how she endured the pain of labour in addition to the psychological fear of facing the accusations of the society while she was alone. But Maryam remained steadfast and endured with patience because she knew that Allah was by her side. She was brave enough to face everyone because she had faith in Allah.

When you are fighting a similar battle, be patient and keep praying to Allah. He rewarded Maryam by blessing her with a Prophet as a child and by preserving her legacy in the Quran to be read by generations to come. If you preserve patiently, He will surely have a reward for you too – for indeed Allah rewards the patient ones abundantly.

It was the faith of Maryam, her relationship with Allah, patient perseverance and the willingness to sacrifice for Him that made her so special. Are you eager to follow her footsteps to reach the pleasure of Allah Almighty?