What Does Kareem Mean? 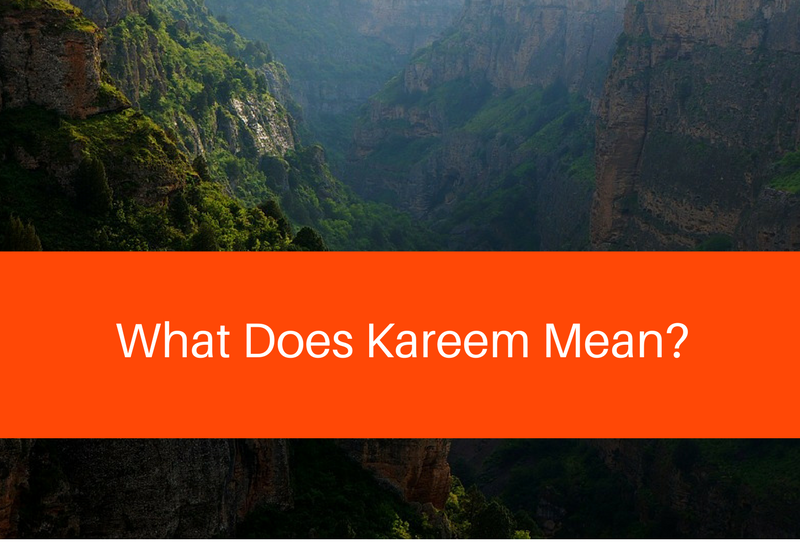 The word “kareem” means, according to Lisan al-Arab, means:

The structure of the word is such that it denotes permanence of the quality, as opposed to ‘dhaahib’ which means ‘a going-person’. A person is not always going to be on the move, but a generous person is generous by character, which is longer-lasting.

“And We had already tried before them the people of Pharaoh, and there came to them a noble messenger.” (44:17)

[That] indeed, the Qur’an is a word [conveyed by] a noble messenger [who is] possessed of power and with the Owner of the Throne, secure [in position], obeyed there [in the heavens] and trustworthy.” (81:19-21)

“Those are the believers, truly. For them are degrees [of high position] with their Lord and forgiveness and noble provision.” (8:4)

“But those who have believed and emigrated and fought in the cause of Allah and those who gave shelter and aided – it is they who are the believers, truly. For them is forgiveness and noble provision.” (8:74)

You may also like: 7 Sunnahs to Try Out in Ramadan

The name ‘Al-Karim’ as a name of Allah (swt) has come relatively few times in the Quran and sunnah. We find it in the following ayat:

“Said one who had knowledge from the Scripture, ‘I will bring it to you before your glance returns to you.” And when [Solomon] saw it placed before him, he said, “This is from the favor of my Lord to test me whether I will be grateful or ungrateful. And whoever is grateful – his gratitude is only for [the benefit of] himself. And whoever is ungrateful – then indeed, my Lord is Free of need and Generous.’” (Quran, 27:40)

Ibn Kathir (rh) explains in his tafsir the word ‘karim’ in the following way:

“Karim (Bountiful): He is Bountiful in and of Himself, even if no one were to worship Him. His greatness does not depend on anyone.”

“O mankind, what has deceived you concerning your Lord, the Generous, Who created you, proportioned you, and balanced you? In whatever form He willed has He assembled you.” (Quran, 82:6-8)

We also find this name of Allah in the dua which the Prophet (sa) taught Aisha (ra) to say on the night of al-Qadr.

“I said: ‘O Messenger of Allah, what is your view if I know when the Night of Al-Qadr is, then what should I say in it?” He said: ‘Say: “O Allah, indeed You are Pardoning, [Generous,] You love pardon, so pardon me (Allāhumma innaka `Afuwwun [Karīmun], tuḥibbul-`afwa fa`fu `annī).’” (Tirmidhi 3513)

Shaykh As-Sa’di categorises the name ‘al-Karim’ (The Kind) along with:

Al-Jawwad (The Bestower of Good)

Then he says, “All of these Names are close in meaning and all of them point to describing the Lord with mercy, generosity and kindness. They point to the great expanse of His mercy and gifts that encompass all that is existence, being granted in accordance with the dictates of His wisdom. The believers have been specifically singled out for this and they are granted a goodly and the best portion of this as Allah said, ‘My mercy encompasses all things and I shall decree it for those who have taqwa.’ (Al-A’raf (7): 156)”

Some variations of the roots of this same word also appear as names of Allah (swt) in the Quran, such as Akram and Dhul Jalali wa-l-Ikram.

You may also like: 10 Duas You Can Make During Ramadhan

Some Quran Quotes Addressing You
Maintaining Your Hajj Life After the Pilgrimage
Feeling Depressed, Anxious, Scared About Coronavirus? Here Are Some Things To Read and Remember

One response to “What Does Kareem Mean?”