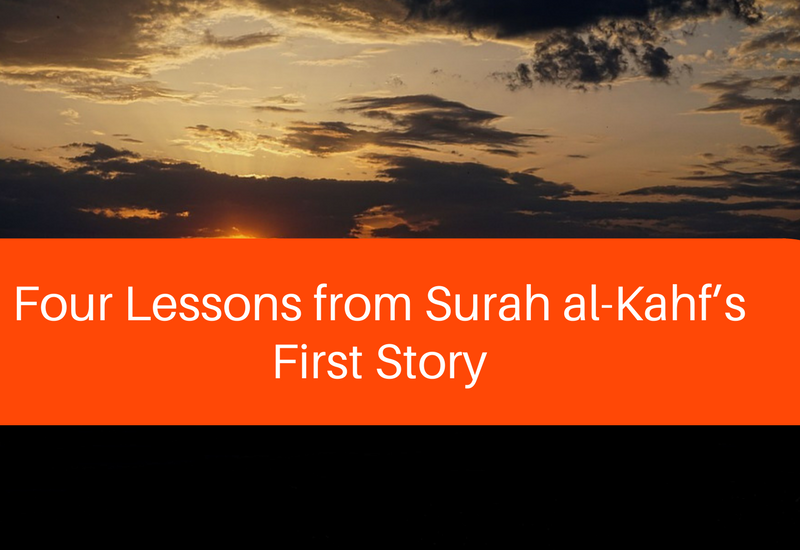 Surah al-Kahf contains four amazing stories with very deep and varied lessons. The first of them is the story of the Companions of the Cave.

Fugitives from the law because of abandoning their country’s official religion of polytheism, they flee and hide in a cave, where Allah (swt) causes them to fall asleep and remain so for three hundred years, to wake up hale and hearty.

Here are four lessons from this extraordinary story of the Quran.

Allah (Swt) begins this surah by mentioning the Quran’s being free of defect, its purposes, and the messenger’s reaction to the fact that many people don’t believe in it. After two more ayat, Allah (swt) starts the story with:

“Or have you thought that the companions of the cave and the inscription were, among Our signs, a wonder?” (18:9)

“… as if Allah is saying they thought that this was so miraculous even though they have something in front of them that is more worthy of being considered far more strange, shocking, and He is referring to Quran.”

When a person is asleep, paralysed or in a faint for a long time, the blood vessels on the compressed side of the body that is in contact with the bed begin to malfunction, beginning a slow process of muscular damage. In order to prevent the bodies of the youth of the cave from damage, Allah (swt) exposed them to the sun’s rays, but not directly so as to cause burns or eye damage etc., and turned them right and left. Allah (swt) mentions:

“And [had you been present], you would see the sun when it rose, inclining away from their cave on the right, and when it set, passing away from them on the left, while they were [laying] within an open space thereof. That was from the signs of Allah. He whom Allah guides is the [rightly] guided, but he whom He leaves astray – never will you find for him a protecting guide. And you would think them awake, while they were asleep. And We turned them to the right and to the left, while their dog stretched his forelegs at the entrance. If you had looked at them, you would have turned from them in flight and been filled by them with terror.” (18:17-18)

Allah (swt) bent the laws of physics by directing the sun’s rays in such a way as to give the cave perfect lighting. We also encounter many times this sunnah of Allah (swt) of protecting His righteous slaves in miraculous ways in the life of Prophet Muhammad (sa).

This point is highlighted in the debates that people fell into after the death of these youths – how many were they? How long did they remain in the cave?

The point of their story wasn’t to know how many they were. It was to focus on the Hereafter and resurrection after death.

“And similarly, We caused them to be found that they [who found them] would know that the promise of Allah is truth and that of the Hour there is no doubt…. “ (18:21)

But people forgot those important messages of the story and focused all their energy on arguing about trivial details.

Asking purposeless questions makes us focus on trivialities and distracts us from the truly important matters.

This is not to underestimate the value of seeking knowledge. In fact, Allah (swt) says in the Quran:

There are two types of ayat – the first is what we generally understand from the term, that is the ayat of the Quran. The second is the signs of Allah’s perfection, mercy, wisdom and other perfect qualities that can be found everywhere in the world of creations.

The youth of the cave had access to only the latter form of ayat. They didn’t know much about how to worship Allah, about fiqh or shariah. But what they did know was enough to make them special in the sight of Allah, so special that Allah (swt) quoted their conversations in His final miraculous Book, the Quran.

And what made them special wasn’t scholarly knowledge but the purity of their hearts, their love for Allah, their fearlessness and sacrifice for Allah’s sake.

In fact, they made use of the ayat of Allah found in the world of creations and became exemplary Muslims. It makes us wonder: we have access to those ayat and additionally to the ayat of the Quran, and yet where do we stand? We study rulings of Shariah, memorise Quran and duas, but where does all this knowledge take us? The people of the cave teach us to focus, not on merely acquiring plenty of knowledge, but on opening our hearts to the ayat of Allah.

Ramadan Special: A Dua About the Quran
SURAH Al-MULK - Part 1
Virtues of Studying the Quran