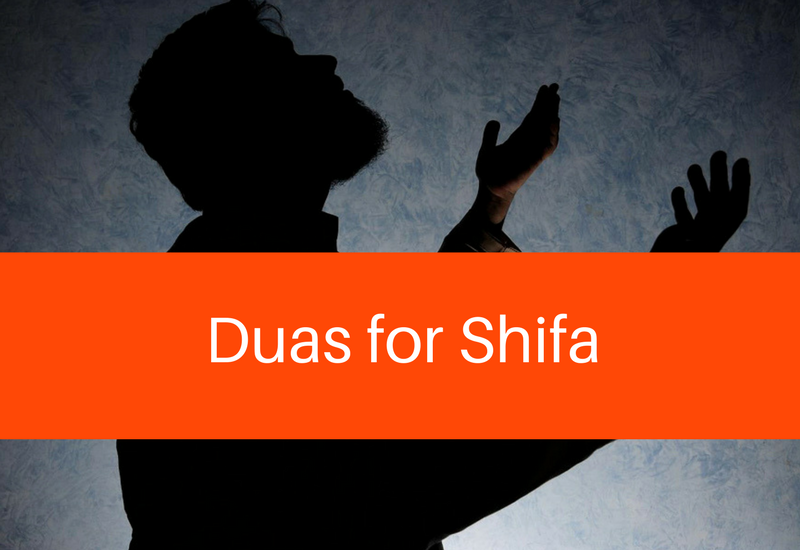 Illness – whether physical, psychological or spiritual – can turn our lives upside down. Suddenly, doing even the ordinary day-to-day activities becomes burdensome and difficult, denting our self esteem and happiness.

As Muslims though, we have been blessed beyond measure to receive guidance and help from Allah swt to deal with just about any distress or difficulty that befalls us.

A cure for everything

It was narrated from Abu Hurayrah (may Allah be pleased with him) that the Prophet (peace and blessings of Allah be upon him) said: “Allah has not sent down any disease but He has also sent down a cure for it.”  [Narrated by al-Bukhaari, 5678]

Now, let us look at some of the duas from the Quran and sunnah that will provide shifa.

Say bismillah by putting your hand on the part of the body that hurts.

You may also like: First Four Verses of Surah Duha

It was narrated from ‘Aa’ishah (may Allah be pleased with her) that when the Messenger of Allah (peace and blessings of Allah be upon him) came to a sick person or a sick person was brought to him, he would say: “Adhhib al-ba’s Rabb an-naas, wa’shfi anta al-Shaafi, laa shifaa’a illa shifaa’uka shifaa’an laa yughaadir saqaman (Take away the pain, O Lord of mankind, and grant healing, for You are the Healer, and there is no healing but Your healing that leaves no trace of sickness).” [Narrated by al-Bukhaari, 5351, Muslim, 2191]

It was narrated that Abu’l-Darda’ (may Allah be pleased with him) said: I heard the Messenger of Allah (peace and blessings of Allah be upon him) say: “Whoever among you suffers some sickness, or his brother suffers some sickness, let him say: ‘Our Lord Allah Who is in heaven, hallowed be Your name, Your will is done in heaven and on earth; as Your mercy is in heaven, bestow it upon the earth. Forgive us our sins. You are the Lord of the good. Send down some Your mercy and healing upon this pain,’ and he will be healed.” [Narrated by Abu Dawood (3892); classed as saheeh by al-Haakim in al-Mustadrak(4/243) and as hasan by Ibn  Taymiyah in Majmoo’ al-Fataawa (3/139)]

It was narrated from Abu Sa’eed al-Khudri (may Allah be pleased with him) that some of the companions of the Prophet (peace and blessings of Allah be upon him) came to one of the Arab tribes. They asked them for hospitality but they refused to welcome them. Whilst they were like that, the chief of that tribe was stung. They said: ‘Do you have any remedy or someone who can recite ruqyah?’ They said: ‘You did not offer us hospitality, so we will not do anything until you give us something in return.’ Then they agreed upon a flock of sheep. Then he started to recite the Essence of the Qur’an – i.e., Surah al-Faatihah – and he collected his saliva and spat at him (at the site of the injury), and he recovered. The sheep were brought and they (the companions) said: We will not take them until we ask the Prophet (peace and blessings of Allaah be upon him). So they asked him and he smiled and said: “How did you know that it is a ruqyah? Take them and give me a share of them.”  [Narrated by al-Bukhaari, 5404; Muslim, 2201]

Whoever is guided by Allah and is given good insight to understand the deep meaning of this surah and what it contains of Tawheed, understanding of the Divine nature, the names, attributes and actions of Allaah, the Divine decree, the Resurrection, rejecting any misconception that undermines the concept of the Oneness of the Divine Lordship and Divine nature, complete trust in Allah and referring all one’s affairs to the One Who has full control of all things – to Him be all praise, for all goodness is in His hand and to Him all things return – and feeling in need of Him in seeking guidance that is the root of happiness in this world and in the Hereafter, will realize the connection between the contents of this surah and bringing good and warding off evil. He will understand that ultimate goodness and blessing is connected to this surah and is dependent upon understanding it and acting upon it. Then this surah will make him independent of many other kinds of medicine and ruqyah, and it will open the door to a great deal of goodness and ward off a great deal of evil. [Zaad al-Ma’aad, 4/347]

Mu’ammar said: I asked al-Zuhri how he used to blow and he said: He used to blow on his hands then wipe his face with them.  [Narrated by al-Bukhaari, 5403; Muslim, 2192]

It was narrated from Ibn ‘Abbaas (may Allah be pleased with him) that the Prophet (peace and blessings of Allah be upon him) said: “The one who visits a sick person who is not dying, and says seven times in his presence, ‘I ask Allah the Almighty, the Lord of the Mighty Throne, to heal you,’ Allah will heal him from that sickness.” [Narrated by Abu Dawood (3106); classed as saheeh by al-Nawawi in al-Adhkaar (p. 180) and by al-Albaani in Saheeh Abi Dawood]

Recite al-Faatihah and al-Mu’awwidhaat, and know that in the whole Qur’an there is healing, as Allah says (interpretation of the meaning):

“And We send down of the Qur’an that which is a healing and a mercy to those who believe (in Islamic Monotheism and act on it), and it increases the Zaalimoon (polytheists and wrongdoers) nothing but loss” [al-Isra’ 17:82]

Expiation for Your Sins

Illness can make us lose hope in ourselves and in the world around us. However, a Muslim takes any calamity in his stride, knowing that there is a greater good that’s awaiting him/her.

Abu Sa’eed al-Khudri and Abu Hurayrah that the Prophet (peace and blessings of Allah be upon him) said: “No tiredness, exhaustion, worry, grief, distress or harm befalls a believer in this world, not even a thorn that pricks him, but Allah expiates some of his sins thereby.” [Narrated by al-Bukhaari, 5318 and Muslim, 2573]

Therefore, for any pain, illness or distress you feel, remind your heart that Allah out of His mercy, is forgiving you for your sins.

Imagine having a book filled with good deeds – minus all the sins – to be presented on the Day of Judgment when you are being held accountable?

So the next time you feel sad or depressed because of your illness, imagine the scene on the Day of Judgment when your book is given in your right hand!

May Allah give shifa to all those who are suffering from any kind of illness, big or small, ameen.

Disclaimer:  Medical intervention, counseling, intake of prescribed medicines and psychological sessions are necessary to treat different types of illnesses and diseases. Please contact your doctors or medical professional and seek help, while putting your trust in Allah that it is He alone who cures, either through medicines and/or duas that have been mentioned here.

Related Video: Dua – The Tool for Asking What You Want – Nouman Ali Khan

How to Recite the Qur’an like a Qari (reciter)
5 Istighfar Duas from the Quran and Sunnah
An Nawawi’s Hadith #1: All Actions Are By Intentions

2 responses to “Duas for Shifa”