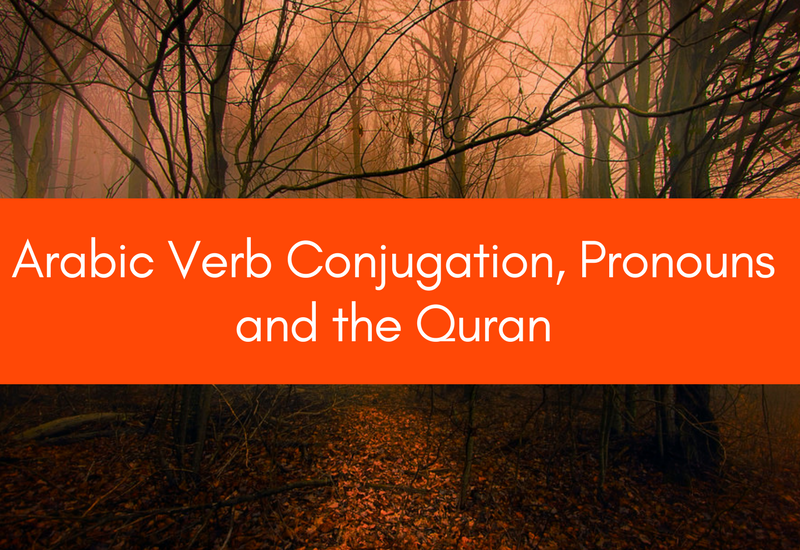 Note: The reader is assumed to have a basic understanding of Arabic verbs and pronouns.

When studying the sciences of Arabic grammar and morphology, we often lose sight of the big picture. We get so immersed into learning the past and present, the active and passive, the singular and plural, that we forget the reason we’re studying all this.

What is that reason? It is understanding the Quran, primarily. One might argue that a beginner student of Arabic can’t hope to understand anything of the Quran yet. That’s not completely true. Even the basic rules of grammar can be put to use. This article attempts to propel the beginner into trying and testing his learning, putting it to practical use, and getting more curious about the Quran.

In Arabic, there is an extra number apart from the singular and the plural – the dual. Whenever you mention two people, you have to use the dual instead of the plural. This doesn’t exist in English and often creates difficulties in translation.

So you’ll find it sometimes translated as “they (both)” or “you (both)”, and sometimes not mentioned at all.

A classic example of this is Surat al-Rahman, in which Allah address two people, or groups of people, throughout the Surah. For example, the ayah that is repeated many times:

“There will be sent upon you a flame of fire and smoke, and you will not defend yourselves.” (55:35)

Also, in the story of Musa and Harun, Allah (swt) commands Musa (as) to go to Firawn and call him towards submission to Allah:

Then Musa (as) makes his amazing dua, and at the end asks Allah (swt):

“And appoint for me a minister from my family – Aaron, my brother. Increase through him my strength And let him share my task…” (Quran, 20:29-32)

Then Allah (swt) grants him his wish, and then repeats His command of going to Firwan. But this time, there’s a subtle difference in His command. See if you can spot it:

In Arabic, the Command form indicates both gender and number, neither of which is apparent in English. For example, consider the following situation. Then Aziz finds Yusuf (as) being seduced by the former’s own wife. He tries to apologize to Yusuf (as) for this, saying:

There is no mention in the ayah whom the second command is addressing. But the single letter ya at the end of the word indicates that the command is being given to a female, and Aziz’s wife is the only female there.

“By the sun and its brightness”

“And [by] the moon when it follows it”

“And [by] the day when it displays it”

When the brothers of Yusuf (sa) come to him in Egypt a second time to ask for food, not knowing that he’s their own brother, Allah inspires Yusuf (as) to put a drinking bowl (siqayah) into his brother Benyamin’s bag. (Refer to Surah no. 12 for the whole story). Note that the word ‘siqayah’ is feminine.

“So when he had furnished them with their supplies, he put the siqayah into the bag of his brother. Then an announcer called out, ‘O caravan, indeed you are thieves.’” (12:70)

The brothers turned back and asked:

Now notice what the king’s men reply. What they are missing is not a siqayah, but a suwa’. Many scholars of tafsir consider these two as the same thing. But my teacher Shaykh Akram Nadwi doesn’t agree. He argues, based on the different pronouns used for these two words that they are different things.

See if you can figure out how that is. Note that the word ‘suwa’’ is masculine.

You may also like: How to Reap Benefits from your Trials

Essential Duas Before Studying for Your Exams
[Surah Maryam – 4] Duas – Turning the impossible into possible!
6 Facts About Surah Qadr

One response to “Arabic Conjugation (Verb), Pronouns and the Quran”