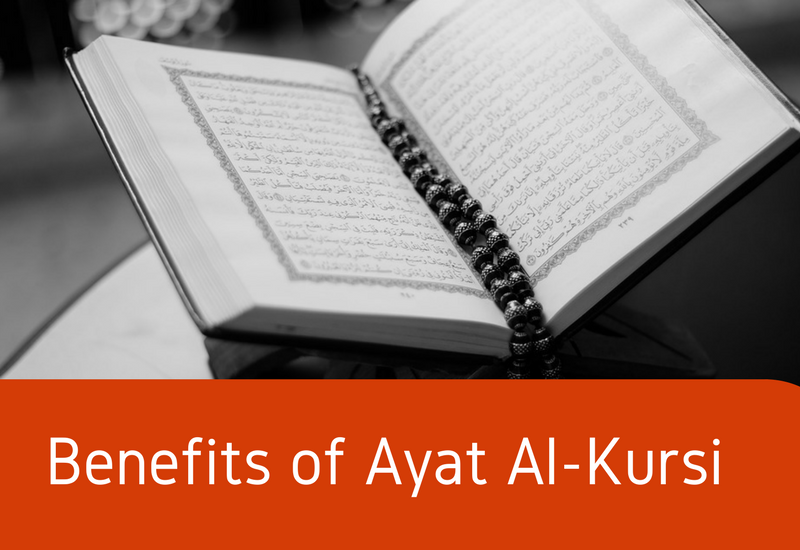 Several narrations from the hadith of the holy Prophet (saw) have described ayat al-kursi as the greatest verse that was revealed to the Prophet (saw), according to the Prophet himself. Why is this verse so important to our daily lives as Muslims? Apart from containing names and praises of Allah (swt), there are so many benefits of reciting ayat al-kursi and we share some below so that you can make it a part of your day and earn a lot of rewards.

The Full Text of Ayat al-Kursi

Allah – there is no deity except Him, the Ever-Living, the Sustainer of [all] existence. Neither drowsiness overtakes Him nor sleep. To Him belongs whatever is in the heavens and whatever is on the earth. Who is it that can intercede with Him except by His permission? He knows what is [presently] before them and what will be after them, and they encompass not a thing of His knowledge except for what He wills. His Kursi extends over the heavens and the earth, and their preservation tires Him not. And He is the Most High, the Most Great. (Qur’an 2:255)

Ayat al-Kursi is a means to enter Paradise

In a narration by Abu Umaamah, the holy Prophet (saw) was quoted to have said: “Whoever recites Aayat al-Kursiy immediately after each prescribed prayer, there will be nothing standing between him and his entering Paradise except death.”

Imagine that all you had to do to gain paradise is to recite ayat al-kursi after every obligatory salah? Wouldn’t that motivate you to remember to recite the verse after every prayer? There are many ways to enter paradise and even though the most important factor for entering paradise is the mercy of Allah (swt), this is a great benefit of reciting ayat al-Kursi and we should take advantage of it.

Ayat al-Kursi as a means of protection

Think of this as a twenty-four-hour protection from harm when you recite ayat al-Kursi once in the morning and evening. This is us literally putting our protection in the hands of our creator using the greatest verse of the holy Qur’an.

In a different narration, the holy Prophet mentioned that whoever recites surat ul Baqara, shaytan will not be able to enter the person’s house. This is the surah that contains ayat al-Kursi, and because of its length and the power of ayat al-Kursi, many people interpret this to mean that reciting Ayat al-Kursi prevents shaytan from entering the home.

As Healing from the evil eye

In the practice of ‘ruqya’ (treatment for someone afflicted with the evil eye, magic, or possessed by a jinn), one of the verses recommended to be recited for the person afflicted is ayat al-Kursi.

During the life of the holy Prophet (saw), it was said that a Bedouin man came to the Prophet to complain about his brother who had a mental derangement. Part of the verses that the Prophet recited for the brother was ayat al-Kursi, and by the mercy of Allah (swt), the man was cured. It should be noted here that mental derangement is not the same as mental health challenges that will require medical treatment.

In some cultures, it is common to find people using different superstitious objects to protect themselves from evil. But as Muslims, we know that our protection only comes from Allah (swt) and this is why it is important for us to make ayat al-Kursi our weapon of protection against shaytan and every form of harm.

To summarize these gems, here is a recap of some of the benefits that we get when we constantly recite ayat al-Kursi:

1)   A person who recites ayat al-Kursi after every obligatory salah will enter paradise if Allah wills.

2)   Anyone who recites ayat al-Kursi in the mornings and evenings will be protected from all forms of harm if Allah wills.

3)   Whoever is afflicted with the evil eye or magic can be cured by the recitation of ayat al-Kursi.

4)   The recitation of Baqarah, the chapter that contains Ayat al-Kursi protects your home from shaytan.

If you haven’t already, these benefits are enough motivation to get any Muslim to make ayat al-Kursi a constant part of their supplication, their obligatory prayers, bedtime routine, and even encourage the recitation at home so that every member of the family can benefit.