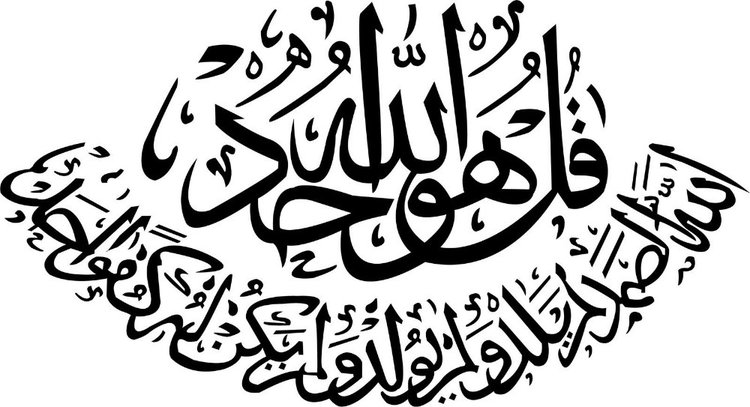 The last juz of the Quran consists of one of the exemplary Surahs which, although is amongst the shortest ones, has the most profound implications. Surah Ikhlas is a Meccan Surah and is one of the earliest revelations of the Quran. It was revealed on the occasion where the pagans and polytheists questioned the Prophet Muhammad ﷺ to explain the genealogy of his Lord. The following Hadith narrates this:

It was narrated on the authority of Ubayy ibn Ka’b (may Allah be pleased with him) that the polytheists said to the Messenger of Allah ﷺ , “Tell us the lineage of your Lord.” In response, Allah the Almighty revealed (what means): {Say, “He Is Allah, [Who Is] One, Allah, the Eternal Refuge. He neither Begets nor Is Born. Nor is there to Him any equivalent} (Quran 112:1-4) [Ahmad and At-Tirmizi]

The word Ikhlas has been derived from its root word kh-l-s which means, refined or purified. This chapter is the essence of Islam and central to the message that the Prophet Muhammad ﷺ was sent to spread. This Surah has several nicknames as associated by the Sahabas. Below are some of the following names:

This is answered in the 112th chapter of the Quran i.e., Surah al Ikhlas. Thereafter the last two surahs of the Quran are an offshoot to this chapter. This chapter elaborates on the aspect of ‘tawheed’, while chapter 113th, Surah al Falaq (the Dawn) and chapter 114th, Surah an Nas (the People) explain how shirk & evil thoughts destroys tawheed (these chapters provides for a solution to protect oneself against such destruction).

The 110th chapter of Quran, Surah an Nasr (the Help), is a reminder to people to remember their obligation towards the Almighty and a direction as to not forget the agenda of conflict in the eyes of victory. If men forgot what they had fought for (tawheed, and so the reference to Surah al Ikhlas), the celebration of victory would be hollow and meaningless. Thus, we can see how the last portion of the Mushaf is interconnected and inter related in the manner it is arranged.

You may also like: What is Success in Islam and How to Attain It?

Say: He is Allah, The One and Only;

The very first verse of this chapter makes a profound declaration that He is Allah, the one and only. The context of its revelation gives us a perspective that we need to understand the importance of this statement. Through this verse, Allah has asked his Messenger Muhammad ﷺ to proclaim that the Almighty is Allah and He is the only one worthy of worship.

The Arabic word ‘ahad’ and ‘wahid’, both being the names of Allah have the same etymological origin, which means ‘oneness’. However, the difference between the two is of extreme relevance.

The word ‘wahid’ is the Arabic word for number one. Through this, we are to understand the attribute of Allah being only one who is deserving of being worshipped and has no partner in divinity. The word ‘ahad’ on the other hand conveys uncountable oneness. It stands for a singular, unique entity. Thus making the word name Al-Ahad more exclusive in its meaning than the name Al-Wahid. Thus, it is proclaimed that Allah is absolutely singular in His essence and unique in His attributes. ‘Ahad’ is more eloquent and emphatic in expressing the concept of ‘oneness’ and is exclusive in the negative sense.

Allah is a ‘personality’ and not a mere conception of some kind of philosophy. This verse also negatives any idea of polytheism that creeps into some belief systems. Allah declares that He is the only one worthy of worship. He is incomparable without any beginning or any end, unlimited by time, space or circumstances. Allah is our Creator and He is a reality before which all others have no existence.

God, the Eternal Besought of all;

The second verse of this chapter is unique in its own manner. This verse makes the mention of the word ‘Samad’ which is most appropriately translated to mean, the ‘self-sufficient. The word ‘Samad’ is not mention in any other verse of the Quran. This Attribute of Allah describes Him to be the one who has no partner and one who is independent of anyone.

Imam Husain ibn Ali (may Allah be pleased with him) in a tradition associates the following five meanings for ‘samad’:

Abu Bakr al-Anbari relates, “there is no difference of opinion among the lexicographers that Samad is the chief who has no superior and to whom the people turn to for the fulfillment of their desires and needs. Az- Zajjaj holds a similar viewpoint and says “Samad is he in whom leadership has been perfected and to whom one turns for the fulfillment of one’s needs and desires.”

The word Samad has attributed Allah to be devoid of all the humanly aspects such as will to eat, sleep, dependency, etc. The word has a vast meaning and encompasses perfection unto Him. It can be used to describe Allah as the one whose dignity and sovereignty reaches the extent where all other things in existence depend on for all their needs. Thus through this verse, perfection of Allah, self-sufficiency of Allah, and other independent (amongst other) attributes of Allah were crystallized.

He begetteth not, Nor is He begotten;

Allah says in Surah Al- Kahf  that, “Further that He may warn those (also) who say, God hath begotten a son; No knowledge have they of such a thing, nor Had their Fathers. It is A grievous thing that issues from their mouths as a saying. What they say is nothing But falsehood!”

Time and again people have tried to spread that God has a son and has humanly aspects to him. Allah declares himself and refutes these ideas.

Also, when questions  were raised as to who Allah is and to explain his genealogy, Prophet Muhammad ﷺ grew very angry, Jibril (AS) then calmed him down and brought forward this chapter. The third verse clearly asserts that Allah neither begets nor has he begotten. Unfortunately, the plurality of God and the concept of God marrying and reproduction have been found in several religions.

Surah Yunus (chapter 10:68), asserts, “They remarked: Allah has taken a son to himself. Allah is All-pure: He is self-sufficient. He is the owner of everything that is in the heavens and the earth. Have you any authority for what you say? What do you ascribe to Allah that of which you have no knowledge”?

Thus, associating physical attributes to Allah as that of procreation is misleading and false for this tries to equate human and God, which is impossible. The word ‘lamyalid’ as Imam Husain ibn Ali (may Allah be pleased with him) puts it, means that there emitted nothing from Him- neither material things nor a child, nor other things that emit from creatures, nor a delicate thing like a soul. Allah is above and beyond all the humanly associations or any qualities of material.

The last verse of this Surah proclaims a profound answer to every question of the disbeliever. Allah is unique and there is none like Him. No creation of Allah possesses even a hint of attributes of the Almighty. The Creator is perfect and devoid of any characteristics or actions that have human association. The term ‘kufuwwan’ refers to equivalence and it is declared that Allah is not similar or equal to anyone.

The Quran is a book like no other. It is wondrous that the most subtle of messages of Islam are transcribed through the smallest of verses. It tells a great deal of how important it is to mend our acts no matter how small. This chapter of the Quran consists of the pure and refined message of Allah. According to a tradition, the Messenger of Allah ﷺ has proclaimed that the heavens and the earth are founded on ‘Qul huwa Allah Ahad’ or Tawheed. It is one of the shortest chapters of the Quran and yet so profound & magnanimous in its implications!

Related Video: Al Ikhlas – One of the Most Powerful Surahs | Yasir Qadhi

The First Revelation and its Glory
Al Wakeel: The Ultimate Trustee
Lessons From the Advice of Luqman

2 responses to “Importance of Surah Ikhlas”