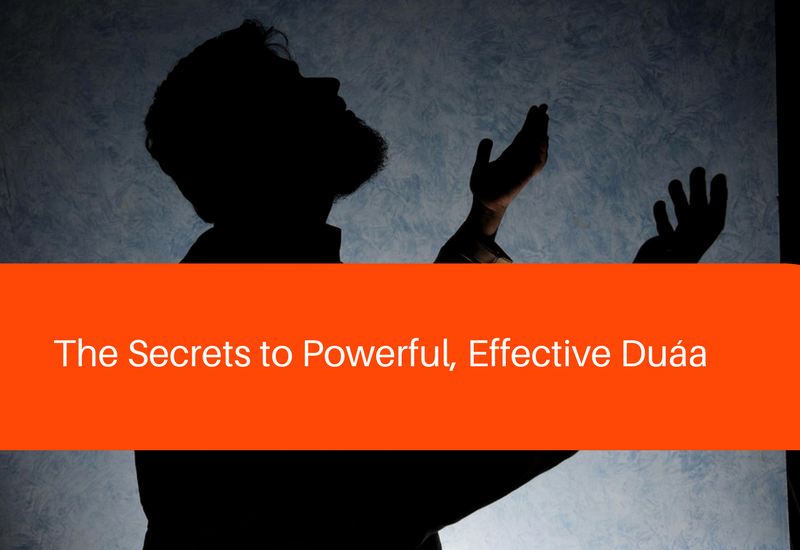 “And your Lord says: Call on Me; I will answer.”

One of the biggest and most profound blessings we have as Muslims is our immediate access to Dua’ (ie: Prayer to Allah requesting something). Not only is it a critical aspect of worship (‘ibadah), but Dua’ is also one of the most powerful tools we can hold as Muslims; it can reap tremendous benefit if properly utilized.  It is therefore of paramount importance to know how to make the best use of this great blessing.

Here are 12 tips that you can harness to make your Dua’ more powerful and effective, insha’Allah.

1- Acknowledge the power of Dua’.

Before even starting, it is important to understand the power sincere Dua’ holds. It is said that Dua’ can race fate itself. If it combines strong enough faith with adequate persistence, Dua’ can hold great power because there is no end to Allah’s power. If He wills something, it will happen.

Allah SWT says in Surat Yasin: “His command is only when He intends a thing that He says to it, “Be,” and it is.” “إِنَّمَا أَمْرُهُ إِذَا أَرَادَ شَيْئًا أَن يَقُولَ لَهُ كُن فَيَكُونُ”

So start with firmly believing that.

2- Grasp the depth of Allah’s mercy.

Remember that whatever cruelty you are facing on Earth, no matter how great your pain or suffering, and no matter how indifferent His creations on Earth may be to it, He, feels it. He, is inherently, the Most Merciful. He is all Mercy. He is all Compassion. He is all Empathy. If you talk to Him, in silence or with words, He will be the first to hear you. He wants you to seek His help.

Among the famous examples of Duá that was answered by miracles on Earth is that of Zakkariya PBUH. He discreetly addressed the Merciful Creator expressing his old age and his wife’s sterility and desire to have a son. In Surat Maryam it is said about Prophet Zakkariya: “When he called to his Lord a private supplication. He said, “My Lord, indeed my bones have weakened, and my head has filled with white, and never have I been in my supplication to You, my Lord, unhappy.”

He asked for a son and his wish was granted with not only a son, but one who became an inspirational Prophet. This is a a beautiful expression of how weakness to Allah through sincere expression of emotion can bring actual miracles into the world!

Allah SWT says in Surat Al Baqarah: “When My slaves ask you concerning Me, then I am indeed near, responding to the invocations of the supplicant if he calls on Me.”

Prophet Muhammed PBUH says: that Allah, the Master is so generous and feels shy returning a slave’s hand empty after they were raised to Him. The exact script is:

3- Start and end with a clean slate.

A useful practice is to always begin and conclude Duá with “thanaaa ‘ala Allah”.

“Allah put a great distance between me and my sins as great as the distance You have made between the East and the West. O Allah, cleanse me of sin as a white garment is cleansed from filth. O Allah, wash away my sins with snow and water and hail.”

4- Clarify your need – Khushoo’. Complain to Him.

Remember why you need him. Remember what you need. Gather all your pain, your fears, your wishes and hopes, in one place, in one moment.  Try to feel sincere khushoo’ (state of heart).

Now, prepare to ask with confidence.

God has 99 names. Call Him by the names He loves. If this has an effect on humans, do you not think it will have an effect with the Creator Himself? Compliment Him with His names.

All times are times when Allah can hear you when you address Him. However, there are some particularly significant times of the day, when Dua’ is especially more likely to be answered. Use these times strategically. These times include:

When you pray or perform Dua’, foster the mindset that what you are asking will happen and that you are certain of Allah’s positive response.

Allah SWT states in Hadith Qudsi: “I am as My servant thinks I am.”  أنا عند ظن عبدي بي

9- Visualize it with every fibre of your being. Add details.

The last point of actually performing Dua’ is the power of visualization.

Visualize what you are asking and let this point link to the one above. Add details to your visualization and know that He can grant this image in your head, if it is good for you.

8- Appreciate Ibtilaa and use it to your advantage.

Difficult experiences and Ibtilaa can be the biggest blessing from Allah SWT. They are an opportunity to bring you closer to Him. It emphasizes the sense of need and poverty to Him. Dua’ is one of the most rewarding forms of worship because it can be at its strongest at times when you are in anguish. It is also said that the prayer of a victim (mathloom) is not refused. Use difficult moments, bad experiences, and tests from Allah SWT to your advantage.

Among the most famous examples of Prophets who saw Ibtilaa’ and faced it with patience is Sayidna Ayub. In the end, when he turned to Allah, the most Merciful, he was immediately answered.

Another example of this is Yaçub PBUH, the father of Sayidna Yusuf, as he grieved and mourned the loss of his son to Allah for years on end. He would say: “”I only complain of my anguish to Allah, and I know from Allah that which you know not.” As we all know, his son was returned to him in his lifetime.    “ قَالَ إِنَّمَا أَشْكُو بَثِّي وَحُزْنِي إِلَى اللَّهِ وَأَعْلَمُ مِنَ اللَّهِ مَا لا تَعْلَمُونَ”

Repetition is a keyword.

Meaning: those who repeat with conviction, without losing patience. Repeat within the same session and repeat the frequency of times that you actually ask for what you want. Do not give up. Even if you do not see what you are asking now, be sure that there is benefit coming out of your dua’.

Dua’ is for both good times and bad times. Make it a habit.

11- Trust in Allah: Be careful what you wish for.

Have faith that the best will come to you from Duá; even if it is to protect you from damage you do not foresee that could occur to you from your very specific request. Know that you are human. Your knowledge and foresight is incredibly limited, whereas He knows and sees all. If He is protecting you from answering something in particular, it is most certainly in your best interest. Allah SWT does not prevent good from happening, He protects us from bad. This is the truth of all truths.

Allah SWT says in Surat al Baqara: It is possible you may dislike something which is good for you, and that you love a thing which is bad for you, yet Allah knows, and you know not.

12- Indisputable fact: All Dua’ is answered

There is no such thing as my Duá was not answered. Remove that phrase from your dictionary. It is a myth. It does not exist.

The fact is that since Duá is also a form of worship, there is reward for it. And all Duá brings good to you in many forms. Prophet Muhammad PBUH says that any Duá that reaches Allah is responded to in one of three forms. A) Either Allah responds and grants it in Dunya (this current life), B) Or it is saved for an even greater good in Al-Akhira (afterlife), C) Or Allah uses it to protect His creation from something of equivalent value and significance.

Allah is close. You can talk to him now. Duá can take many forms and can be done anywhere.

So, what are you waiting for?

Related Video: How to Make Dua with Perspective – Omar Sulieman

How to Attain Taqwa – Part III
Surah Zalzalah – A Comprehensive Study
Hadith #12: Leave That Which Does Not Concern You....

Want more Quran inspirations and resources sent to you weekly? Join Quran Academy's newsletter and also get this FREE EBOOK on 7 Essentials Steps to Memorize the Quran!