Companionship With The Qur’an In The Month Of Qur’an 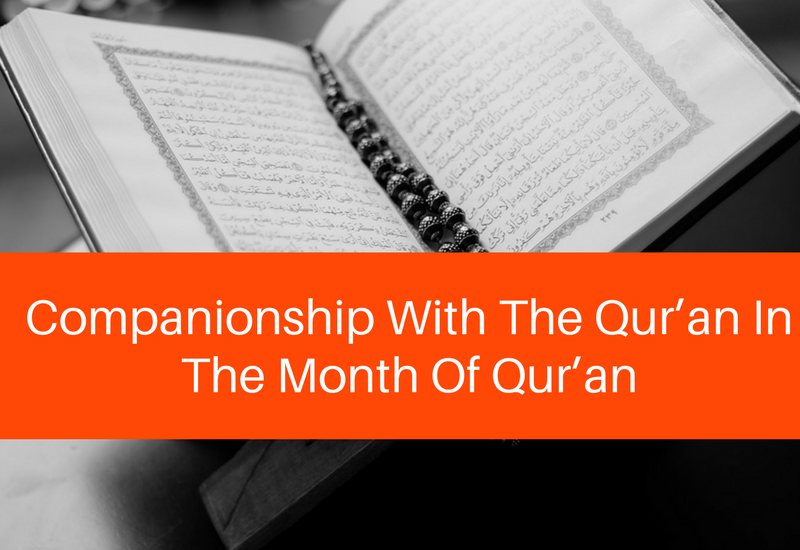 Ramadan is the month of the Qur’an. Qur’an is a book that was revealed as a guidance for mankind distinguishing the right from the wrong. As Allah (swt) says in the Qur’an,

“The month of Ramadan in which was revealed the Qur’aan, a guidance for mankind and clear proofs for the guidance and the criterion (between right and wrong)…”[Qur’an Ch2 : v185]

Qur’an should be our closest companion, not just in Ramadan but all throughout the year. Just like we seek counsel from a dear friend, we should make a habit to turn to the Qur’an to seek counsel for all our problems. Qur’an has the solution to all problems of mankind, only if we care to read it with understanding. If we make Qur’an our companion in this world, it will be our companion on the Day of Judgment and it will bring honor for us and our parents.

“The Qur’an will meet its companion on the Day of Resurrection when his grave is opened for him, in the form of a pale man. It will say to him, ‘Do you recognize me?’ He will say: ‘I do not recognize you.’ It will say: ‘I am your companion the Qur’aan, who kept you thirsty on hot days and kept you awake at night. Every merchant benefits from his business and today you will benefit from your good deeds.’ He will be given dominion in his right hand and eternity in his left, and there will be placed on his head a crown of dignity, and his parents will be clothed with priceless garments the like of which have never been seen in this world. They will say: ‘Why have we been clothed with this?’ It will be said: ‘Because your son used to recite Qur’aan….’ [Musnad Ibn Ahmad and Ibn Maajah in al-Sunan]

Attitude of the Prophet, Sahaba and the Salaf

It was the practice of the Prophet (pbuh) and the Sahaba to spend maximum time in the recitation of Qur’an during Ramadan. Prophet (pbuh) used to recite the Qur’an to Jibra’il (AS). Uthman Ibn Affan (RA) used to complete reciting one Qur’an each day. Abu Qatadah (RA) regularly completed the Qur’an every 7 nights, but in Ramadan he completed it every 3 nights and during the last 10 days, he completed it every night.

Some of the salaf completed the Qur’an in their qiyam and at other times every three nights, others in every seven or ten nights. When Ramadan came, Az-Zuhri used to leave his study circles and dedicate his time to Qur’an recitation.

Practical tips to establish companionship with the Qur’an:

Don’t read the Qur’an too little or too quickly

Some Muslims are in the habit of completing the Qur’an 2-3 times reading it with intense speed, sometimes even neglecting the rules of Tajweed.  While others may be reciting too little of the Qur’an. The correct practice is to dedicate as much time as you can to recite the Qur’an correctly and beautifully as recitation of Qur’an carries a great reward, which will be multiplied in Ramadan.

Prophet (pbuh) said: “Whoever reads a letter from the Book of Allah will receive a hasanah (good deed) from it (i.e. his recitation), and the hasanah is multiplied by ten. I do not say that Alif-Laam-Meem is (considered as) a letter, rather Alif is a letter, Laam is a letter, and Meem is a letter.” [At-Tirmidhi, Ad-Darimi]

Instead of keeping your goal to finish Qur’an many times, try to complete reciting the Qur’an one time with understanding (using Qur’an translations if you do not know the Arabic language).

Bishr bin as-Sirri said: Verily, each verse is like a date: the more you chew it, the more of its sweetness is released.”

Qur’an is a miracle sitting in our shelves. It has the power to transform our lives, as it transformed the lives of the Sahaba making them rulers of the world. When we don’t read the Qur’an with understanding, we miss out on the guidance, the sweetness and the miracles present in the Qur’an.

Have family time with the Qur’an

Involve your family in understanding and contemplating over the Qur’an. Sit with your spouse and kids at a convenient time and study the Qur’an with them. This will bring lots of barakah in your home and plant the seeds of righteousness in your children.

Prophet (pbuh) said, “When a group of people assemble for the remembrance of Allah, the angels surround them (with their wings), (Allah’s) mercy envelops them, Sakinah, or tranquillity descends upon them and Allah makes a mention of them before those who are near Him.” [Muslim].

At times when you are unable to read Qur’an, such as while driving, cooking, doing other chores, have the recitation and tafseer (explanation) of Qur’an playing in the background. This will enable you to constantly be in companionship with the Qur’an. Once I had witnessed a mother in a hospital receiving an IV drip. She had her 6 year old daughter beside her and she was teaching her the tafseer of Surah Burooj while lying on the hospital bed. We can always find time for Qur’an, if we intend to.

Make an intention to memorize a small portion of the Qur’an every day, preferably Juz Amma (Chapter 30). This will enable you to recite different Surah in each prayer and longer Surahs in Taraweeh and Tahajjud. The best reward for memorizing the Qur’an is that the more you memorize, the higher will be your status in Paradise.

Prophet (pbuh) said: “It will be said to the companion of the Qur’aan: Recite and rise in status, recite as you used to recite in the world, for your status will be at the last verse that you recite.” [Al-Tirmidhi and Abu Dawood]

Memorize translation of Surahs and Azkar read in Salah

The real purpose of Salah is to worship and communicate with Allah (swt). Prophet (pbuh) has said in a hadith qudsi that prayer is like a conversation between Allah and his slave; when a slave recites each verse of Surah Fatiha, Allah (swt) replies to his slave. One cannot achieve the peace and happiness acquired by worshipping Allah (swt) if he does not pray with Khush’oo. One of the steps of attaining Khush’oo is to understand what is being recited in Salah. Try to memorize the meanings of the azkar recited in Salah to truly benefit from your Salah. Otherwise, it may be no more than a cardio workout for you.

‘When a servant prays the prayer as it should be prayed it rises to Allah having rays like the rays of the sun and it says to its performer, ‘May Allah preserve you as you have preserved me‘. If it was lax and lazy in performing it, it will be wound up like an old garment is wound up and then used to strike the face of its performer while saying ‘May Allah waste you as you have wasted me!” [Tabarani]

Keep your tongue engaged in Zikr at all times. You can recite Durood, tasbeeh, tahmeed and tahleel, azkaar of morning and evening, various other azkaar carrying enormous benefits. Keep yourself in a state of Ibadah even when you are engaged with physical work by keeping your tongue moist with the remembrance of Allah.

These were a few suggestions from us to establish companionship with the Qur’an. Share your suggestions below as to how we can give Qur’an its due rights.