Sadaqah And Zakah – A Goodly Loan For The Hereafter 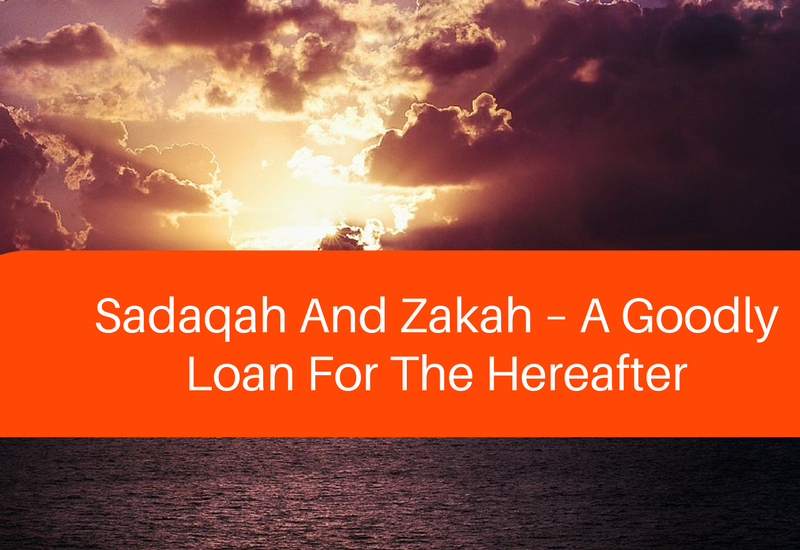 Among the most touching purposes of Ramadan is to feel the pain of the poor and needy, by staying away from food and then give them a helping hand by giving them Zakah. Through this month, Allah commands us in different ways to feed and help the poor. The various ways include:

Zakah is the obligatory charity paid by all Muslims who meet the requirement to pay it. Zakah is a form of purification and protection for one’s wealth. If a Muslim is entitled to pay Zakah, he must do so. Otherwise Allah mentions of a severe torment on the Day of Judgment for those who are neglectful of their Zakah. Allah says in Surah Tawba,

“And those who hoard up gold and silver (Al-Kanz: the money, the Zakaah of which has not been paid) and spend them not in the way of Allaah, announce unto them a painful torment.

One should seek knowledge of the rulings related to Zakah and the categories of people entitled to receive Zakah. This will enable him to pay his Zakah in the correct way and the rightful people will receive Zakah. When someone asks you for Zakah, you should verify his story before giving it to him in order to protect your Zakah from fraudulent people.

Besides the obligatory Zakah, Allah has also enjoined Zakat-al-Fitr on the Muslims on the night of Eid.  It is purification for their fasts and a means to feed the poor so that no home remains without food on the day of Eid.

In order to encourage the Muslims to feed the poor and establish brotherhood, Allah has kept a beautiful reward for those who give iftaar to a fasting person.

Prophet (pbuh) said: “Whoever gives iftaar to one who is fasting will have a reward like his, without that detracting from the reward of the fasting person in the slightest.”  [Tirmidhi, Ibn Majah]

You can send Iftar to your neighbors, community mosques and way-farers who may be fasting.

Many of the salaf used to give up their iftaar for others, such as ‘Abd-Allaah ibn Umar (RA), Dawood al-Taa’i, Maalik ibn Dinar and Ahmad ibn Hanbal. Ibn ‘Umar used to break his fast only with the orphans, the poor and the needy. Al Hasan and Ibn Mubarak used to offer food to their brothers while fasting, and they would sit and serve them.

Fidyah (Expiation for inability to fast)

If you are unable to fast due to old age or a chronic illness, then you should feed a needy person for every fast that you miss. As Allah commands in the Qur’an,

This expiation for missed fasts is a reflection of the beauty of Islam. Contrary to the claims of critics, Islam is not posing a difficulty to the sick. Rather, in most of the expiations offered for issues like fasting, breaking an oath, Allah orders to feed the Masakeen (needy). All the rulings and regulations of Islam are for the benefit of an individual’s spiritual, physical and mental health as well as for the benefit of the entire society.

Allah promises peace and serenity for one who spends in the cause of Allah. Charity is like a goodly loan that Allah multiplies and one sees the reward on the Day of Judgment. Allah says in His Holy Book,

261. “The likeness of those who spend their wealth in the way of Allaah, is as the likeness of a grain (of corn); it grows seven ears, and each ear has a hundred grains. Allaah gives manifold increase to whom He wills. And Allaah is All-Sufficient for His creatures’ needs, All-Knower.

Fix an amount to give daily as sadaqah during Ramadan. Let your children hand the money to the poor. This will instill the habit of giving charity and will fill them with compassion for the needy.

Community efforts to feed the poor

There are various charity organizations that organize food distribution campaigns in Ramadan. Become a part of such campaigns as a volunteer or donor in order to distribute food to the widows, orphans, disabled, and poor. If there is no such effort being made in your community, give it a stand and organize such a campaign. You will receive the prayers of all the people who will benefit through the campaign.

You may also like: The True Essence of Fasting

Do something that will reap long term benefits for the community, as a means of ongoing charity for yourself or your parents.

Prophet (pbuh) said, “When a man dies, his acts come to an end, but three, recurring charity or knowledge (by which people) benefit, or a pious son, who prays for him (for the deceased).” [Sahih Muslim]

Some ways to do Sadqa-e-jariyah include installing a source of water in a community (such as a cooler or a well), planting a tree, building a mosque, writing and distribution of beneficial books, establishing an orphanage, a community clinic or a school, sponsoring an orphan and many more.

These were a few ways in which you can make charity and benefit yourself and the poor during Ramadan. Try to do as many as you can. Remember that whenever you give charity in the way of Allah, angels pray for you and it is a goodly loan that will be compensated in the Hereafter. For those who withhold charity out of love for wealth, angels pray for his destruction.

Share with us your suggestions on other beneficial ways to do charity during Ramadan.

Who is An Awwab and How To Be One?
7 Sunnahs to Try Out in Ramadan
What You Can Learn From Surah Yaseen