The First Revelation and its Glory 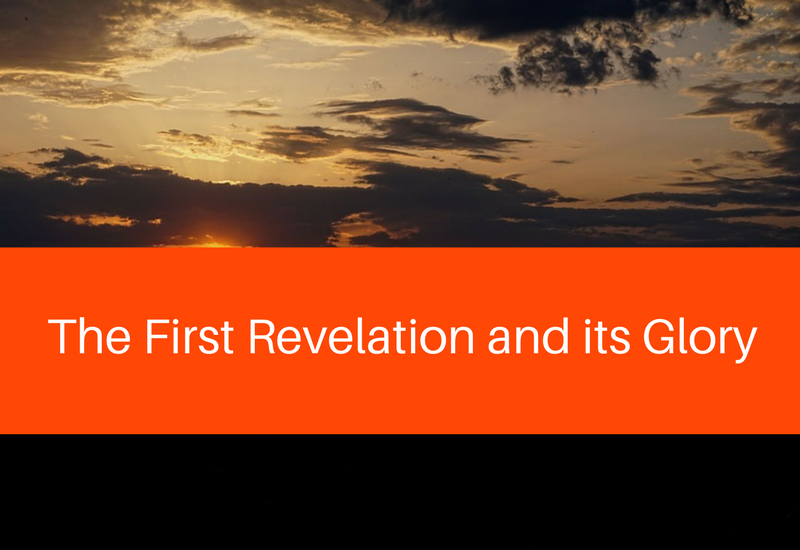 The faltering footsteps and his vulnerable breath echoed through the barren ravines of Mecca. He was terrified and unsure of what had just transpired before him. As Muhammad ﷺ descended from cave Hira on the peak on Jabl al Nur, he was no longer the man who had climbed it up. The solitude that he had sought conferred upon him a calling so profound, that he ran back to find solace in his wife Khadija (radiallah anha). This was a defining moment in the history of mankind. The ascension of Angel Gabriel on the night of Laylatul Qadr was a turning point in the manner the world was now supposed to function.

The account of the first Revelation that Rasulullah ﷺ received in Ghar (Cave) e Hira was narrated as follows:

The occasion of the first revelation is also illustrated through the tradition from Tabarsi in Majma’-al-Bayan, and he cites that the Messenger of Allah told Khadijah that whenever he was alone, he heard a voice. According to Tabarsi, Khadijah (radiallah anha) told Muhammad ﷺ: “Allah will not bring anything on you but goodness because you are trustworthy and pay the deposits, you observe bonds of relationship, and you are truthful in speech.”

Khadijah said this statement and then went to see Waraqah-ibn Nuﬁ (he was Khadijah’s cousin and was of the knowledgeable Arabs). She described to him what had happened to Muhammad ﷺ and added that he had heard the voice say: “O Muhammad say: ‘Bismillah-ir-Rahman-ir-Rahim, al-Hamd-u-lillah-i-Rabb-al-‘alamin (to the end of Surah Fatihah)’; and say: ‘La Ilaha Illallah’”.

Waraqah said: “Rejoice thou! Rejoice thou! According to what is mentioned in Taurat and Ingeel it is clear that he is the Messenger of Allah and he is the very one that Jesus Christ told about in his glad tidings. He has a religion like that of Moses; he is an apostle. He will be told to ﬁght in the Holy War soon after this, and if I am alive then, I will be with him in that Holy War.”

Although consisting of 19 verses, the first five verses of Surah Alaq, Chapter 96 of the Mushaf is considered to be the initially revealed verses of the Holy Quran. The next part of the chapter was revealed to the Prophet Muhammad ﷺ on a subsequent occasion when the messenger of Allah was threatened by one of the staunchest enemy of Islam Abu Jahl for praying at the Ka’bah as Allah had taught him.

Muhammad ﷺ was illiterate (ummi) and did not know how to read or write. The period of time when Islam was revealed through Quran, literacy existed only amongst the elite of the society. It was monopolised as the right of rich to obtain the virtue of reading and writing. The revelation of Quran upon the messenger came as a shock and despite of the declaration of Angle Gabriel to read (iqra), Rasullalah asserted his inability to do so. It is important to understand this context of revelation as it illustrates one of the terrible claims of the non- believers: Quran not being the word of Allah but the proclamation of the messenger himself. The first revelation of Quran is enigmatic in spiritual, metaphysical, and philosophical sense. It is marked with the signs of a change; so magnific and yet the message is simple, obvious and complete.

“Read (Proclaim)! In the Name of your Lord Who created”.

The pre-islamic Arabia is called the Youm e Jahiliya or the period of ignorance. This period stood witness to a number of crimes, immoral behaviour by men and women, negligible respect to the rights of child, woman and elderly, and exploitation of the weak. Islam came as a respite against such atrocities, corruption and desolation.

It is in this context quite simple and yet so enigmatic to note that Allah’s message began with ‘Iqra’, meaning to read. There exists a divine philosophy and solution to the problems of mankind in the first revealed verse of the Quran. Allah laid down before us through this verse an answer to even the worst problems of the mankind. Islam is the foremost religion to have encouraged reading, study and learning as much as they can. Islam lays great emphasis on the importance of Ilm and learning.

This first ayah also lays down great emphasis on interpreting and reading Quran under the guidance of Allah, the Magnanimous. Human being is fickle minded and often misguided to believe that he has the command over his destiny. The knowledge we gather and the academia we cherish is worthless without Allah guiding us on sirat ul mustaqeem. It is therefore incumbent for us to acknowledge the wisdom of Quranic instruction with a Bismisllah ir Rahman ir Rahim meaning “Starting with the Name of Allah, the Most Beneficent, the Most Merciful”, which is the declaration of dependence on One God Almighty for accomplishment of all matters of life.

“Created man out of a clot (of congealed blood)”

The second verse of the revealed verses of Surah Alaq centres on the smallest existence of life in the form of clot. Human life begins in the mother’s womb through a clot or alaqa. As the time passes, this clot transforms into a full grown fetus until it is ready to be born. Islam in the same manner begun with a message glittered by Allah through Angle Gabriel in the heart of Prophet Muhammad ﷺ; which transformed into a massive societal movement and became one of the fastest growing religions of the world. This verse illustrates the circle of life and is also one of the scientific miracles of Quran.

Allah also harkens upon the man to remember his humble beginnings. A man was nothing but a mere clot that would have not been able to celebrate the worldliness of his existence if it weren’t for the plans of Allah, the Lord of Mankind. Man walks about in this world in pride, considering his life to be his making, his success to be his puissance and his luxuries his treasure. Allah warns him and admonishes him against this nature for it shall bring a man nothing but Akhirah filled with trials.

“Read (Proclaim), and your Lord is the Most Generous,”

The next verse commands man to read in the name of Allah the most Generous (Akram, which is the superlative of the Arabic word Kareem). This verse envelopes one of the many wondrous attributes of Allah i.e. mercy and generosity. Allah is kind and giving. The verse is connected to both its preceding and the subsequent verse. While Allah reminds man to be cautious against his ignorance of the wrath of the Almighty and the truth of hereafter, he is thereafter attributed as the generous and therefore oft forgiving and merciful. Quran lays down great stress on repentance and introspection and therefore he who is ignorant is understood to be like a man who is engulfed in the darkness of his misgivings. This verse also connects up to the following verse that enunciates how Allah has given the mankind a great gift as he taught the creation by the pen.

“Who taught by the Pen,”

The concept of pen in Islam is highly relevant, both in its literal and metaphorical sense. Scholars agree pen to be of great significance and one of the first signs of Allah. It is the symbol of permanent revelation, Allah’s Qadr and his legislation. Ibn Qayyim Al-Jawziyah, an important medieval theologian, spiritual writer and an Islamic jurist; attributes the concept of pen in various formats. He calls Allah’s pen to be of his Qadr, pen for health and science, pen for refuting falsehood etc.

The Quran encompasses these attributes in various chapters such as Al- Qalam, Al- Imran, Al Ankabut. This chapter illustrates through this verse, Allah’s majestic mercy and bounty. This verse is connected to the next that explains how Quran is filled with Allah’s wisdom as it is the sacred book that teaches man what he knew not.

“Taught man that which he knew not”

The last verse of this revelation is in fact an answer to the very inhibition of Prophet Muhammad ﷺ where he cries, ‘”I can’t read” to the command of Angle Gabriel. Allah says, “Taught man which he knew not”, thereby refuting the messenger’s continence of not knowing how to read or write. The Almighty teaches the man at every given moment. The mysticism of Quran is so elaborate that every single verse has its individual stature and a combined plurality as a whole chapter. Various researchers and seeker of the truth have accepted Quran’s glory and capitulated to its grand discourse.