Yajuj and Majuj (Gog and Magog) 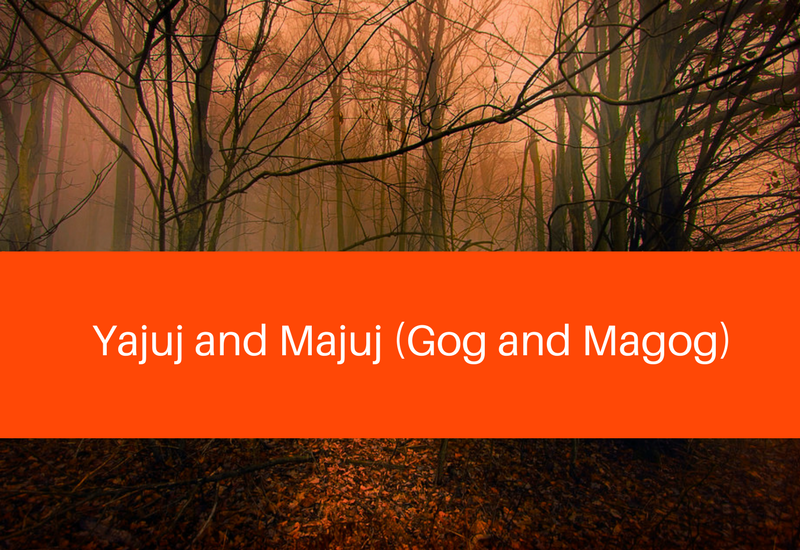 Who are Yajuj and Majuj?

Yajuj and Majuj are two tribes of people from the land of the Turks. They aren’t monsters or dinosaurs, but human beings, children of Adam (as). But unlike us (I hope), they are monstrous by nature. They like destroying stuff – crops, trees, buildings – and people. They can also drink up a lake.

And they are not from people of the future – they are alive and living on the earth right now. Why, then, can’t we see them? Why don’t they come to our cities and destroy everything? There won’t be any need for nuclear weapons, if you let Yajuj and Majuj loose on a people. Why are they a mystery?

The answer can be found in Surat al-Kahf.

In the surah, Allah narrates the story of a righteous king known as Dhul Qarnayn, who used to travel a lot. Once he came across a nation who could hardly communicate with him, but still they managed to make a complaint of theirs known to Dhul Qarnayn. They said that there were some people known as Yajuj and Majuj who kept causing destruction to their land, and asked Dhul Qarnayn for help.

“They said, ‘O Dhul-Qarnayn, indeed Gog and Magog are [great] corrupters in the land. So may we assign for you an expenditure that you might make between us and them a barrier?’” (18:94)

So Dhul Qarnayn made an incredibly strong barrier between two mountains which, to this day, has blocked the way for Yajuj and Majuj to come out.

And yet that barrier is going to be damaged, and soon.

How will they come out?

“One day the Messenger of Allah (s.a.) awoke from sleep with a flushed red face, and said: ‘La Ilahaillallah.’ He repeated it thrice. ‘Woe to the Arabs from the evil drawn near. Today a gap has been made in the wall of Ya’juj and Ma’juj like this.’ And he formed ten (with his fingers).’” (Tirmidhi 2187)

The Prophet (sa) told us how they will manage to break through.

You may also like: Surah Zalzalah – A Comprehensive Study

The coming out of Yajuj and Majuj is a major sign of the coming of the Hour. (Tirmidhi 2183)

After Isa (as) will kill the Dajjal (False Masiah), Allah will inform Isa (as) of the coming of Yajuj and Majuj and order him to seek refuge in a mountain along with the believers. As Yajuj and Majuj will swarm in the land and keep causing destruction down the mountain, the believers will find it harder and harder to find food and water to survive. (Riyad al-Salihin, b19 #1)

The Prophet (sa) told us how arrogant they will become at their success, “They shoot their arrows into the heavens so they returned dyed with blood, and they say – crudely and arrogantly – ‘We vanquished those in the earth, let us dominate the inhabitants of the heavens.’” (Tirmidhi 3153)

The Prophet (sa) is also reported to have said, “Yajuj and Majuj are sons of Adam. If they were allowed to come out, they would cause mischief and ruin people’s lives, and not one of them would die before leaving behind one thousand or more of his offspring.” (Tabaraani, qt in ‘Areefi 368)

Their Destruction and Ultimate Abode

Isa (as) will make dua to Allah to destroy them. Allah will send insects which will attach onto their necks, and they will all die. (Riyad al-Salihin, b19 #1)

Their ultimate abode is undoubtedly the Hellfire, given how they behaved on earth.

The Messenger of Allah (sa) said: “Allah, the High and Glorious, would say: O Adam I and he would say: At Thy service, at thy beck and call, O Lord, and the good is in Thy Hand. Allah would say: Bring forth the group of (the denizens of) Fire. He (Adam) would say: Who are the denizens of Hell? It would be said: They are out of every thousand nine hundred and ninety-nine…. It is at this juncture that every child would become white-haired and every pregnant woman would abort and you would see people in a state of intoxication, and they would not be in fact intoxicated but grievous will be the torment of Allah.”

The Companions became sad upon hearing this, and they asked the Prophet, “Messenger of Allah, who amongst us would be (that unfortunate) person (who would be doomed to Hell)?”

He said: “Good tidings for you, Yajuj Majuj would be those thousands (who would be the denizens of Hell) and a person (selected for Paradise) would be amongst you.” (Muslim 222)

Related Video: The Story of Gog and Magog

A Close Look at Surat al-Fatihah – Part 5
Who is An Awwab and How To Be One?
The Hidden Hikmah: How To Reap Benefits From Your Trials