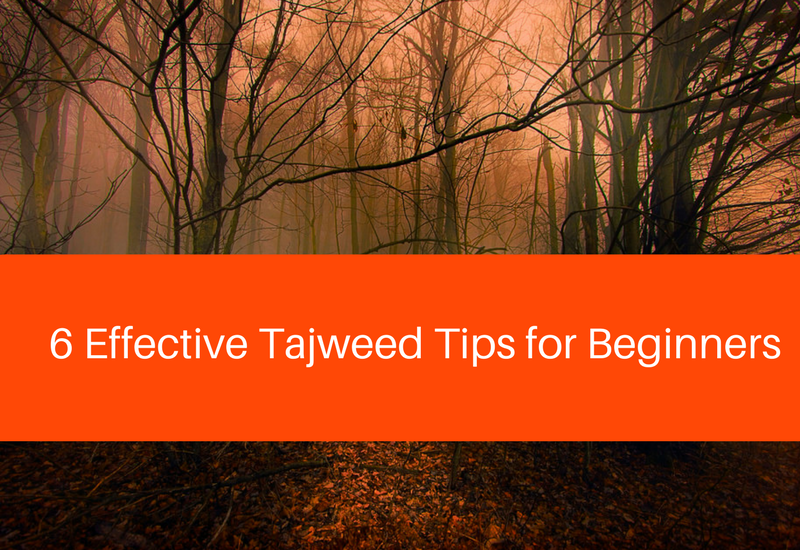 For most of us whose first language is not Arabic, but we desire to learn to read the Qur’an perfectly, the proper pronunciation of Arabic words is sometimes a struggle for us.

Tajweed is important to understanding the Qur’an. It helps us learn how Arabic words are used and pronounced such that we are able to recite the Qur’an perfectly.

While tajweed can be daunting for a beginner because you are learning a language with totally different rules from English, it doesn’t have to be so scary.

When I started learning tajweed fully less than a year ago, I didn’t expect to get a grasp of it so soon, and therefore I am sharing the tips that have helped me understand the rules of tajweed better.

Your intention really matters in anything you do as a Muslim, and even more so when you are trying to gain knowledge. Ask yourself why you want to learn tajweed, and I believe that the answer will be that so that you can become better at reciting the holy Qur’an.

When you are clear about your intention, then pray to the one that gave us the Qur’an to grant you the knowledge to understand His words. As a Muslim, I must say that this is the very first step that anyone learning tajweed should take, because if Allah (swt) does not grant you the understanding, who will?

It is said that before Imam Bukhari would compile a single hadith, he would offer a two rakah salah and seek the guidance of Allah (swt). So, you can understand the importance of putting Him first whenever we seek knowledge.

One of the things that have helped my study of tajweed has been the decision to learn directly from a Muslim scholar. Like reading the Qur’an, you need someone to teach you the rules of tajweed, how to pronounce words, identify places of articulation of letters, differentiate between different sounds, etc.

An instructor helps you assess your progress, find mistakes and teach you the technicalities of the Arabic language.

I understand that the lack of access to scholars usually prevents people from being able to learn from them directly, but rather than attempt to learn a foreign language on your own, enroll for a tajweed course online. It should be as good as having a teacher if you have picked an excellent course.

One Step at a Time

You think that there are many rules in the English language until you start to learn Arabic and find that even though the rules may be fewer, the phonology can be quite complex.

When I started learning tajweed, my instructor would have me recite the Arabic alphabets simply to test my knowledge of them, as well as proper pronunciation. I spent a couple of weeks just perfecting my pronunciation of alphabets like خ (kha), ح (ha), and ذ (dha).

And you know the beauty of learning the rules of tajweed one at a time? it makes the journey faster than if you tried to learn many things at once.

For example, after perfecting my pronunciation of these alphabets, it became easier for me to pronounce them correctly when I see them in the Qur’an. And it also made it easier for me to understand other aspects of tajweed like places of articulation and characteristics of the letters.

If you are tajweed beginner, don’t be shy to start learning the basics. It is the best way to quickly understand tajweed.

You may also like: Some duas from the Quran and Sunnah for Seeking Protection

When you are learning tajweed or Arabic, in isolation, you need an environment where the language is spoken, so that you can hear how native speakers pronounce these words.

As someone who doesn’t live in the Arab world, I’ve had to devise a means to hear Arabic speakers as often as possible. I do these by listening to native Arabic-speaking radio stations online.

You may not understand everything the native speaker says right now, but hearing the alphabets pronounced by an expert will help you perfect your pronunciation. Because hearing something pronounced teaches you better than just reading it by yourself.

Practice is what brings all your tajweed classes and radio listening to life. Practice is how you perfect your tajweed and your recitation of the Qur’an. After learning a concept in tajweed, make sure to incorporate it into your daily discourse.

When you say “JazakAllah Khayran”, try to pronounce the ‘kh’ as خ instead of ‘a’ or ‘k’ as an English speaker would say. When you learn something, use it in your daily speech, as often as possible so that you can get used to it.

This is a valuable tip that I picked up from my teachers and a native speaker of Arabic. For non-Arabs living outside of the Arab world, the Qur’an is your constant source of tajweed practice. It is where you find all the words that you are trying to master and the more you read the Qur’an, the better you get at pronouncing these words.

It is also advisable to get a mus’haf (hard copy of the Qur’an) that has tajweed indications. In this mus’haf, the tajweed rules in each verse of the Qur’an are colour-coded in different colours as a guide for people who are beginner learners of tajweed.

These helps you to be more aware of tajweed rules and to have a place to put them into practice after you have learned them.

Understanding tajweed to improve your Arabic and recitation of the Qur’an may look like a daunting task when you are a beginner, but you need to constantly remind yourself that not only will this earn you immense rewards, in sh’a Allah, but also that what seems daunting becomes easy when you are committed to taking the right steps in your quest for knowledge.

The Hidden Hikmah: How To Reap Benefits From Your Trials
How to Memorize Quran
10 Duas You Can Make During Ramadhan