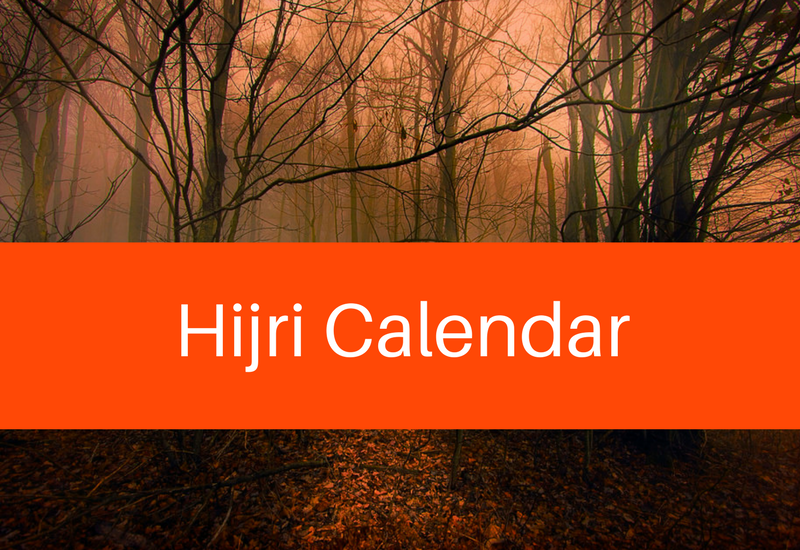 The Hijri calendar was started by Umar (ra) when he became the second Khalifah, to facilitate record-keeping and identifying a particular year in the past. Although the months themselves were named and existed before the Prophet (sa) (though their names might vary), the years were not counted per se. The formal calendar starts counting from the migration of the Prophet (sa) from Makkah to Madinah.

The names of the twelve months in chronological order:

These months are not just random creations of disbelievers. Allah (swt) says:

“Indeed, the number of months with Allah is twelve [lunar] months in the register of Allah [from] the day He created the heavens and the earth; of these, four are sacred….” (Quran 9:36)

As we saw in the above verse, four of the twelve months are designated as sacred, which means that fighting is not allowed in it.

“The year consists of twelve months of which four are inviolable; three of them consecutive – Dhul-Qa’dah, Dhul-Hijjah and Muharram and Rajab, the month of Mudar (tribe), which comes between Jumada and Sha’ban.” (Riyad al-Saihin b1 #213)

“The Arabs used to consider these months sacred during the time of Jahiliyyah, except for a group of them called Al-Basl, who held eight months of the year to be sacred as way of exaggeration in religion.” (Ibn Kathir 9.36)

Qatadah said about Allah’s statement, (so wrong not yourselves therein), “Injustice during the Sacred Months is worse and graver than injustice in other months. Verily, injustice is always wrong, but Allah makes things graver than others as He will.” He also said, “Allah has chosen some of His creation above others. He chose Messengers from angels and from men. He also chose His Speech above all speech, the Masajid above other areas of the earth, Ramadan and the Sacred Months above all months, Friday above the other days and Laylatul-Qadr (The Night of Decree) above all nights. Therefore, sanctify what Allah has sanctified, for doing so is the practice of people of understanding and comprehension.” (Ibn Kathir 9.36)

But why was is necessary to honour four of the twelve months of the year? The reason, as explained by ibn Kathir (rh), is the facilitation of Hajj and Umrah.

You may also like: 6 Effective Tajweed Tips for Beginners

“The four Sacred Months were made four, three in succession and one alone, so that the Hajj and `Umrah are performed with ease.” (Ibn Kathir 9.36)

From the Prophet’s (sa) Arafah Khutbah on the Farewell Hajj

What is more sacred than the sacred months? Take a look at how the Prophet (sa) explains to the Companions.

He said: “What month is this?”

The Companions said, “Allah and His Messenger (ﷺ) know better”.

Then the narrator says: “The Prophet (sa) remained silent for some time until we [the Companions] thought that he would give it a name other than its real name.”

Then the Prophet asked, “Is it not (the month of) Dhul-Hijjah?”

He then asked, “Which city is this?”.

“Allah and His Messenger know better.”

“Allah and His Messenger know better.”

“Is it not the day of An-Nahr (the sacrifice)?

After the companion’s affirmative answer, the Prophet said:

“Your blood, your property and your honour are inviolable to you all like the inviolability of this day of yours, in this city of yours and in this month of yours. You will soon meet your Rubb and He will ask you about your deeds. So do not turn to disbelief after me by striking the necks of one another. Behold! Let him who is present here convey (this message) to him who is absent; for many a person to whom a message is conveyed has more retentive memory than the one who hears it.”