Laylatul Qadr – A Night of Barakah 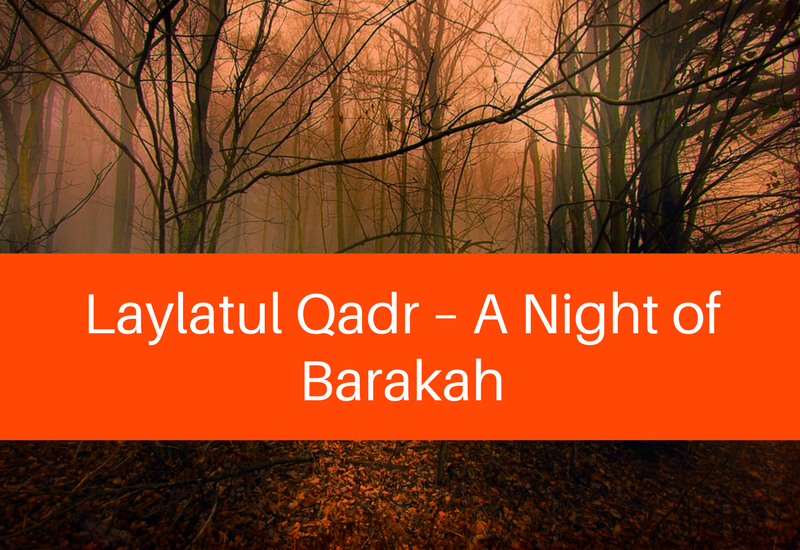 Imagine a time when your heart feels a divine peace; when every good action you perform, and every good word you speak, is filled with blessings; and, attracted by the shower of blessings, angels come down to the earth in droves, in anticipation of divine good.

The dictionary definition of barakah is ‘growth and increase’. (Lisan al-Arab)

Ar-Raghib says in his dictionary of the Quran, “When the divine blessing originates in a way that it can’t be felt (with the five senses), and in a form that can’t be counted nor calculated (materially); [in short] everything in which increment is witnessed without sensing its source, it is called mubarak, and there is barakah in it. And it is this increment that is indicated in the narration that wealth is not decreased by giving charity.” (Al-Mufradat fi Gharib al-Quran)

The definition of Ibn Abbas (ra) probably sums it up most succinctly. Whatever is good, on Laylatul Qadr you will see an increase in it. This increase is something that can’t be fully understood by us, because its source is divine, and its mysteries are beyond the reach of human intellect.

What does barakah mean to us in practical terms?

Think of rain. In the Quran, Allah (swt) calls rain ‘mubarak’. Why?

Think of the effect rain has on the earth. It is one of the most important ingredients that sustain life of any kind on earth. It moistens hard soil, erodes rocks into sediments, and makes the hard, tiny marble-like seeds grow into lush, soft, vividly coloured plants, trees and grass of all kinds. From there, the chain of sustenance continues and finally reaches us. All this is achieved by the simple yet incredible process of showering of water from the sky.

The Mubarak Night – What Makes it Mubarak

What concerns us is that the Quran makes this night special.

Also, our destinies for the coming year are told to the angels on this night.

Furthermore, Allah (swt) has dedicated a complete surah of the Quran to the subject of Laylatul Qadr:

The Prophet (sa) said, “Whosoever performs Qiyam during Lailat-ul-Qadr (Night of Decree), with faith and being hopeful of Allah’s reward, will have his former sins forgiven.” (Bukhari and Muslim, qt in Riyad al-Salihin 1189)

Ibn Kathir says in his commentary of this surah, “Worship during the Night of Al-Qadr is equivalent to worship performed for a period of one thousand months.”

Qatadah and Ibn Zayd both said concerning Allah’s statement, ‘There is peace’, that “This means all of it is good and there is no evil in it until the coming of Fajr (dawn).” (ibn Kathir)

Why is its exact date hidden?

If this night is so blessed, why didn’t Allah inform us exactly which night of Ramadan it falls on?

In fact, Allah had indeed informed the Prophet (sa) about its exact date. But then an interesting incident happened.

“Allah’s Messenger (sa) went out to inform the people about the (date of the) night of decree (Al-Qadr) but there happened a quarrel between two Muslim men.

“The Prophet (sa) said, ‘I came out to inform you about (the date of) the night of Al-Qadr, but as so and so and so and so quarreled, its knowledge was taken away (I forgot it), and maybe it was better for you….’” (Bukhari 49)

Imam Islahi makes an interesting comment on this issue:

“Apparently the divine wisdom behind not specifying it is that people should continue to seek it, and in this manner their fondness and desire to find it is tested. It is in this fondness and desire on the part of the people that all the blessings of this night are concealed.” (Islahi 6)

Top 10 Tips for Practical Quran Memorization
[Surah Maryam – 4] Duas – Turning the impossible into possible!
Hadith #12: Leave That Which Does Not Concern You....