“LAYLATUL QADR” – POWER UP FOR THE NIGHT OF POWER 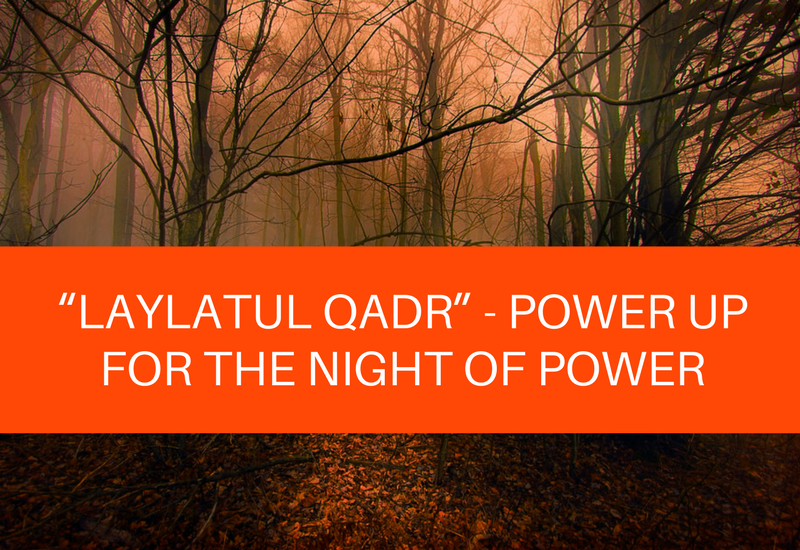 In our short lifespan of 60-70 years, we could have only wished to compete in the worship of Allah (swt) with our preceding Ummahs having a lifespan of 100’s of years. But Allah (swt) from His Everlasting mercy bestowed us with “Laylatul Qadr” (The night of power). A night that is greater than a thousand months. Allah (swt) says in the Qur’an:

So, after puberty, a person with an average lifespan may witness the night of Qadr upto 50 times. If he sincerely seeks the night of Qadr and spends it in the worship of Allah (swt), it would be recorded around 4000 years (50 x 83) of worship for him.

This great opportunity is coming our way. Have you tightened up your belts in preparation for it as our dear Prophet (pbuh) would do? Prophet Mohammed (pbuh) strove hard in worship during the last ten days of Ramadan as he never did at any other time. Because among the virtues of Laylatul Qadr is that it is an opportunity to get our past sins forgiven.

Prophet (pbuh) said:  “Whoever stays up and prays on Laylat al-Qadr out of faith and in the hope of reward, his previous sins will be forgiven.” [Bukhari & Muslim]

Let’s jot down a few do’s and don’ts to gain maximum benefits from this blessed night.

I’tikaaf is to stay at the mosque worshipping Allah (swt) while keeping away from people and worldly activities. It helps a person to detach his heart from the love of things and redirect it to loving Allah (swt). It is the sunnah of Prophet (pbuh) to observe I’tikaaf during the last ten days of Ramadan. I’tikaaf is to be observed in the mosque (for both males and females) and cannot be done at home. Whereas the number of days can be ten or less, as much as one is capable of performing.

Related: Tahajjud: When The Lord Descends To Hear His Slave

Won’t you wish to be counted among those who made Zikr of Allah for 83 years? Make lots of zikr and istighfar. Keep your tongue moist with the remembrance of Allah as Allah (swt) says in the Qur’an:

“O you who have believed, remember Allah with much remembrance.” [Qur’an Ch33: v41]

Make a list of the dua’s that you wish to make, the people you wish to remember in your duas. Refer to your Hisnul Muslim for the authentic beautiful duas regularly made by the Prophet (pbuh), asking for the goodness of this world and Hereafter. However, the best dua to be made on Laylatul Qadr is the one taught by Prophet (pbuh) to Aa’ishah (RA).

‘Aa’ishah said: “I said, ‘O Messenger of Allaah, if I know which night is Laylat al-Qadr, what should I say on that night?’ He said, ‘Say: Allaahumma innaka ‘afuwwun tuhibb al-‘afwa fa’affu ‘anni (O Allaah, You are forgiving and You love forgiveness, so forgive me).” [At-Tirmidhi]

Give Sadaqah and do charitable acts

Ascertain a certain amount to be given on every odd night. Give sadaqah-e-jariyah on behalf of your lost loved ones. Feed the poor, forgive the debts, overlook the faults and forgive one another. If you hurt someone, especially your parents, ask their forgiveness. If you have been on bad terms with someone, call them and make it up. Let go family feuds and strengthen family ties. Allah (swt) has united the hearts of the believers and loves the one who takes the first step in reconciling and the one who maintains family ties.

Educate your family about the virtues of Laylatul Qadr. Wake up your family and encourage them to do ibadah as the Prophet (pbuh) used to wake up his family.

Do Ibadah, even if you are menstruating

A menstruating woman is not allowed to pray, fast, do i’tikaf and tawaf. However she can recite Qur’an (without touching the mushaf with bare hands). She can make lots of zikr, istighfar and dua. So do not make your menses an excuse to miss out on the great blessings of this Blessed Night.

Do not seek it only on the 27th night

Prophet (pbuh), the Sahaba, Tabieen and Salaf as Saliheen (may Allah be pleased with them all) sought Laylatul Qadr on the odd nights during the last 10 days of Ramadan. Singling out the 27th night to be celebrated as Laylatul Qadr might cause you to miss this great night. It will also deprive you of a great deal of worship that you can perform seeking the Night of Power on the 5 odd nights, 21st, 23rd, 25th, 27th and 29th of Ramadan.

Do not accept any iftar parties, shopping invitations or outings. Take a break from worldly duties to devote as much time as possible to the worship of Allah (swt). Women give a break to their iftar delicacies and men sideline their job, business and trade.

“Aa’ishah (RA) said that when the last ten days of Ramadan came, the Prophet (pbuh) would stay up at night and would wake his family up, and would abstain from marital relations.” [Bukhari & Muslim]

Often we lose track of time when we sit to talk or browse our phone. Get rid of all applications on the phone that consume your time, whether games, social networking sites or messengers. Isolate yourself from chit-chat gatherings at home, outside mosques or on streets. You would not want to waste 83 years of your life over a game or vain talks.

Don’t be of the unfortunate

Time is money and we are always in short of time. This night of power equal to a 1000 months is a treasure. And none fails to accumulate its fortune except the most unfortunate ones. As Prophet (pbuh) said:

“A month has verily dawned over you wherein lies a night (i.e. Laylatul Qadr) which is better than a thousand months. Whoever misses such a night has indeed been deprived of all that is good; and none is deprived of it, except he who is really unfortunate.” [Ibn Majah]

May Allah grant us Laylatul Qadr and make us of those who celebrate it in its true essence and not become of the unfortunate ones.

[Surah Maryam - 1] Are You a Recipient of Allah’s Mercy?
Benefits of Reciting Ayat al-Kursi
The Power of Forgiveness in Islam