Duas Made by Musa (as) 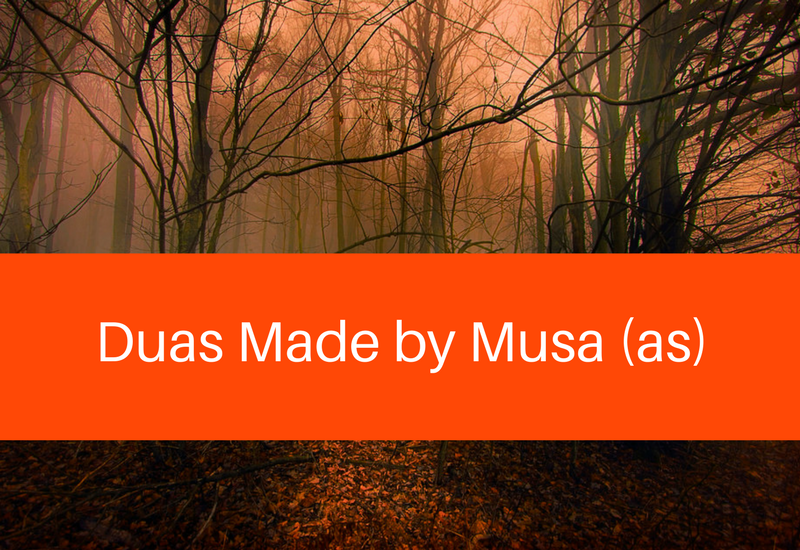 When He Wanted to See Allah

One day, when Musa (as) went to meet with Allah, he asked Allah to show Himself to him. Allah (Swt) records this miraculous incident in the Quran:

“And when Moses arrived at Our appointed time and his Lord spoke to him, he said, ‘My Lord, show me [Yourself] that I may look at You.’ [Allah] said, “You will not see Me, but look at the mountain; if it should remain in place, then you will see Me.’ But when his Lord appeared to the mountain, He rendered it level, and Moses fell unconscious.” (Quran, 7:142-143)

After Musa (as) woke up from his unconsciousness, he made the following dua:

When He Found out About the Golden Calf

Once while Musa (as) was away meeting Allah, the Children of Israel, under the incitement of a man named Samiri, decided to make a calf out of gold and worship it as their god. Allah says:

“And the people of Moses made, after [his departure], from their ornaments a calf – an image having a lowing sound. Did they not see that it could neither speak to them nor guide them to a way? They took it [for worship], and they were wrongdoers.“ (7:148)

Naturally, when Musa (as) came back and heard about this grievous sin of his people, he became very angry and sad. He became especially angry at his brother, whom he had left in charge, though the latter was blameless.

“And when Moses returned to his people, angry and grieved, he said, ‘How wretched is that by which you have replaced me after [my departure]. Were you impatient over the matter of your Lord?’ And he threw down the tablets and seized his brother by [the hair of] his head, pulling him toward him. [Aaron] said, ‘O son of my mother, indeed the people oppressed me and were about to kill me, so let not the enemies rejoice over me and do not place me among the wrongdoing people.’” (7:150)

Musa (as) then made this dua:

“[Moses] said, ‘My Lord, forgive me and my brother and admit us into Your mercy, for You are the most merciful of the merciful.’” (Quran, 7:151)

When He Killed a Man by Mistake

Prophet Musa made this very simple dua from the heart, which Allah (swt) accepted.

Allah accepted his dua, its evidence being the statement of Allah in the latter half of the same ayah:

“…and He forgave him. Indeed, He is the Forgiving, the Merciful.”

When He Received Orders to Go to Firawn

Musa (as), on his way from Madyan along with his family, sees a fire in the distance. He leaves his family there and goes to find out. What he finds has never been found by any other human being in this world. He hears a voice saying:

“O Moses, Indeed, I am your Lord, so remove your sandals. Indeed, you are in the sacred valley of Tuwa. And I have chosen you, so listen to what is revealed [to you]. Indeed, I am Allah. There is no deity except Me, so worship Me and establish prayer for My remembrance. Indeed, the Hour is coming – I almost conceal it – so that every soul may be recompensed according to that for which it strives. So do not let one avert you from it who does not believe in it and follows his desire, for you [then] would perish.”

After giving Musa (as) this reminder, Allah (swt) showed him a miracle, to further fortify his belief. He asked him, “What is that in your right hand, O Moses?” It was a staff. Allah told him to throw it down, and after he did so, it became a slithering and fearsome snake.

Allah (swt) said, “Seize it and fear not; We will return it to its former condition. And draw in your hand to your side; it will come out white without disease – another sign, That We may show you [some] of Our greater signs.”

Finally, after reminding and fortifying Musa (as) for the impending task, Allah gave the order:

“Go to Pharaoh. Indeed, he has transgressed.”

It was then that Musa (as) made the dua recited by scholars and speakers before giving a speech:

“My Lord, expand for me my breast [with assurance], ease for me my task, and untie the knot from my tongue that they may understand my speech.” (Quran, 20:25-28)

A Close Look at Surat al-Fatihah – Part 9
Why Do People Convert To Islam?
Lessons from the Lives of Prophets (Peace Be Upon Them) Part – III