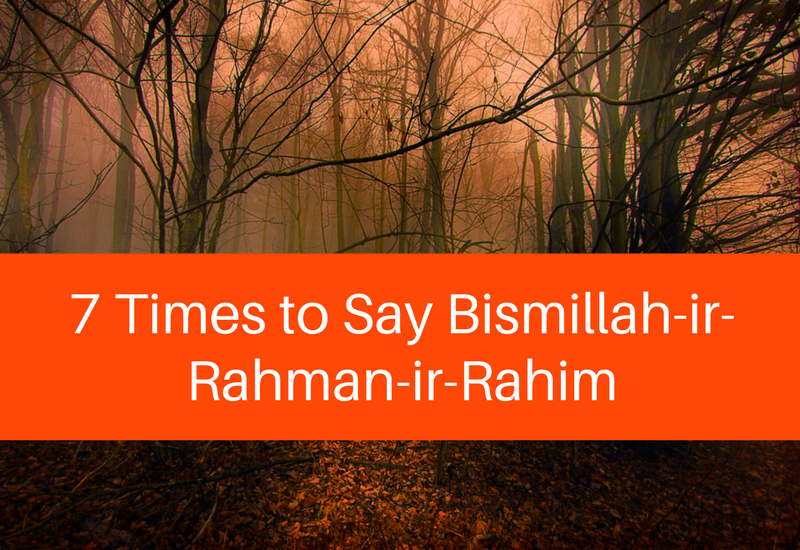 There are some things that feel natural to you as a Muslim and one of such is saying the basmallah – Bismillah-ir-Rahman-ir-Rahim (I begin in the name of Allah, the most beneficent, the merciful).

This phrase is at the start of everything we do as Muslims and the holy Prophet (saw) has encouraged us to recite the basmallah whenever we want to start anything, even as seemingly insignificant as putting on our shoes.

What is the Importance of Saying Bismillah?

When we say Bismillah-ir-Rahman-ir-Rahim, we are starting with the name of Allah (swt). We are recognising Him as our Lord and the reason we are taking that action.

We are seeking His protection and mercy. This is sometimes the reason why people would say that if you cannot say the bismillah before doing something, then it shows that the act is probably haram and you shouldn’t be doing it.

As I’ve said, saying Bismillah-ir-Rahman-ir-Rahim should be a normal part of every Muslim’s lifestyle, but there are even some times that have been evidently shown to us in the ahadith of Prophet Muhammad (saw)  as times to always say the basmallah.

1.  When Leaving the House

When you are about to leave the house what do you do? You put on some good-looking clothes, put on your shoes, carry everything you need, start your car or take your bus/train pass. Then you leave the house and lock the doors, securing your properties within the house.

Saying Bismillah-ir-Rahman-ir-Rahim is a way to secure yourself outside the house, just as you have secured your house by locking the door.

The Messenger of Allah (saw) said, “Whoever says (upon leaving his house): ‘Bismillah, tawakkaltu ‘alallah, wa la hawla wa la quwwata illa billah [I begin with the Name of Allah; I trust in Allah; there is no altering of conditions but by the Power of Allah],’ it will be said to him: ‘You are guided, defended and protected.’ The devil will go far away from him.” (Riyad as-Salihin)

2.  When Entering the Toilet

How many times have you stepped into the restroom mindlessly? I will admit that this is something I do often, and may even go as far as having a quick chat with someone in the restroom.

But the holy Prophet (saw) was quoted to have said that “The screen between the Jinn and the nakedness of the sons of Adam is that when a person enters the Kanif, he should say: Bismillah (in the name of Allah).’” (Sunan Ibn Majah)

Saying Bismillah serves as a form of protection for us from jinns whenever we enter the restroom. Although for this, a Muslim is advised to go further by reciting the full dua for entering the toilet:

“O Allah, I seek refuge with you from all evil and evil-doers.”

3. When Starting a Meal

Have you ever bought some fast food on a hungry day and dug in without mentioning the name of Allah? Every time you eat, no matter how much of a rush you are in, or even if it’s just a little piece of gum, you should begin by saying bismillah.

In a hadith narrated by Umar bin Abu Salamah, the Messenger of Allah (saw), said to him, “Mention Allah’s Name (i.e., say Bismillah before starting eating), eat with your right hand, and eat from what is near you.” (Riyad as-Salihin)

When you feel so ill that you do not even feel like yourself. No matter how severe the pain that you feel, saying Bismillah can bring you relief.

When Prophet Muhammad (saw) was afflicted with the evil eye, the first thing that angel Jibril said to him when recited ruqya for him was “bismillah”.

Abu ‘Abdullah bin Abul-‘as reported: I complained to the Messenger of Allah (saw) about a pain I had in my body. The Messenger of Allah (saw) said, “Place your hand where you feel pain and say: ‘Bismillah (With the Name of Allah)’ three times; and then repeat seven times: ‘A’udhu bi’izzatillahi wa qudratihi min sharri ma ajidu wa ‘uhadhiru (I seek refuge with Allah and with His Power from the evil that afflicts me and that which I apprehend).”” (Riyad as-Salihin)

At the height of a passionate sexual encounter between a married couple, the least thing that you would expect to worry about is saying Bismillah.

But like I said earlier, as Muslims, we are literally advised to begin absolutely everything we do with the name of Allah (swt), and that includes sexual relations with one’s spouse.

Like leaving your house, the instance of basmallah here also serves the purpose of protection, but in this case for the potential child that may be conceived in that encounter.

“If anyone of you, when having sexual intercourse with his wife, says: Bismillah, Allahumma jannibni-Sh-Shaitan wa jannib-ish-Shaitan ma razaqtana, and if it is destined that they should have a child, then Satan will never be able to harm him.” (Bukhari)

6. When Placing the Deceased in the Grave

Whenever anyone passed away amongst the companions of the Prophet (saw) and they were being lowered into the grave, the holy Prophet (saw) would say “Bismillah, wa ‘ala millati rasul-illah (In the Name of Allah and according to the religion of the Messenger of Allah).’” (Sunan Ibn Majah)

7.  When Slaughtering an Animal

Part of the reasons why have the debate of whether a food (especially meat) is halal to eat when we visit any restaurant, is because of the way the animal may have been slaughtered.

Was it killed according to the Shariah-stipulated ways of killing animals? And equally important, did the slaughterer say ‘bismillah’ before slaughtering the animal?

Any time that the Prophet (saw) would slaughter an animal during Eid, he would say “Bismillah wa Allahu Akbar”, then proceed to slaughter the animal.

As Muslims, it is a part of our lifestyle to always begin our actions with the name of Allah (swt), not only for the protection that this phrase covers us with, but also because it helps us to affirm our belief in our creator.

After Reading Chapter 21 of the Quran, My Life Changed… For The Most Unexpected Reason
Who Wrote The Quran?
4 Tips for Achieving Barakah in Your Day