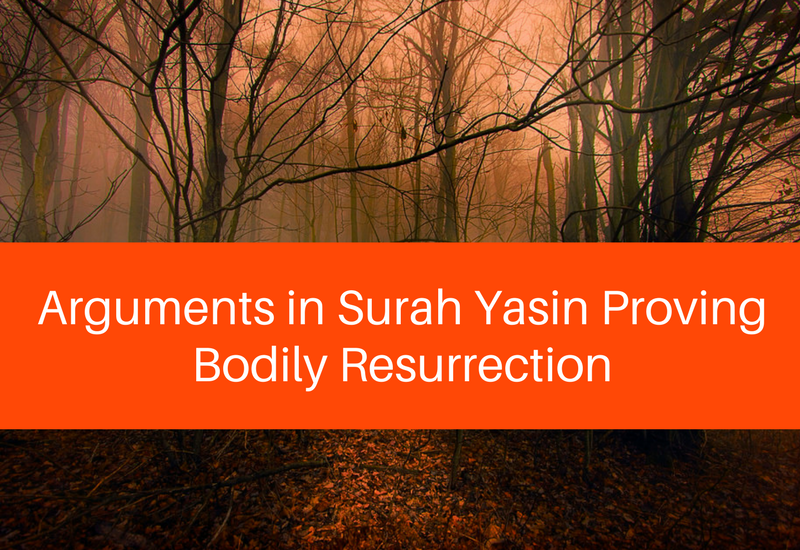 One of the most emphasised complaints of the disbelievers of Qurayish against belief in Allah and the Prophet (sa) was the reality of the Day of Judgment. What! We will come back from dead? After our bones have become dust? How is that possible?

How can you make bones out of dust? And how can you even tell which dust particles belong to my bones and which to the next person’s?

And these questions aren’t redundant in this day and age. It is still asked by people, among them the atheists and agnostics. Some Christians also believe that the body won’t be resurrected but only the soul.

Let us now look at how the Quran answers these questions by presenting solid arguments on behalf of the reality of resurrection of human beings on the Day of Judgment.

“Does man not consider that We created him from a [mere] sperm-drop – then at once he is a clear adversary? And he presents for Us an example and forgets his [own] creation. He says, ‘Who will give life to bones while they are disintegrated?’ Say, ‘He will give them life who produced them the first time; and He is, of all creation, Knowing.’” (36:77-79)

The word ‘man’ (insan) here applies to all those human beings who deny the reality of resurrection. (Ibn Kathir 36:77)

Those who deny the reality of resurrection have actually forgotten to consider their own creation in the first place.

“If creating them the first time was not of a bother to Him, how can it be bothersome for Him to re-create them?… The words ‘wa nasiya khalqah (‘and forgets his [own] creation)’ imply that such a stupid question can only be asked by someone who has forgotten his own process of creation. He who remembers that God created him from clay will never ask such a question. If he does pose this question, then it means that he has become God’s rival who is ready to fight with Him.” (Islahi 47)

If you are convinced that there is a Creator, then how can it be so difficult to believe in recreation? Even a child playing with bricks finds it easier to remake it after his first successful attempt.

As to identifying which particles belong to which bones, “He knows about the bones in all areas and regions of the earth, where they have gone when they disintegrated and dispersed.” (Ibn Kathir 36:77)

You may also like: Hijri Calendar & Duas from the Quran

“The implication is that they should not regard it improbable that life will emerge from ashes and clay. They often see the creation of elements from opposing elements. By striking two branches of a lush green tree they create fire. How can it be improbable for the God Who has shown this majesty to make life appear from ashes and clay.” (Islahi 47)

In basic chemistry we learn that oxygen, an atmospheric gas that causes, among other things, fire to burn. And yet, that same element, when combined with hydrogen (another highly combustible gas), forms water, which extinguishes fire.

“The One Who initiated the creation of this tree from water, when it has become green and beautiful, bearing fruit, then He changes it until it becomes dry wood with which fires are lit. For He does whatever He wills and He is able to do whatever He wills, and none can stop Him.” (Ibn Kathir 36:77)

Now that you’ve looked at yourself and things on the earth, look at the sky. Look at the mountains and the oceans. Look at the stars and planets, these mammoth, majestic creations of Allah. And now ask yourself, why should it be difficult for the One who created all this to recreate us from dust?

This verse refutes the notion of improbability of re-creation of man in another way: How can the God Who created these heavens and the earth without any difficulty not be able to create people like them? They should think which is the more difficult of the two tasks.” (Islahi 48)

“Then inquire of them, [O Muhammad], ‘Are they a stronger [or more difficult] creation or those [others] We have created?’ Indeed, We created men from sticky clay.” (37:11)

“It is emphatically said that God is the supreme creator; no one should be misled to believe that He got tired after creating this world or His power of creativity has finished; on the contrary, He is fresh as before and is fully aware of the ingredients of all His creatures; whenever He wants He will bring each and every part together to re-create them.” (Islahi 48)

The final argument presented is the conclusive one – that Allah doesn’t even need to gather the dust particles and then make your shape out of it. All He has to say is “Be”.

“The implication of this verse is that no one should remain in the misconception that to create some thing God needs factories, investment raw material or machines. God does not need anything to implement His intentions.” (Islahi 48)

Then Allah (swt) ends the surah by saying:

Ramadan Special: A Dua About the Quran
Some Duas from the Quran and Sunnah for Seeking Protection
5 Beneficial Reasons to Teach What You Have Learnt from the Quran

One response to “Arguments in Surah Yasin Proving Bodily Resurrection”