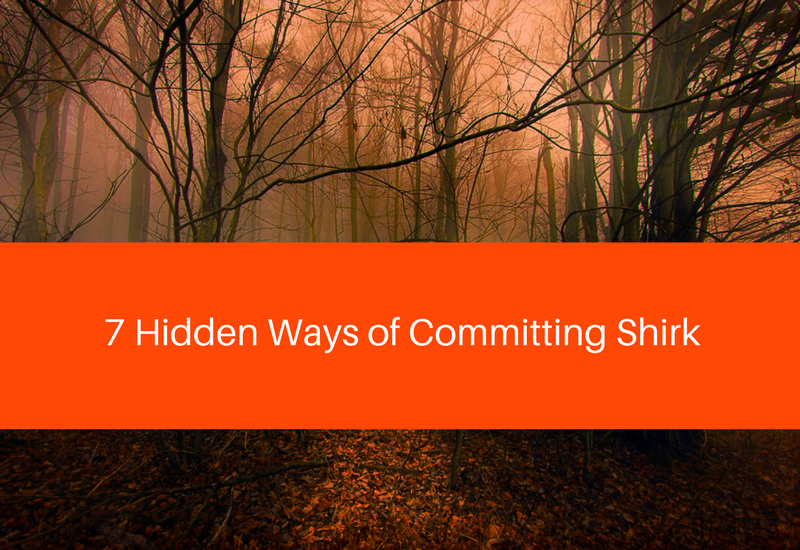 When you hear the word ‘shirk’, what comes into mind?

And if someone were to ask you as a practising Muslim if you are guilty of this very grave sin, my guess is that you will wholeheartedly say no.

But are we free from shirk? Are we sure that in our day to day lives, we do not do things that are considered as shirk? Scholars have categorized shirk into major, minor and hidden shirk. The form that is most known to us is the major shirk which is openly associating partners with Allah (ta’ala).

So, I want us to examine things in our lives that could fall under the other types of shirk.

I know that not everyone does these things to show off. But the point is that a large number of people are growing accustomed to showing off themselves for the validation of other people and to be seen in a good light by others.

Of all the ways by which we show off, showing off our good deeds is an act of shirk. Prophet Muhammad (saw) said: “The thing I fear most for you is the lesser shirk (polytheism), showing-off (of good deeds).” (Bulugh al-Maram)

Maybe you donated money to charity and tweeted the link, or you uploaded a video of you reciting the Qur’an. These actions could be deemed as show-off depending on your intentions. If your intention was to encourage others to do these good deeds too, then it is not considered as a show-off.

But if your intention was for people to know you give to charity or that you have proper tajweed, then that is showing off.

This means that we should be careful about the things that we expose about ourselves to other people and we should always check our intentions to be sure that we are not committing shirk.

It is said that the difference between a believer and a non-believer lies in prostration. When we abandon our salah, we are committing an act of shirk. In a hadith narrated by Anas bin Malik, Prophet Muhammad (saw) said that “There is nothing standing between a person and Shirk (polytheism) except leaving the prayer, so if he leaves it he has committed Shirk.” (Sunan Ibn Majah)

If missing our salah is an act of shirk, then we need to be more mindful of how we spend our days, so that we are not part of those who think that they are worshipping Allah (ta’ala), but who is committing shirk without knowing.

3. Swearing by Any Other Than Allah (ta’ala)

Ibn ‘Umar (May Allah be pleased with him) said:

I heard a man saying: “No, by the Ka’bah.” I admonished him: “Do not swear by anything besides Allah, for I heard the Messenger of Allah (ﷺ) saying, ‘He who swears by anyone or anything other than Allah, has indeed committed an act of Kufr or Shirk’.” (Riyad as-Saliheen)

There is a popular trend among young adults that I have witnessed, and that is swearing by anything asides from Allah (ta’ala).

Islam takes the issue of swearing very seriously. We are not permitted to swear on our mothers’ lives or swear by anything that has been created by Allah (ta’ala) as already depicted from the hadith above. If anyone feels the need to swear, then let them swear by the name of Allah (ta’ala).

4. Loving Others More Than Allah (ta’ala)

If I asked you if you love anyone more than you love Allah (ta’ala), what would you say? Many people will say no. but most times, our actions say otherwise.

We say that we love Allah (ta’ala) and His Messenger more than anything in the world, but we are quick to disobey them. We love our spouses and children more than we love our creator, especially when we put these people above what Allah (ta’ala) has commanded.

So, it is time for salah but you chose to go out on a movie date with a friend, to come back to observe your salah later, if at all. Who have you shown is more important to you in that scenario?

‘Abdullah ibn Mas’ud reported that the Prophet, may Allah bless him and grant him peace, said, “Paying attention to the bad omen (tayyara) is association (shirk). It has nothing to do with us. Allah will remove it by reliance on Him.” (Al Adab al-Mufrad)

If you believe that someone has looked at you in a funny way and is the cause of something bad happening to you, or if you believe what popular astrology says about your birth month being the reason for you acting in certain ways, you have committed an act of disbelief in Allah (ta’ala).

6. Fearing Others More Than You Fear Allah (ta’ala)

There is no one that we should fear more than we fear our creator. So, when a Muslim shows that they fear another human, maybe due to the fact the person could harm them, it is an act of disbelief.

7. Seeking Help from Other Than Allah (ta’ala)

When we think that only certain people can help us, we are indirectly saying that there is someone capable of making things happen like Allah (ta’ala) can. This is putting someone on the same level as our Rabb, and that is a form of shirk.

This is not to say that we do not seek help from people, but that rather, we seek Allah (ta’ala)’s help before asking any of His creations.

These days, it is easy to fall into the act shirk. And therefore, as Muslims, we have a duty to seek beneficial knowledge from the right sources, purify our intention before any act, and ask Allah (ta’ala) to protect us from the sin of shirk.