Women Honored in the Holy Quran Part 7: Women and Their Rights in Islam 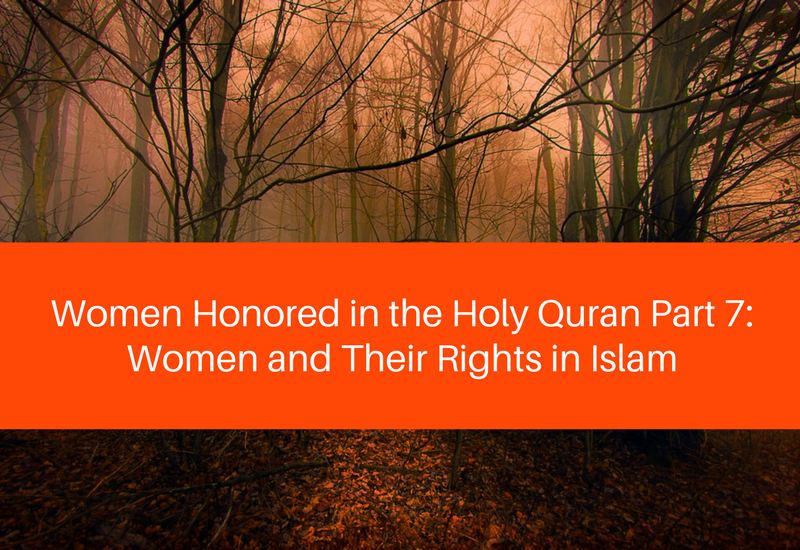 This final article of this series highlights the rights and roles of women in the Holy Quran.

Women’s right to be rewarded by God:

…Never will I waste the work of a worker among you, whether male or female…(3:195)

Whoso does that which is right, and believes, whether male or female, We will surely grant a happy life. And We will reward them according to the best of their actions. (16:97)

Women’s right to choose their husbands and to be treated with kindness by husbands:

O you who believe! You are forbidden to inherit women against their will. Nor should you treat them with harshness that you may take away part of the dower [money given by the husband to the wife for the marriage contract] you have given them, except where they have been guilty of open lewdness; on the contrary live with them on a footing of kindness and fairness. If you take a dislike to them it may be that you dislike a thing, and God brings about through it a great deal of good. (4:19)

And give the women (on marriage) their dower as a free gift; but if they, of their own good pleasure, remit any part of it to you, take it and enjoy it with right good cheer. (4:4)

But if you decide to take one wife in place of another, do not take back anything out of what you have given her, even though it may have been a heap of wealth. Will you take it back by slander and manifest sin? (4:20)

Women’s right to be financially provided for by husbands:

Men are the protectors and maintainers of women, Because Allah has given the one more (strength) than the other, and because they support them from their means….(4:34)

Those of you who die and leave widows should bequeath for their widows a year’s maintenance and residence. But if they (the widows) leave (the residence) there is no blame on you for what they justly do with themselves. (2:240)

Women’s right to just dealing by husbands who have more than one wife (Note that polygamy is allowed in the context of providing care for orphans left after war). Also the encouragement to marry only one wife to prevent injustice:

You will never be able to do perfect justice between wives even if it is your ardent desire, so do not incline too much to one of them (by giving her more of your time and provision) so as to leave the other hanging (i.e. neither divorced nor married). (4:129)

A woman’s right for a representative from her side during marital disputes:

If you fear a breach between them (ie. the man and his wife), appoint (two) arbiters, one from his family, and the other from hers; If they wish for peace (desire reconciliation), then God will cause their reconciliation (make them of one mind): for God has full knowledge, and is acquainted With all things. (4:35)

Women’s right to be treated justly during the divorce process:

And when you divorce women and they have reached (the end) of their waiting term, then either keep them honorably or set them free honorably, and do not hold them against their will in order to harm (them), and whoever does so wrongs his own soul… (2:231)

The right of women to pledge allegiance to a leader:

O Prophet! If believing women come to you and pledge themselves to serve no other deity besides God, to commit neither theft nor adultery, nor child-murder, to utter no monstrous falsehoods of their own invention, and not to disobey you in any just matter, then accept their allegiance, and pray for Allah’s forgiveness upon them. Surely Allah is Forgiving and Merciful. (60:12)

The right of women to participate in society (by protecting their fellow believers, encouraging the doing of good, praying and giving charity, etc.):

And [as for] the believers, both men and women – they are friends and protectors of one another: they [all] enjoin the doing of what is right and forbid the doing of what is wrong, and are constant in prayer, and render the poor-due, and pay heed unto God and His apostle. It is they upon whom God will bestow His grace: verily, God is Almighty, Wise.” (9:71)

Women’s right to be protected from false accusations:

Surely those who accuse chaste believing women, (who are) unaware, are cursed in this world and the hereafter, and they shall have a grievous chastisement. (24:23)

Those who accuse married women of adultery, then fail to produce four witnesses, you shall whip them eighty lashes, and do not accept any testimony from them; they are wicked. (24:4)

The evil of female infanticide, a practice that Islam ended in Arabia:

And when the news of (the birth of) a female (child) is brought to any of them, his face becomes dark, and he is filled with inward grief! He hides himself from the people because of the shame of that whereof he has been informed. Shall he keep her with dishonor or bury her in the earth? Certainly, evil is their decision! (16:58-59)

And when the female (infant) buried alive (as the pagan Arabs used to do) shall be questioned (on the Day of Judgment): For what sin she was killed? (81:8-9)

Hijri Calendar
Aisha Bint Abu Bakr: An Exemplary Believer
Hadith #6 : That Which Is Lawful Is Clear...

2 responses to “Women Honored in the Holy Quran Part 7: Women and Their Rights in Islam”