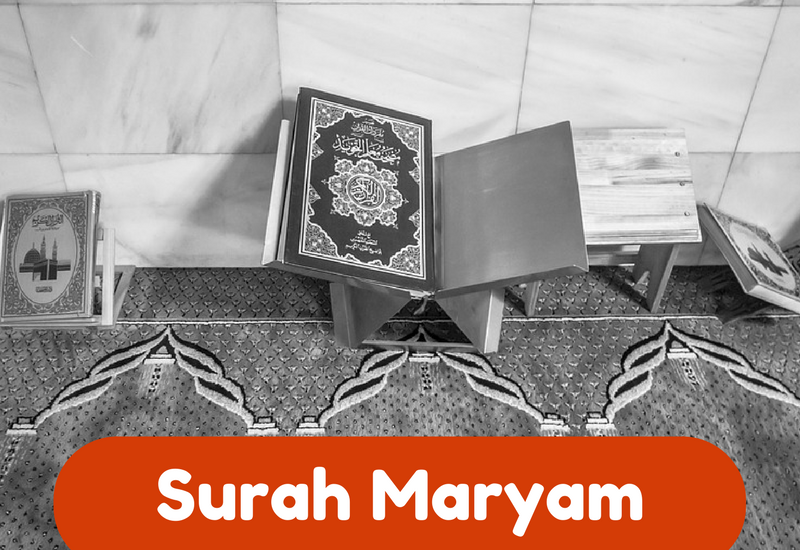 Surah Maryam is the nineteenth chapter of the Quran. Like every Surah of the Quran, it contains valuable gems and lessons. In this article we shall begin our venture into the verses of this Surah and explore the depths of Allah’s words, revealed from above seven heavens. Let’s begin the journey!

It is compulsory to recite Surah Fatiha in each Raka’ah of Salah (Hey! But weren’t we talking about Surah Maryam? Read on, I’m coming to point). The gist of Surah Fatiha is the Dua at its end which we ask Allah after having praised him. We ask Allah to guide us to the straight path; the path of those He has favored upon – the truly successful.

“Guide us to the straight path – The path of those upon whom You have bestowed favor.”(Surah Fatiha 1: 7)

As an answer to this supplication, Allah (swt) has given us the whole Quran. He has mentioned the stories of these favored people throughout the Quran, so we can take them as our guides and learn from their ways. Surah Maryam also contains stories of some of these special people. Allah (swt) says after relating about them, in verse 58, “Those were the ones upon whom Allah bestowed favor from among the prophets of the descendants of Adam and of those We carried [in the ship] with Noah, and of the descendants of Abraham and Israel, and of those whom We guided and chose.” (Surah Maryam)

One of our goals as we study Surah Maryam is to gain tips from the lives of these people on how they gained the pleasure of Allah. So look out for the mention of these champions and play close attention…these are the people we aspire to follow!

A beacon of hope

The verses of the Quran can be understood better if we know the context in which they were revealed. The scholars of Tafseer write that Surah Maryam was revealed before the migration of Muslims to Abyssinia, in around the fifth year of prophethood. Some verses of this chapter, pertaining the miraculous nature of the birth of Esa (alayhi salam) were recited by Ja’far bin Abi Talib (r.a) in front of the Abyssinian king, Najashi.

One can picture in mind the conditions during those difficult days that led the Muslims to migrate. After the call of Islam was made public, the disbelievers grew in their enmity and opposition day after day. When they could not stop the message verbally, they resorted to persecution. They started harassing the Muslims by all means and at all fronts.

The Muslims were estranged socially, they had to endure the psychological pain of cutting remarks and taunts of the pagans and they were going through physical pain and suffering. The weak ones and the slaves were tortured mercilessly by their masters and kinsmen. Yasir (ra) and Sumayyah (ra) were martyred, Bilal (ra) was dragged on hot sand and Khubaib (ra) was laid on hot coals. Even the nobles like Abu Bakr (ra) and Uthman (ra) were not spared. Such were the days when Surah Maryam was revealed…

But these verses came as comfort and strength. Surah Maryam contained verses about the reward for those who believed and gave them glad tidings. It related stories of the Prophets of the past who had faced similar conditions. The verses of Surah Maryam mention the Prophets Zakariyyah (as), Yahya (as) and Esa (as) who faced severe opposition from the Bani Israel. They mention the story of Ibrahim (as) who was forced to flee his hometown. These stories weren’t there for entertainment; they were revealed to strengthen the hearts of the Muslims. Allah (swt) says in the Quran, “And each [story] We relate to you from the news of the messengers is that by which We make firm your heart.” (Surah Hud 11: 120)

These verses also contained a warning for the disbelievers by telling them the fate of those who rejected the message.

Nonetheless, these verses weren’t just for the Sahaba, they are for us too. Muslims today are going through a similar time; war and persecution. Those who practice Islam are estranged in their lands. They have to endure the hatred, harassment and opposition from the non-believers as well as other Muslims. Today, again, these verses of Surah Maryam serve as a beacon of hope and strength; keep going and you shall be successful. Do not despair for this is the path of those who were favored upon by Allah. These difficulties are the milestones of Allah’s love and if you stay steadfast on the straight path, the end shall be yours. Your faith is the most valuable; do not leave it for anyone or anything.

An oft repeated notion in the Muslim community is to recite Surah Maryam during pregnancy to ease child birth. However, it should be noted that this is only a recommendation by some scholars. The Quran and hadith contain no evidence of this or any other supplication specific for this occasion. One may recite any of the supplications regarding righteous children in the Quran or general supplications for ease in all matters, e.g.

“O Allah, there is no ease except in that which You have made easy, and You make the difficulty, if You wish, easy.”

We must remember that the Quran indeed is a miracle and a source of Shifa, however, the actual purpose of it was to seek the guidance within and not just to use its verses as incantations. The Barakah in life does not come from merely reciting the verses; it comes from acting upon and applying the verses of Quran. Moreover, parents will find some excellent parenting lessons in Surah Maryam which they can implement.

We will, Insha Allah, begin to explore the verses of the Surah from the next article in this series. Stay tuned!

The Prophetic Way of Dealing With Enmity
Protective Duas from the Quran and Hadith
Who Wrote The Quran?