Some Quotes from Islamic History 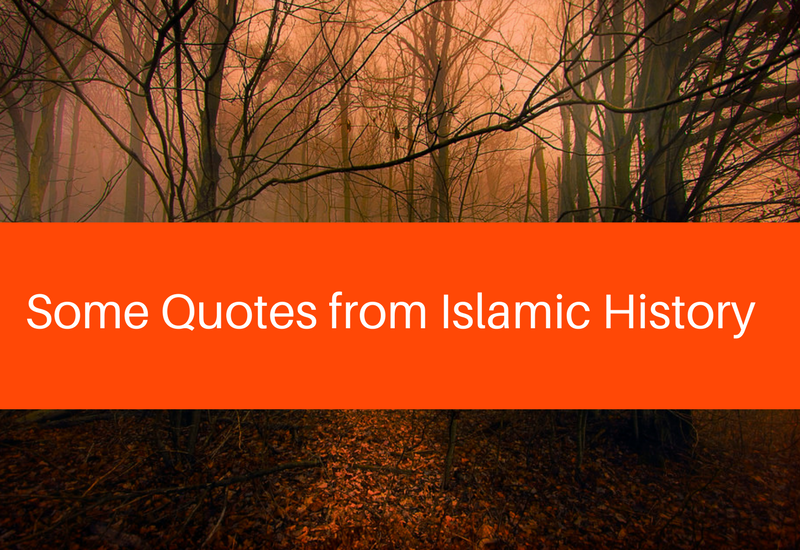 When we were at school, we were taught the history of the different ages of the Mughal Empire, Captain Cook, Columbus and so on. But most children, even in Islamic countries, are taught little, if anything, of the history of the great men and women in Islam. From the time of Adam (as) to the fall of the Islamic Empire and beyond, Allah (swt) has sent in this world exceptional Muslims who changed the course of history with their various contributions to the world.

Here are a few quotes from such exceptional people.

He was the first child to accept Islam in the hands of the Prophet (sa), and he became the fourth Caliph of Islam.

“Whoever has the following four qualities has the good of this world and the next and is completely successful:

He was a much-valued Companion of the Prophet (sa) and later became the judge of Damascus.

“Son of Adam, stamp the earth with your feet for soon, it will be your grave. Son of Adam, you are only (a collection of) days, whenever the day passes, a part of you is gone. Son of Adam, your lifetime has never ceased to be depleted since the day your mother gave birth to you.” (Abu ‘Aziz 186)

“Worship Allah as if you are seeing Him, count yourself on death row, fear the dua of the oppressed and you know that the little that suffices you is far better than the plenty that makes you heedless. You should know that acts of righteousness shall not be in vain and sins shall not be forgotten.” (Abu ‘Aziz 186)

“I met people (who were like) leaves without thorns but now, there are thorns without leaves. If you criticize them, they criticize you. If you let them be, they won’t let you be.” The people asked, “What do we do?” (He replied,) “Loan them part of you honour (in expectation of) a day when you will be needy (of reward).” (Abu ‘Aziz 187)

He was one of the early Muslims and one of the greatest scholars among the Sahaba.

Ibn Mubarak said: “I saw that sins cause hearts to die, that base actions lead to their addiction, that avoiding sins is life for the heart, and that it is better for your soul for you to disobey it.” (Gems and Jewels 68)

Hassan said: “I have met (pious) people who are more miserly with their time than they are with their wealth.” (Gems and Jewels 22)

Abu Qulamah Al-Jirmi was an eminent Tabi’i and a distinguished Imam and jurist. He once said in a sermon: “If you hear something that you do not like about your brother, then try your best to seek out an excuse for him. And if you do not find any excuse for him, then say: perhaps my brother has an excuse that I do not know about.” (Gems and Jewels 54)

He is a descendent of Umar ibn al-Khattab (ra) and is considered by some as the Fifth Rightly-Guided Caliphs of Islam. After he became Caliph, he said to the people:

“Many a Caliph passed before me. You obeyed them and even praised them to avoid being persecuted by them. Beware now! No mortal shall be obeyed if his obedience entails disobedience of the Lord.

Whosoever obeys Allah shall be obeyed and whosoever disobeys his Lord shall be disobeyed. Obey me as long as I obey Allah; stop obeying me when I cease obeying Allah. I have spoken what I deemed proper and I pray for myself and for you.” (Golden Words 20)

He was a Companion of the Prophet (sa) who was appointed in authority positions very early in the Islamic Caliphates of Umar and Uthman.

“Today is action, yesterday is example, tomorrow is death, and (the day) after tomorrow is a wish that is difficult to fulfill.” (Golden Words)

Allah has taken a pledge from religious scholars to speak the truth clearly and not hide it.’ (Golden Words 47)

“The scale (of good deeds) will be light for whosoever fills it with following the falsehood in this world. The scale in which falsehood is placed will be light tomorrow. Allah mentions the people of Paradise and mentions them with the best of their deeds and overlooks their evil deeds. When I remember them, I say: I am afraid I may not catch up with them. Allah also mentions the people of Hellfire and He mentions them with the vilest of their deeds and their best deeds will be rejected. When I remember them, I say: I wish I am not among these people.” (Abu ‘Aziz 45)