Some Quran Quotes Addressing You 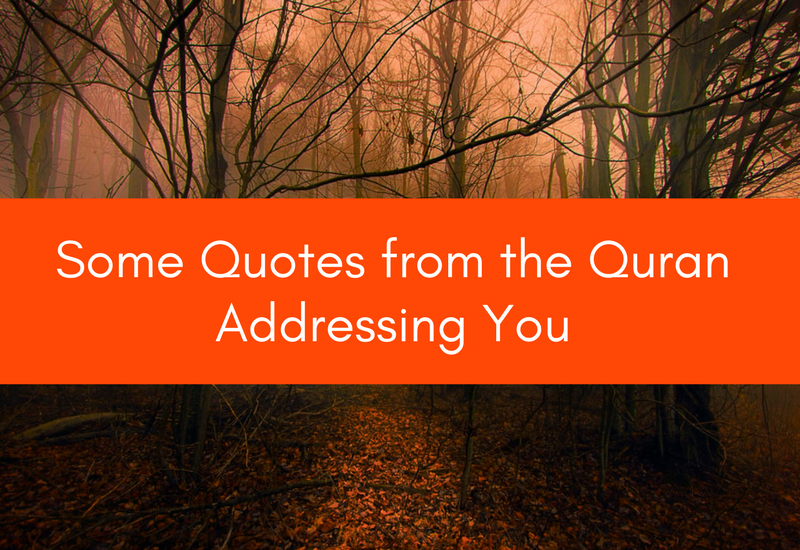 The first of these addresses is in Surat al-Baqarah. First, Allah explains about three groups of people – those who are able to benefit from the Quran, those who can’t, and those who pretend to do so but in reality are against it. Then He addresses all human beings, reminding us of His favors:

“O mankind, worship your Lord, who created you and those before you, that you may become righteous – [He] who made for you the earth a bed [spread out] and the sky a ceiling and sent down from the sky, rain and brought forth thereby fruits as provision for you. So do not attribute to Allah equals while you know [that there is nothing similar to Him].” (2:21-22)

A similar verse is:

Some other verses addressing all human beings:

“O mankind, indeed We have created you from male and female and made you peoples and tribes that you may know one another. Indeed, the most noble of you in the sight of Allah is the most righteous of you. Indeed, Allah is Knowing and Acquainted.” (49:13)

“O mankind, indeed the promise of Allah is truth, so let not the worldly life delude you and be not deceived about Allah by the Deceiver.” (35:5)

“Say, [O Muhammad], “O mankind, indeed I am the Messenger of Allah to you all, [from Him] to whom belongs the dominion of the heavens and the earth. There is no deity except Him; He gives life and causes death.” So believe in Allah and His Messenger, the unlettered prophet, who believes in Allah and His words, and follow him that you may be guided.” (7:158)

“O people, an example is presented, so listen to it. Indeed, those you invoke besides Allah will never create [as much as] a fly, even if they gathered together for that purpose. And if the fly should steal away from them a [tiny] thing, they could not recover it from him. Weak are the pursuer and pursued.” (22:73)

“O mankind, remember the favor of Allah upon you. Is there any creator other than Allah who provides for you from the heaven and earth? There is no deity except Him, so how are you deluded?” (35:3)

“And when My servants ask you, [O Muhammad], concerning Me – indeed I am near. I respond to the invocation of the supplicant when he calls upon Me. So let them respond to Me [by obedience] and believe in Me that they may be [rightly] guided.” (2:186)

About the Day of Judgment

“O People, if you should be in doubt about the Resurrection, then [consider that] indeed, We created you from dust, then from a sperm-drop, then from a clinging clot, and then from a lump of flesh, formed and unformed – that We may show you. And We settle in the wombs whom We will for a specified term, then We bring you out as a child, and then [We develop you] that you may reach your [time of] maturity. And among you is he who is taken in [early] death, and among you is he who is returned to the most decrepit [old] age so that he knows, after [once having] knowledge, nothing. And you see the earth barren, but when We send down upon it rain, it quivers and swells and grows [something] of every beautiful kind.” (22:5)

About the Messenger (PBUH)

“O Mankind, the Messenger has come to you with the truth from your Lord, so believe; it is better for you. But if you disbelieve – then indeed, to Allah belongs whatever is in the heavens and earth. And ever is Allah Knowing and Wise.” (4:170)

“O mankind, eat from whatever is on earth [that is] lawful and good and do not follow the footsteps of Satan. Indeed, he is to you a clear enemy.” (2:168)