5 Istighfar Duas from the Quran and Sunnah 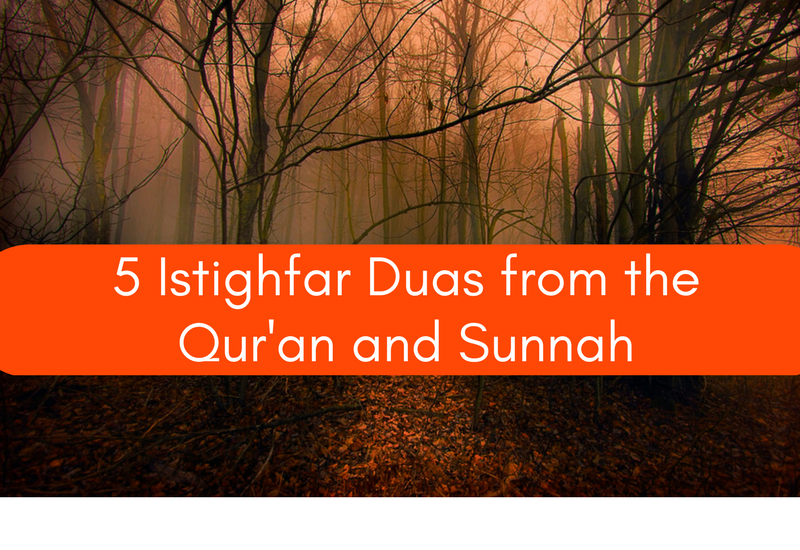 One of the realities of life for us is that no matter how hard we try, we often fall short and commit sins. The good thing about being a Muslim however, is Allah (swt)’s promise that He will go on forgiving us no matter how many/big our sins are, as long as we pray to Him and aspire for His forgiveness (Tirmidhi). This is the purpose of istighfar- to seek forgiveness from Allah (swt) from every wrongdoing that we have committed.

Why should you seek forgiveness?

Every sin that a Muslim commits counts against them on the day of judgement, except if Allah (swt) chooses to forgive them. And we know that as humans, we are very fallible and prone to committing sins no matter how little. So we should always seek forgiveness so that our sins are wiped from our book of deeds and we can increase our chances of entering Jannah (paradise).

What are istighfar duas?

When we seek forgiveness from Allah (swt), we do so in the same way that we recite duas for other things that we ask him for. And like all duas that we recite in Islam, duas for istigfhar have been taught to us from the Quran, as well as the Sunnah of the Holy Prophet Muhammad (saw), so that we can use them as a means of seeking forgiveness and getting closer to Allah.

Here are some istighfar duas that you can incorporate into your daily worship as a way to consciously seek the forgiveness of Allah (swt).

This is a dua that was narrated by Ibn Umar. He was quoted in the hadith to have said: “We counted our Messenger’s saying a hundred times during one single sitting: Rabb- ighfir li, wa tubb ‘alayya, innaka Antat-Tawwaabur-Rahim. (My Rab! Forgive me and pardon me. Indeed, You are the Oft-Returning with compassion and Ever Merciful.” (Riyadu-s Saliheen)

This dua, unlike the first dua, and like the rest of the istighfar duas is more encompassing as it goes beyond just asking for forgiveness. It also asks for pardon while praising Allah (swt) with some of His majestic attributes.

This is another prayer for seeking forgiveness that has been quoted directly from the Prophet. According to a narration by Ibn Mas’ud, The Messenger of Allah (saw) said, “He who says: ‘Astaghfir ullah-alladhi la ilaha illa Huwal-Haiyul-Qayyumu, wa atubu ilaihi (I seek the forgiveness of Allah, there is no true god except Allah, the Ever-Living, the Self- Subsisting, and I turn to Him in repentance),’ his sins will be forgiven even if he should have run away from the battlefield (while he was engaged in fighting for the Cause of Allah).” (Riyadu-s Saliheen)

Before the Prophet (saw) passed away, this form of seeking forgiveness became more frequent for him according to a hadith narration by his beloved wife A’ishah (ra). She was quoted to have said that: “Prior to his demise, the Messenger of Allah (saw) used to supplicate frequently: Subhan Allahi wa bihamdihi; Astaghfirullaha wa atubu ilaihi (Allah is free from imperfection, and I begin with praising Him. I beg forgiveness from Allah and I turn to Him in repentance.” (Bukhari and Muslim)

One of the attributes of this particular istighfar dua is that it also declares repentance, which is a condition for forgiveness being accepted from a Muslim. It is not enough to ask Allah to forgive us for a sin, to make our forgiveness whole and acceptable, we need to repent from the sin and make an intention to never return to that sin again.

“Allahumma Anta Rabbi, la ilaha illa Anta, khalaqtani wa ana ‘abduka, wa ana ‘ala ‘ahdika wa wa’dika mastata’tu, a’udhu bika min sharri ma sana’tu, abu’u laka bini’matika ‘alayya, wa abu’u bidhanbi faghfir li, fa innahu la yaghfirudh-dhunuba illa Anta. (O Allah! You are my Rab. There is no true god except You. You have created me, and I am Your slave, and I hold to Your Covenant as far as I can. I seek refuge in You from the evil of what I have done. I acknowledge the favours that You have bestowed upon me, and I confess my sins. Pardon me, for none but You has the power to pardon).”

This istighfar dua right here was described by the Holy Prophet (saw) as the best dua for seeking forgiveness. It is all encompassing of a Muslim’s total submission to Allah (saw), our acceptance of His power over us, our acceptance of our own fallibility, and a plea for forgiveness and pardon.

All of these istighfar duas have been given to us as a means of returning to Allah (swt) after we have sinned, and we should make them a constant part of our daily worship so that we can be known to our Creator as part of those who repent to him.