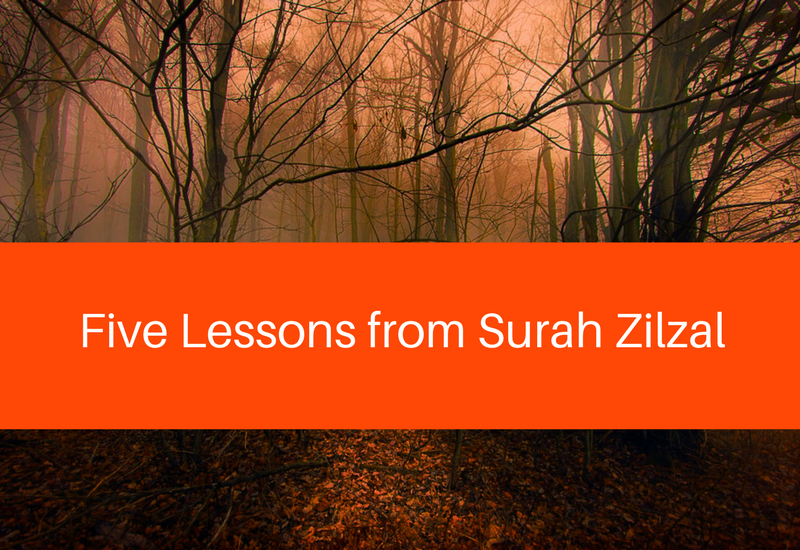 Surat al-Zilzal or Surat al-Zalzalah, the ninety-ninth surah of the Quran, discusses the Day of Judgment in a beautiful and vivid way. Here are some points we can draw from it.

The earth was always meant to shake.

Note the pronoun ‘its’ going back to the earth. Islahi (rahimahullah) explains the significance of this minute point:

“Keeping in mind this technical delicacy, the correct meaning [of the ayah] is: ‘when the earth shall be shaken the way it ought to be shaken’ or: ‘when the earth shall be shaken the way it is destined to be shaken’. In other words, what is really being implied here is that the extent to which it will be shaken cannot be imagined today. The actual way in which it will reel, totter and stagger as pre-ordained by the Almighty is an event beyond imagination. But one thing which is absolutely certain is that all this is bound to happen. Therefore, it is in the well being of a person to remain alert about its arrival and not spend his life remaining unmindful to it.” (Islahi 2)

The earth will, literally, vomit the things we put in it.

“The word ‘ثقل ‘ means ‘weight’ or ‘burden’. Here, its foremost connotation are the dead who have been buried in the earth and who will be thrown overboard by it on the Day of Judgement. But, since the word is also used in the general sense, it can also imply the buried riches and treasures as well as any traces of the hidden offences committed by criminals.” (Islahi 2-3)

There are dumb witnesses to our deeds who will be given the ability to speak out on the Day of Judgment.

When we sin, we often don’t think about the witnesses who can see us. Among these witnesses, there are some we might consider as dumb witnesses – our own body parts, our hands and feet, and the earth. But these objects will be given the ability to speak and testify against us on the Day of Judgment.

“The earth will … narrate its story at the intimation of the Almighty, enabling its inhabitants to have a clear idea of all what they had said or done upon its surface or hidden beneath it.” (Islahi 1)

“Whatever a person does in this world is either done upon or beneath the earth. As such, it must be regarded as the greatest witness to all his deeds. Just as the Almighty will endow man’s limbs and organs with the faculty of speech to narrate his life’s record and bear witness against him, the earth also will be made vocal by Him that it may also recount his history.” (Islahi 4)

You may also like: Arguments in Surah Yasin Proving Bodily Resurrection

On that day, people won’t have the comfort of family, friends and supporters around them.

“That Day, the people will depart separated [into categories] to be shown [the result of] their deeds.” (99:6)

“[It will be said to them], ‘And you have certainly come to Us alone as We created you the first time, and you have left whatever We bestowed upon you behind you. And We do not see with you your ‘intercessors’ which you claimed that they were among you associates [of Allah ]. It has [all] been severed between you, and lost from you is what you used to claim.’” (6:94)

People will be stripped of all the worldly fame and pomp they had earned in life. They will not have their supporters around them, nor their close ones, to pump them up in the hardest test of their existence.

“The word ‘ashtaat’ means ‘in a separate or solitary manner’. In other words, on the Day of Judgement, people will emerge from their graves without having their family about them. None of their tribesmen or relatives, comrades or supporters will be present with them. Also, they will be without the pomp and show and the worldly riches they had amassed. Even the deities they had associated with God will not be present to intercede for them. Everyone will stand alone to reckon with the results of his own deeds.” (Islahi 4)

Often we wait for big occasions like Laylatul Qadr or the day of Arafah to amass good deeds by praying all night and making dua and dhikr all day. But we tend to overlook those thousands of little moments when doing seemingly insignificant everyday actions and words can add up drop by drop to make an ocean of rewards.

The Prophet (sa) said, “Don’t consider anything insignificant out of good things even if it is that you meet your brother with a cheerful countenance.” (Muslim 2626)

And the same applies the other way round too.

The Prophet (sa) is reported to have said: “Beware of the sins that are belittled. For verily, they are gathered in a man until they destroy him.”  (Ahmad, qt in Ibn Kathir 99.1)

A Walk in the Shoes of Umm Salamah R.A.
Who Wrote The Quran?
Jannah Described in the Holy Quran

One response to “Five Lessons from Surah Zilzal”