What Does Islam Mean? 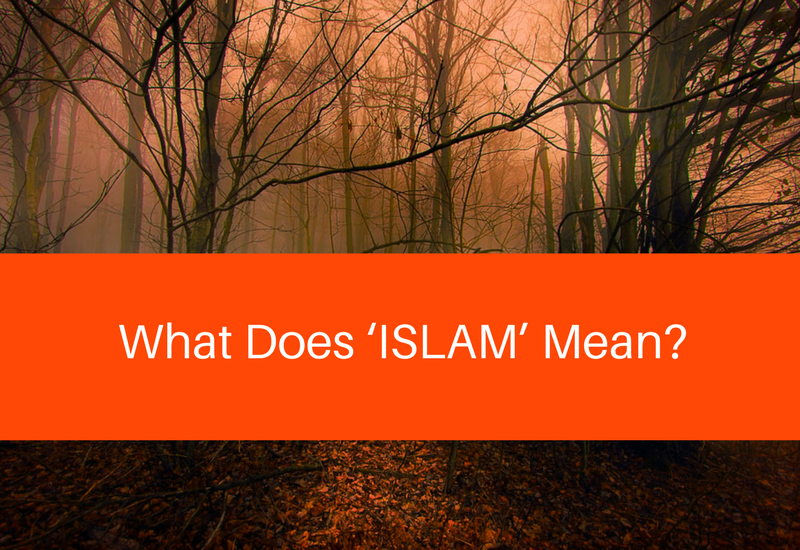 If you are not a Muslim then this might be just the right one for you to begin with, Insha Allah! But if you are already a Muslim Alhumdulillah, then you might be thinking something like ‘not for me… lets read something else’. If that is the case, then I would humbly suggest you to bear with me for a while and give it a glance. Islam is beyond what we casually perceive it to be. Trust me!

If someone asks the question- what does ‘Islam’ mean, literally in one word then the answer would be ‘Submission’; but the answer is still incomplete because it needs way more than just a single word to be explained; and that is quite obvious because why otherwise would it have taken so long for the message to be complete? It took quite a span of time for the following Ayah to be revealed:

“…This day I have perfected for you your religion and completed my favour upon you and have approved for you Islam as religion…” [Al-Ma’idah:3]

Islam means complete submission by the soul to the Will of its Master- Allah, the way a slave does! That means one has to abide by the Laws defined by Allah & live by the Halal & Haram in the least, not out of compulsion but ‘just because He wants it that way’! It may be so that not every Command would make sense to us, but we still submit to His Command. We should not require a reason for everything… His Will… our submission… “sami’na wa ata’na” (we hear and we obey)… that’s the way it goes!

In order to perfect the Submission, His Will must be our priority and we must go beyond the Halal & Haram, permissible or not permissible, and intentionally looking for ‘fatwas’ on the internet that incline towards our materialistic desires, while providing us a two-way pass and silence our conscience. We have to aim for a level wherein we ponder and wonder before any action-  Will Allah love me more if I do this, or if I do that?… Will He be more pleased if I do this act, or if I leave it?… What more can I do that I earn His Nearness?… What is the best way to thank Him?… How can I perfect my slavery… my submission… my Islam?

What does the Quran say about Islam?

Before humanity came into existence, Angels & Jinns existed. Then Allah decided to create us and so He created Adam (A.S.). He commanded the Angels and the Jinns to prostrate to Adam, to which no one refused except one of the Jinns- Iblis, who became Satan as a result of his disobedience and pledge to lead us astray. He then whispered to our father Adam & Hawa to eat from a tree which eventually led them to this Earth (keeping the long story short).

Our souls were created all at once and together we all testified that Allah is our only Rabb. Satan makes us neglect that fact. He will never leave us alone not even for the blink of an eye.

“O you who have believed, enter into Islam completely and do not follow the footsteps of Satan. Indeed, he is to you a clear enemy.” [2:208]

Allah says in the Qur’an:

“Yes, whoever submits his face in Islam to Allah while being a doer of good will have his reward with his Lord. And no fear will there be concerning them, nor will they grieve.” [2:112]

“And whoever desires other than Islam as religion- never will it be accepted from him, and he, in the Hereafter, will be among the losers.” [3:85]

“So whoever Allah wants to guide- He expands his breast to Islam; and whoever He wants to misguide- He makes his breast tight and constricted as though he were climbing into the sky. Thus does Allah place defilement upon those who do not believe.” [6:125]

“So is the one whose breast Allah has expanded to Islam and he is upon a light from his Lord like one whose heart rejects it? Then woe to those whose hearts are hardened against the remembrance of Allah. Those are in manifest error. ” [39:22]

“And who is more unjust than one who invents about Allah untruth while he is being invited to Islam. And Allah does not guide the wrongdoing people.” [61:7]

These are the various instances in the Quran where Allah discusses regarding Islam. We derive from these verses that Islam is the only religion accepted by Allah, it is the Guidance and the path to save ourselves from Satan and from the Hellfire. It is the path to ultimate success!

Related – What is success in Islam

What do the Hadith say about Islam?

On the authority of ‘Umar r.a., who said:

“While we were one day sitting with the Messenger of Allah ﷺ, there appeared before us a man dressed in extremely white clothes and with very black hair. No traces of journeying were visible on him, and none of us knew him.

He sat down close by the Prophet ﷺ, rested his knee against his thighs, and said, “O Muhammad! Inform me about Islam.” Said the Messenger of Allah ﷺ “Islam is that you should testify that there is no deity save Allah and that Muhammad is His Messenger, that you should perform Salah (ritual prayer), pay the Zakah, fast during Ramadan, and perform Hajj (pilgrimage) to the House (the Ka’bah at Makkah), if you can find a way to it (or find the means for making the journey to it).” Said he (the man), “You have spoken truly.”

We were astonished at his  questioning him and telling him that he was right, but he went on to say, “Inform me about Iman (faith).” He ﷺ answered, “It is that you believe in Allah and His angels and His Books and His Messengers and in the Last Day, and in fate (qadar), both in its good and in its evil aspects.” He said, “You have spoken truly.”

Then he (the man) said, “Inform me about Ihsan.” He ﷺ answered, “It is that you should serve Allah as though you could see Him, for though you cannot see Him yet He sees you.” He said, “Inform me about the Hour.” He ﷺ said, “About that the one questioned knows no more than the questioner.” So he said, “Well, inform me about the signs thereof (i.e. of its coming).” Said he ﷺ, “They are that the slave girl will give birth to her mistress, that you will see the barefooted ones, the naked, the destitute, the herdsmen of the sheep (competing with each other) in raising lofty buildings.” Thereupon the man went off.

I waited a while and then he ﷺ said, “O ‘Umar, do you know who that questioner was?” I replied, “Allah and His Messenger know better.” He said, “That was Jibril. He came to teach you your religion.””

Now in this Hadith our topic of concern is ‘Islam’ (chronologically the first question posed by Jibril a.s.). Surely, there is no doubt regarding the fact that this definition is the best as the questioner is Jibril A.S. and the one answering is our Beloved Prophet Muhammad who is the best of mankind to walk the face of the planet.

In the answer are mentioned the five pillars of Islam which means that if Islam is considered a fortress, then there are five pillars on which it stands; all of them being of utmost importance for the strength and integrity of the fortress.

The five pillars of Islam according to the Hadith are:

The Shahadah is the first step of Islam. There comes a big responsibility with it.

Scholarly texts describe that to perfect each part of the Shahadah, one needs to fulfill certain conditions.

For perfecting the first part of Shahadah i.e. Tawheed, these 7 conditions are required:

For perfecting the second part of Shahadah i.e. Risalah, these 6 conditions are required:

If we say the Shahadah sincerely and honestly, we will not do anything which contradicts with or violates the Shahadah.

But what does Iqamat as a suffix mean with it, you might be wondering? You might have read that term during recitation of various verses of Quran.

Iqamat means ‘establishing’ something which, in this case is used for the establishment of Salah because it is not merely performing prayers but there is much more to it. It includes the following components according to scholarly texts:

And if all that seems like a bit too much, then let us recall that we were prescribed with ‘Fifty prayers a day’ initially which were reduced multiple times by the mercy of Allah until the Almighty decided it would be five prayers only, WITH A REWARD OF 50 !!! SubhanAllah !

The term ‘Zakat’ comes from the root word of the term ‘Tazkiyah’ which means ‘purification’. In this case, Zakah is a means for the purification of our wealth and property.

Zakat is prescribed for certain things, in certain ways or percentages, under certain conditions.

Pilgrimage to the House (Kaaba) is obliged upon a person once in a lifetime if he can easily travel, financially afford it, and complete other duties such as clearing any debt.

One must hasten for Hajj and not delay it.

This pilgrimage is the largest gathering of our Ummah at one place. We seek Allah’s pleasure along with all the discomfort that might be during the journey,  & adjusting and compromising solely for the sake of Allah.

It must not be belittled that not only the Manaasik of Hajj matter but also the intentions/behaviour/etiquettes/discipline in Hajj are all critical.

If that was your Ramadan story, then hold on! Step back, revive & restart because that is a serious problem.

Ramadan isn’t a fasting and feasting game as they say it. It’s a training program wherein Satan is nowhere in the scene. We cut down on our body needs to listen to and pay heed to the needs of the soul to feed its spiritual hunger, and we strengthen it for the upcoming attacks of Satan during the year.

The Hidden Hikmah: How To Reap Benefits From Your Trials
Four Lessons from Surah al-Kahf’s First Story
5 Lessons from the Story of Prophet Yunus

3 responses to “What Does Islam Mean?”