Why Do People Convert To Islam? 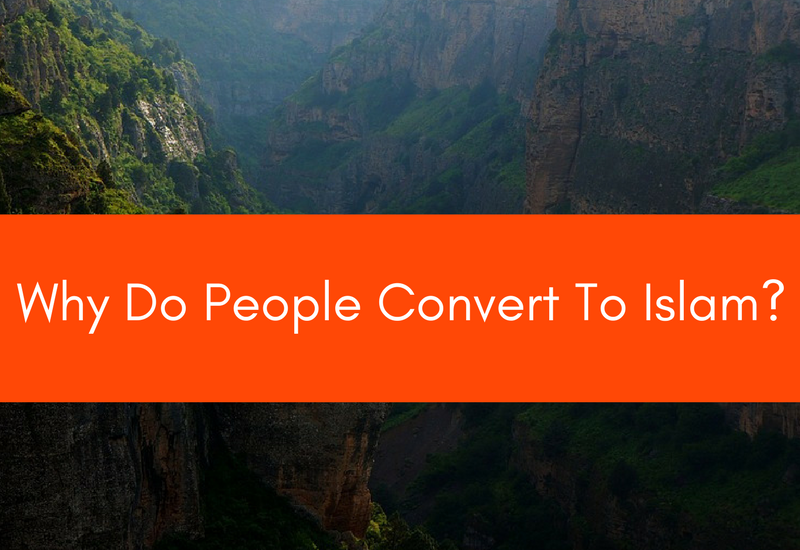 In the interest of impartiality, and instead of boring you with textbook answers and philosophical conclusions, I headed out to the streets with my virtual camera crew to ask people this very same question.

“Why do you think people convert to Islam?” I asked a young woman who seemed a teensy bit too excited to be on national TV.

“I don’t think Islam is growing fast because people are converting. It’s coz Muslims like big families. They get lots of kids and over-populate the world!” she giggled.

“Excuse me sir, can I ask you, why do you think so many people are converting to Islam?” I stopped a grumpy-looking middle aged man.

“Mozlem men grow long beards and have many wives!” he barked.

“Women in ‘Izlam’ are oppressed!” he interrupted. “Mozlems raise their kids to join ISIS and terrorize the world!”.

“I’m sorry I don’t think you understood the question,” I said, puzzled. “I’m asking why you think conversion rates to Islam are constantly on the rise.” I added as he walked away. “Ummm sir?”

I approached a nice looking couple at the train station and asked the same question.

“I think people were shocked and intrigued about the teachings of this religion after the 9/11 incident.” The young man replied. “The word ‘Islam’ was literally the highest rated search term on ‘Google’ for a long time. I think taking the time to actually learn about it showed the stark difference between what the media portrays and the reality of Islam”

“I agree” The young woman smiled. “Besides, believing in only One God gives people the balance and serenity they yearn for, especially during turbulent times like these”

“Are you guys Muslim?’ I grinned.

“AlhamduleAllah” They both pronounced the Arabic words in a foreign accent. “We both reverted to Islam six months ago.”

“I might sound silly but do you mind if I get a picture with you?” I asked, feeling like I was in the presence of renowned heroes or celebrities.

Well, at least to me they were.

I was born and raised Muslim in an all-Islamic country to religious parents, so I won’t pretend I understand the struggle that comes with changing your whole belief system, your life style, and suddenly being the odd one out within your own social circles, where sometimes you feel like you no longer belong with non-Muslims and don’t quite fit with the deep-rooted and established Muslim community. I’ll never understand how converts can fast in Ramadan so swiftly, while it took us years of gradual transitions, beginning at the age of seven when we pretended the day started at noon! Seriously, how do you guys do it? And most importantly, why did you do it? Given how unattractive and harsh our religion must seem on international media channels, I must admit I’m genuinely curious!

You may also like: Arabic Conjugation (Verb), Pronouns and the Quran

After much research, binging on YouTube videos filmed by converts and sifting through many emails sent from new Muslims kind enough to help me write this piece objectively, here are the top most common answers to this intriguing question: Despite the war against Islam, how did converts find peace?

One God, one book, one message, and a final prophet whose teachings, dated back to the 600s, are currently being proven to be miraculous. Becoming Muslim feels like the final step to reaching true peace. It makes sense to worship the Creator alone, and not His creations.

2- “There’s serenity in this direct relationship with the Almighty Lord.”

No need for ‘private confessions’ to priests and no need for ‘salvation’. Islam is a religion of open and honest communication with God. There’s no middleman here. For Allah, the All-Knowing, knows your thoughts and secrets. He listens to your prayers and is the only One capable of opening your mind and softening your heart. This soothing concept washes our exasperating feelings of loneness away.

3-“The ‘staged violence’ has reached a point where it’s become ludicrous.”

This reason might seem weird but go with me. The attacks on us because of a few extremists that we ourselves condemn have proved suspicious. The ‘intolerance’ attacks hail on all Muslims like thunderbolts, blaming Islam for the carnage and never giving a chance to explain. The biased hate is palpable. If it were true that almost two billion Muslims are actually taught killing non-Muslims was their gateway to eternal heaven, they would have united and erased the rest of the population in no time at all! It’s become glaring how many political entities are using the media to try and corrupt the image of Islam because they’re threatened by its strength. Average citizens are ultimately seeing through these schemes and making their own decisions.

4- “Many Christians have finally cracked the code, and if you read the Bible carefully, you’ll crack it too.”

It is a shocking revelation for many to realize that nowhere in their Holy books does Jesus say that he is God. In fact, the first of the Ten Commandments in the Bible clearly states ‘Do not have any other god before God’.

5- The Holy Qur’an has never been changed and will never be changed till the end of time. This fact is extremely comforting and appealing, especially for those desperately seeking the truth. Millions of people over the past centuries and from around the globe have learnt the whole book by heart. 6236 verses; word-by-word and letter-by-letter. If this isn’t a miracle, I don’t know what is.

6- Some people take the plunge into studying the Holy Qur’an for the sole purpose of proving it wrong, yet are surprisingly transformed into firmly persuaded converts. The rules of Islam are all based on logic, morals, justice and matters of the heart. And unlike popular belief, the basic pillars and practices are clearly documented; there is hardly any room for confusion.

Honestly, no matter what the reasons are, I believe there’s a higher divine wisdom that we can never fully conceive. A part of us will always wonder why some hearts are opened to the final message and why others are repelled by it. Why, Omar Ibn Al Kattab, a former enemy of Islam; is now buried next to our beloved prophet, while Abu Taleb, Prophet Muhammad’s own supportive uncle, died a disbeliever. We will never completely understand why some will reject this faith even if they personally experience a million specific proofs and wonders, and why others will embrace it with only one random sign.

Time to quote the familiar Qur’an verse echoing in your mind right now?

Yes, I think so too…

“In the name of Allah, The Most Merciful and The Most Compassionate.

‘Indeed (O Muhammad), you do not guide whom you like, but Allah guides whom He wills. And He is most knowing of the (rightly) guided’ (Holy Quran, 28:56)

I don’t know what kind of spiritual power it takes to conquer such challenges, and I don’t know if born Muslims would have been able to do the same had they been put in your situation.

All I know is we value the thing we earn, and appreciate the beauty in it more. As converts, you must see the world through a different lens. You probably see lights and colors we don’t even know can exist in this life….

All I know is being Muslim isn’t a label we hold onto or run away from.

Some non-Muslims convert for all the wrong reasons, and some Muslims apostatize after being on the right track.

Some non-Muslims practice our faith without even knowing it, while some Muslims need to convert to Islam and start learning about their religion.

The truth is, there’s more to life than this life…

May you find your new homes inside our hearts, through our prayers and within our love and support.
And may peace always and forever be upon you…