Virtues and Blessings of Surah al-Baqarah 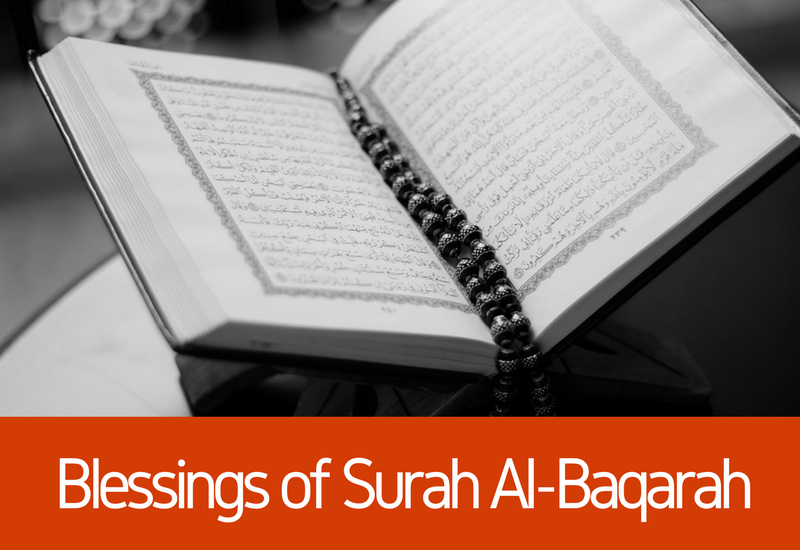 The second surah of the Quran, the largest in length, revealed over several years in the Madinan life of the Prophet (sa), Surat al-Baqarah is special in many ways. Although all surahs of the Quran are miraculous and of divine origin, the Prophet (sa) singled out some of them and told us of their different virtues and blessings.

Surat al-Fatihah is the introduction to the Quran. As such, Surat al-Baqarah can be regarded as its first chapter. In this surah, Allah (swt) introduces us to the Quran, and tells us about three different types of people – those who will benefit from the guidance of the Quran, those who won’t, and those who are only pretending to be people of the Quran. The rest of the surah is a beautiful blend of history, life lessons, and instructions.

There are several hadith that inform us of different virtues of this surah. Let us look at some of them.

The power of this surah as a protection against Shaytan is described in different ways in the hadiths. The Prophet (sa) said that Shaytan flees from a house where Surat al-Baqarah is recited. (Muslim 780) He also said that magicians cannot confront this surah. (Muslim 804)

He also pointed out the virtues of some specific ayat or sections of this surah.

He said, for example, “If somebody recited the last two verses of Surat al-Baqarah at night, that will be sufficient for him.” (Bukhari 5009)

Ibn Kathir quotes Darimi’s record of Sha’bi’s narrated from Ibn Mas’ud: “Whoever recites ten Ayat from Surat Al-Baqarah in a night, then Shaytan will not enter his house that night: four from the beginning, Ayat Al-Kursi (255), the following two Ayat (256-257) and the last three Ayat.”(Ibn Kathir)

Many of us know the virtues of Ayat al-Kursi, which is a part of this blessed surah. If you recite it when you go to bed, you will be guarded from Shaytan until dawn. (Bukhari 5010)

Related Post: Surah Fatihah – The Greatest Surah in the Quran

Angels come down to listen to it

A miraculous incident once happened to a Companion named Usayd ibn Hudayr.

“Usayd said narrating this incident, ’I was afraid lest it should trample (my son) Yahya. I stood near (the horse) and saw something like a canopy over my head with what seemed to be lamps in it, rising up in the sky till it disappeared.’

“The next morning Usayd informed the Prophet of the incident.

“The Prophet (sa) said, ‘Those were Angels who came near to you for your voice and if you had kept on reciting till dawn, it would have remained there till morning when people would have seen it as it would not have disappeared.’” (Bukhari 5018, Muslim 796)

Your Shade and Supporter on the Day of Judgment

On the Day of Judgment, different people and things will come and testify for or against you. Among them is the Quran. The Prophet (sa) said, “On the Day of Resurrection, the Qur’an and those who acted according to it will be brought, with Surat al-Baqarah and AIi ‘Imran preceding them.” (Muslim 805)

“Recite the Qur’an, for on the Day of Resurrection it will come as an intercessor for those who recite It. Recite the Two Bright Ones, al-Baqarah and Surah Al ‘Imran, for on the Day of Resurrection they will come as two clouds or two shades, or two flocks of birds in ranks, pleading for those who recite them. Recite Surah al-Baqara, for to take recourse to it is a blessing and to give it up is a cause of grief, and the magicians cannot confront it.” (Muslim 804)

Now that we have read some hadiths on the many blessings of this surah, the question to ask is: Why?

Why is this surah so blessed? Why did the Prophet (sa) say these amazing things about it?

We often take the Quran as a bunch of magic-words to parrot in order to drive Shaytan away. But the Quran isn’t just about memorising and repeating. It’s much, much more than that. As Allah (swt) says in the very beginning of Surat al-Baqarah, this book is guidance.

Surat al-Baqarah starts off by telling us what the Quran is, how we must approach it, and what qualifications we need to benefit from it. In the next article, we’ll look at the Quran’s introduction to itself, in sha Allah.

What Does Kareem Mean?
What You Can Learn From Surah Yaseen
The Quranic Method To Making Decisions

One response to “Virtues and Blessings of Surah al-Baqarah”