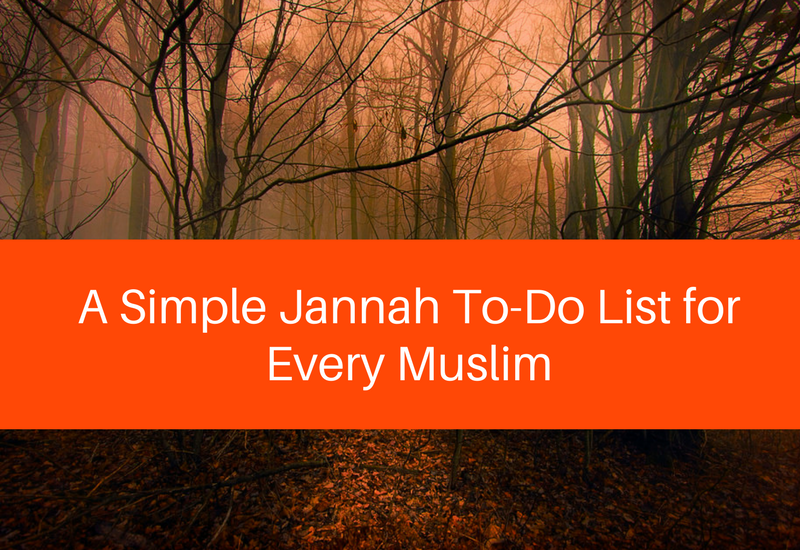 If I asked you what you want most as a Muslim, you will probably list all the good things of this life, or go straight to say Jannah. It is everyone’s dream. It is the reason we hold on strongly to our faith, and the reason we wake up every day striving to be better Muslims.

There is a lot of promise of Jannah in the Qur’an and sunnah for all believers, and we have been told that all the beauties of Jannah are beyond what our human minds can visualize.

It is more beautiful than your favorite earthly vacation spot, and the waters that flow in Jannah is the purest and sweetest of them all.

So, how do you increase your chances of being one of the inhabitants of Jannah? What can we do to show Allah (ta’ala) that we desire to see His face in the afterlife? Because only the people of Jannah will get to see the face of our Creator.

I have compiled a simple list; as usual, actions that can be woven into our everyday life so that we can earn the reward of paradise if Allah wills.

We already know that the five daily prayers are compulsory and that they by themselves are a means of entering Jannah.

But what about the non-obligatory ones.? The nawafil salah that you get up to make when the whole world is asleep, or the two rak’ahs here and there before and after most compulsory salahs?

“Whoever prays twelve rak’ahs in a day, a house will be built for him in Paradise.” (Sunan an-Nasa’i)

Many people are unable to offer as many nawafil prayers as much as they want, probably because of school, work, kids, etc., but let’s look at the reward of spending eternity in the best place ever, and use that as a motivation.

Make a habit to offer the nawafil prayers before and/or after every salah, and get up for at least two units of prayer during the night. The reward is well worth it.

The religion of Islam is beautiful. Several times, Allah (ta’ala) encourages us to ask and He will provide for us.

Did you know that it is also equally that simple to ask for Jannah?

The prayer to ask for Jannah: اللَّهُمَّ إِنِّي أَسْأَلُكَ الْجَنَّةَ

“O Allah, I ask You of Paradise”

Whisper this prayer to yourself everywhere you go, every single day.

If you were to die today, what do you think your last words would be? How naturally does the shahada come to your lips? For many Muslims, myself included, the shahada comes only during prayers or when performing ablution.

But it is one of those statements, simple but heavy, with the capacity to get us on those reclining gold chairs in Jannah.

The Messenger of Allah (SAW) was quoted as saying: “If anyone’s last words are “There is no god but Allah” he will enter Paradise.” (Sunan Abi Dawud)

So, the same way we make a commitment to ask for paradise several times in a day, whisper the shahadah to yourself as much as you can during the day.

Ever wondered why people say that you are a sum of your five closest friends? That is because we tend to hang around people that are similar to us. You most likely will never consider making friends with someone without anything in common between you too.

We become friends with people because we share something, could be work, similar taste in movies, or just that we’ve been in the same schools together.

Once when the Prophet (SAW) was talking about the gardens of paradise, some companions asked what those gardens are. The Holy Prophet replied: “The circles of remembrance.” (Tirmidhi)

Hang out with people who remember Allah (ta’ala) often. Make friends with people whose faces light up at the mention of their Rabb, and whose hearts are attached to the Qur’an.

These types of people will only gather where Allah (ta’ala) is remembered, and the reward is Jannah if Allah wills.

5. Maintain the Ties of Kinship

As we build a bond with righteous friends, it is equally important to keep the bonds of family. We have enough distractions in this age already. Everyone goes out of state to school, work, or start a new family, and we find ourselves slowly drifting away from our relatives, only to be seen during festivals or on the occasional video calls.

But amid all our busyness, we should remember that Islam places such a high value on the ties of kinship. So much so that Prophet Muhammad (SAW) said that “The person who severs the bond of kinship will not enter Paradise.” (Bukhari)

Call your relatives often. Visit whenever possible. Keep them in your prayers, and show them love. Because in doing all these, we are unconsciously seeking Jannah for our own selves.

Every Muslim knows that the sum of how good of a believer you are depends a lot on your character. How you treat people and how you interact with them says a lot about you as a Muslim.

And it also turns out, not surprisingly, that good character is a way to Jannah.

Avoid quarrelling or lying, and if Allah wills, Jannah is yours.

When we set goals to achieve something in our lives, we make a list of tasks of what we need to do to meet our goal. We take these tasks one at a time and eventually, they lead us to the goal.

This is what a Jannah to-do list does for you. When you wake up daily, pick one thing at a time and do it. We never know when we will return to our Lord, but we all know that whenever that time comes, we want to be of those who will reside in the beautiful gardens of Jannah.