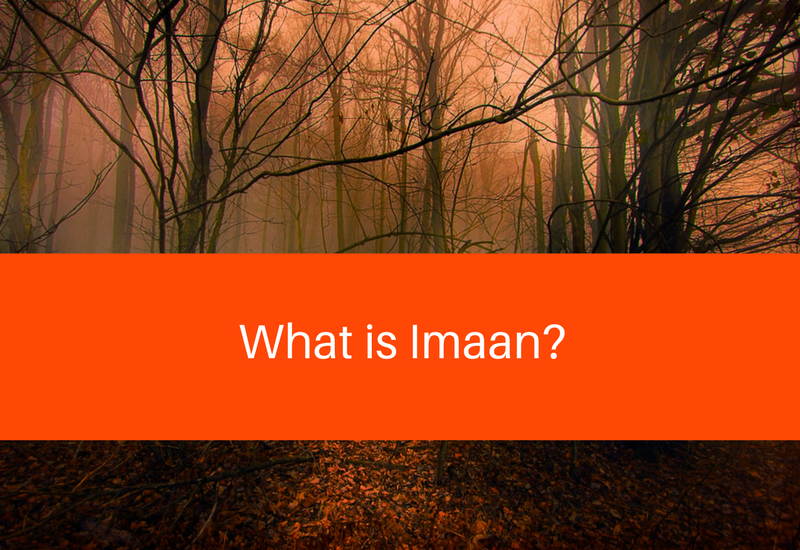 “…The Messenger of Allah said, “It (Imaan) is that you believe in Allah and His angels and His Books and His Messengers and in the Last Day, and in qadar (fate), both in its good and in its evil aspects….” [al-Bukhari & Muslim]

Belief in Allah: This includes recognizing, affirming, testifying and believing that there is only one God, Allah; believing in His Names and Attributes as mentioned in the Quran and Sunnah.

His Messengers:  A messenger is any human chosen by Allah to receive revelation from Him and pass that revelation on to his people. Muslims believe in all the Prophets sent by Allah from the starting of time until Muhammad who is the last Prophet.

The Last Day: On this day, every person is taken into account for every single deed of theirs, and rewarded with Paradise or punished with Hellfire. Belief in the Last day should make a believer rush to do good deeds and stay away from sins, repent constantly and seek Allah’s pleasure.

Qadar (fate), both in its good and in its evil aspects: When a Muslim realizes that all things are under the control and decree of Allah; it makes it easier for him to put his complete trust in Allah and surrender to Allah’s Will.

A person with high imaan:

Ø  Prays all the sunnah rakats.

Have you noticed that the extra acts of worship I’ve mentioned above, like praying tahajjud or salatul duha only take about 5-10 minutes of your time?! And the reward for spending 10 minutes extra in Allah’s worship: Higher levels in Jannah!

Imaan goes up and down

So, is it possible for a person to always be in a state of imaan high 24/7? No. It is common for Muslims to suddenly feel energetic and do all acts of worship, followed by days when doing even the obligatory acts of worship become burdensome.

What are some signs of weak imaan?

So, wondering how you can get an imaan high? Follow these simple yet powerful steps inshaAllah!

Begin with isthigfar and avoid major sins: Sins have a direct effect on our hearts and souls, making us feel spiritually drained. Constantly engage in repentance, even if you don’t feel like. Allah notices the struggle that is going on in your heart, and He will help you come closer to him.

One step at a time: Pray 2 rakats and talk to Allah. Let Him know how you feel, why you’re feeling down, beg Him to get you back on His path and ask Him to raise you closer to Him. This always works, always.

Read Quran: If you haven’t read Quran for a long time, open the mushaf and read just half a page maybe or even less, take the first step, and the rest would be easy to follow inshaAllah.

Abdullah ibn Masood (RA) narrated the following dua to be recited, asking Allah to revive your heart with imaan.

Translation: Oh Allah! Revive us on our faith, in our conviction/certainty and in our understanding.

Imaan buddies: The kind of friends you hang out with have a direct impact on your relationship with Allah. Surround yourself with friends who remind you of Him, so when you feel down, you can always go back to them to lift you up.

We have to always be on guard and make sure our imaan does not get corrupted, for a weak imaan can turn our life into something that is totally meaningless and purposeless. What is in our heart will manifest in our tongues, in turn driving our limbs towards it. So when your heart is filled with imaan, your tongue will only utter words that are pleasing to Allah, and your body will rush to do deeds that please Him. Let us strive to keep a check on the status of our hearts at all times inshaAllah.

Surah Maryam Part 5 - A Meeting With Yahya (Alayhi Salam)
Quranic Verse 9:5 and the Concept of Abrogation (Naskh)
What is Zina in Islam?

One response to “What is Imaan?”