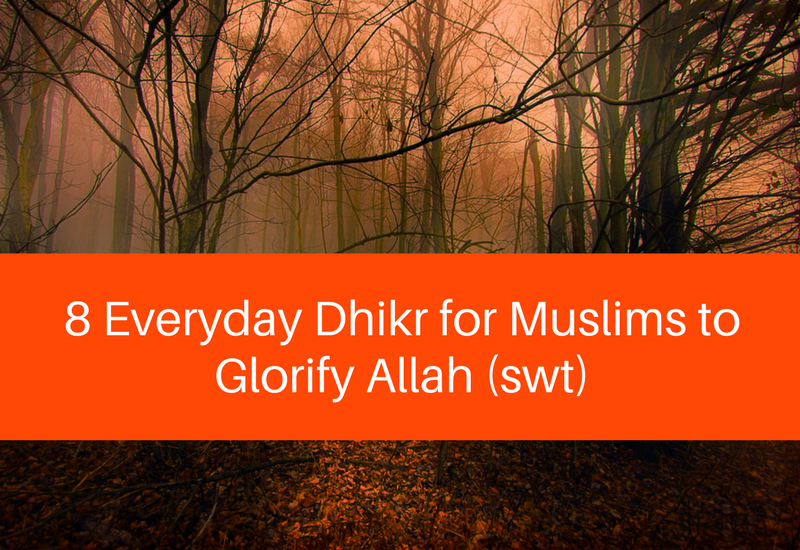 Dhikr – the remembrance of Allah (swt) through supplications, is one of the greatest gifts that Allah (swt) has bestowed upon us as Muslims. Unfortunately, in our daily grind, dhikr is also one of the acts of worship that are easily neglected.

Most times, many people barely get by with compulsory acts of worship like salah, so their minds are not even present enough to do dhikr.

The same way that compulsory acts of worship should be fulfilled by us, so also is the remembrance of our Lord. And how best can we do this? By trying to internalize some dhikr so much that they become second nature to us as wearing our clothes or eating.

The compilation of dhikr here are short and light on the tongue, but with some immense rewards that Allah (swt) has promised us. Let’s do our best to learn them, and more importantly, use them every day.

“How perfect Allah is and I praise Him.”

In a hadith narrated by Abu Huraira, the holy Prophet Muhammad (saw) said: “Whoever says: Subhan Allahi wa bi hamdihi (Glory and praise are to Allah) one hundred times, his sins will be forgiven even if they were like the foam of the sea.” (Sunan Ibn Majah)

In another related narration by a companion called Jabir, the Prophet (saw) once again said that “For him who says: ‘Subhan-Allahi wa bi hamdihi (Allah is free from imperfection, and I begin with praising Him, and to Him),’ a palm-tree will be planted in Jannah.” (Riyad as-Salihin)

Just look at the immense rewards of forgiveness and admission into Jannah for a phrase that is so light on the tongue that one can probably say it dozens of times in a minute.

“Glory be to Allah, praise be to Allah, there is none worthy of worship except Allah, Allah is Most Great, and there is no power and no strength except with Allah the Exalted and Magnificent”.

A man came to the Prophet (saw) and asked him to teach him something that he can say instead of reading the Qur’an, and this was the dhikr that the holy Prophet (saw) taught him.

“None has the right to be worshipped except Allah, alone, without a partner. To Him belongs all sovereignty and praise and He is over all things omnipotent.”

In another hadith narrated by Jabir, the holy Prophet (saw) said that “The best remembrance is: ‘there is none worthy of worship except Allah (Lā ilāha illallāh)’ and the best supplication is: ‘All praise is due to Allah (Al-ḥamdulillāh).’” (at-Tirmidhi)

“There is none worthy of worship except You, Glory to You, Indeed, I have been of the transgressors”.

This was indeed the dhikr of Prophet Yunus (as) when he was in the belly of the fish, and the holy Prophet Muhammad (saw) has said that any Muslim who supplicates with this dhikr will have his dua accepted. (at-Tirmidhi)

‘Glory is to Allah (Subḥān Allāh).’ ‘All praise is due to Allah (Al-ḥamdulillāh),’ ‘None has the right to be worshipped by Allah (Lā ilāha illallāh),’ and ‘Allah is the greatest (Allāhu akbar)’

The holy Prophet (saw) said that this phrase is more beloved to him than anything the sun has risen over. So much so that this is the phrase that he taught his daughter, Faatimah, when she came to him for help in employing the services of a person to assist her with the housework. (at-Tirmidhi)

“There is no might nor power except with Allah.”

The reward of this dhikr is to have your sins pardoned, even if they are like foam on a sea.

“How perfect Allah is and I praise Him by the number of His creation and His pleasure, and by the weight of His throne, and the ink of His words.”

One thing that you will notice with all these dhikrs is that they glorify the supremacy of Allah (swt) and they affirm Him as our creator. Imagine if we spent more time during the day being aware of the supremacy of our creator and constantly remembering Him with these words.

Imagine how much closer we would move to our Lord, how conscious of Him we will be, when we consciously glorify every chance we get.

Related Video: Does Allah Answer Every Dua of Muslims