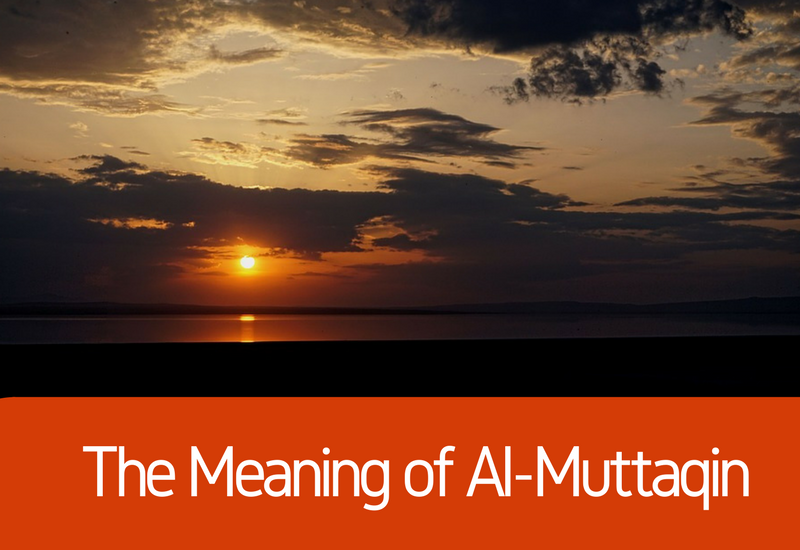 “This is the Scripture in which there is no doubt, containing guidance for those who are mindful of God (al-Muttaqin). (Quran, 2:2)

Let us look at how a Companion (Ubayy) of the Prophet (sa) explained it to Umar (ra):

He said, “Have you ever walked on a path that has thorns on it” `Umar said, “Yes.” He said, “What did you do then?” He said, “I rolled up my sleeves and struggled.” Ubayy said, “That is Taqwa.” (Ibn Kathir)

Taqwa is self-defence. It’s a defense against Shaytan and one’s own animal desires, against anything which clouds our rational mind from obeying Allah. According to Dr Islahi, taqwa is “to avoid sins, fearing its evil consequences and the wrath of Allah.” (105)

A muttaqi is a person who has taqwa, one who “lives in awe of Allah’s majesty, fears His wrath, and is fully conscious of the evil consequences of sin.” (Islahi 105)

In the previous article about the Quran’s introduction to itself, we saw how Surat al-Baqarah opens up with the Quran’s description as ‘guidance for the muttaqin’. The muttaqin are thus the first group of people addressed in the surah, and therefore highly deserve our consideration.

Guidance is only for the Muttaqin

Allah (swt) attributes the Quran’s guidance as belonging only to the Muttaqin, which means that we won’t benefit from any Quranic study unless we are Muttaqin. It’s therefore extremely important for us to know who these people are and how to be one of them.

“And We send down of the Qur’an that which is a healing and a mercy to those who believe, and it increases the Zalimin (wrongdoers) in nothing but loss.” (17:82).

Al-Muttaqin are present in every era

In the Quran, the difference between a verb and a noun matters a lot. Saying “those who fear God” is quite different from your saying “the God-fearing”. Al-Muttaqin is a noun, and it denotes stability, which means that this group of people is present in every era. “Allah is referring to a group of people who will always be there.” (Nouman Ali Khan)

We often look back at history and wish we could be like those awesome people, the Companions and the righteous. We suffer from spiritual inferiority complex – the opposite of arrogance but still highly unhealthy. We forget one thing – that just like us, they struggled too, and their struggles were different from ours.

“No matter how bad times get, how modern they get, the Muslim should not develop this sick mentality that ‘Man! I should have lived in the time of the Prophet (sa), because the good people were back then. Now it’s just us.’ And a lot of Muslims have accepted about themselves that they are bad people, that they can’t be people of taqwa, this is … negated from the very first discourse in Surat al-Baqarah by Allah (a.w.) using the word ‘Muttaqin’.” (Nouman Ali Khan)

There are two aspects of taqwa. The first is prerequisite to getting guidance from the Quran, and the second is the fruits of that guidance.

The prerequisite taqwa is the one which Allah (swt) has programmed inside our souls before we were even born.

“On the one level, [taqwa] is something inherent in all humans, as pointed out in the Qur’an in the words: ‘By the human soul and the proportion and order given to it; and its enlightment as to its wrong and its right.’ (91:7-8) This level of taqwa is an essential pre-requisite to appreciate and to accept any message of truth, virtue and goodness.” (Islahi 113)

“There is also a kind of taqwa before iman. [There] were people that … protected themselves from cheating, hurting other people, like Abu Bakar as-Siddiq (ra). Iman hasn’t touched him yet, but he still has something of taqwa.” (Nouman Ali Khan)

“So Allah (a.w.) in this ayah, by using ‘Muttaqin’, has actually opened the door for Muslims AND good non-Muslims all over the world.” (Nouman Ali Khan)

But then, if we all have this kind of taqwa, why aren’t we all guided by the Quran? It’s because this taqwa can be buried and lost. Who are the unfortunate people who lose this taqwa? Refer to the last ayah of Surat al-Fatihah.

“A person who loses this pre-requisite loses the ability to appreciate or accept any goodness or virtue. It provides the springboard for all good works and a basis of decency, courtesy and kindness. To respond to the message of the Qur’an, the presence of this taqwa or moral sense in human beings is an essential condition.” (Islahi 113)

“Anybody who comes to this book for guidance, if they have the quality that they want to save themselves from evil, from failure, and they come to this book, it doesn’t matter if they’re Christian, Jewish, agnost, atheist – whatever they are, they will find guidance in this Book.” (Nouman Ali Khan)

This means that every individual on earth can be guided to the Quran. All you need is a sense of morality and accountability, a sincere desire to find your life’s purpose, to achieve real success, to know more about God and your relationship with Him, and to protect yourself from evil.

Who are the people of taqwa?

Ibn `Abbas outlined some characteristics of the Muttaqin:

In the next few ayat of Surat al-Baqarah, Allah (swt) tells us who the people of taqwa are, as we will see in the next article, in sha Allah.