Who Are The People of Taqwa? – Part 1 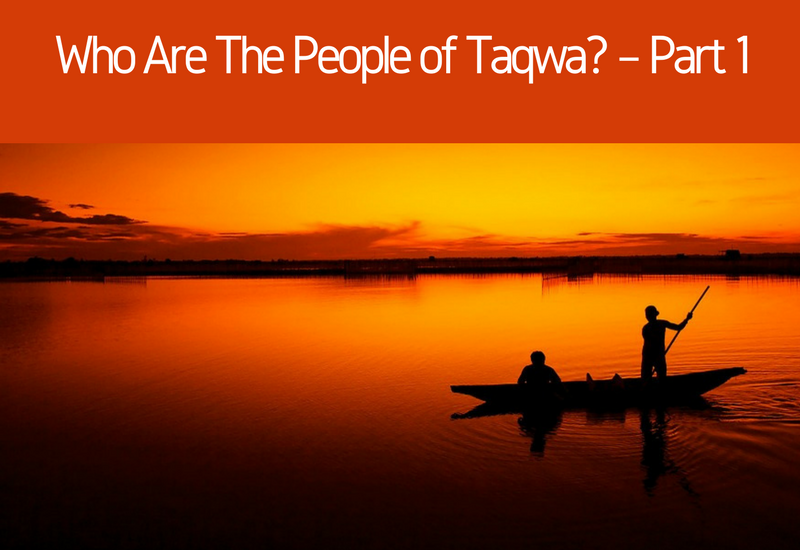 “This is the Scripture in which there is no doubt, containing guidance for those who are mindful of God, who believe in the unseen, keep up the prayer, and give out of what We have provided for them….” (Quran, 2:2-3)

The first aspect of taqwa, that we talked about in the previous article, was moral sense, that inbuilt instinct to know Allah and His deen. Once you come to the Quran with that taqwa in your heart, it opens doors of the other aspect of taqwa – the fruits of guidance. You’ll know if you’re a Muttaqi if you derive benefit from your study of the Quran, and if you have the qualities outlined by Allah (swt) as the fruits of your study.

Today let’s look at the first of these qualities – belief in the Unseen.

Belief (Iman) in the Unseen

“The real meaning of the word [iman] is to have faith, to trust, and to believe. A confidence and certainty along with a sense of awe, fear, trust, and faith is defined as belief or iman.” (Islahi 105)

What does ‘Unseen’ mean? It means everything that is beyond the physical world around us. We haven’t seen Allah, angels, jinns, or even Prophet Muhammad (sa). We also don’t see our future, when we’re going to die, or the existence of Paradise and Hellfire. All these aspects of belief are unseen to us.

Iman in this unseen world entails a lot more than theoretical knowledge. We believe in Allah; we believe He can see us and hear everything we say, or even think. But do we, really? Is our conviction strong enough to count as true belief?

Allah (swt) says in the Quran: “It is He who created the heavens and earth in six days and then established Himself above the Throne. He knows what penetrates into the earth and what emerges from it and what descends from the heaven and what ascends therein; and He is with you wherever you are. And Allah, of what you do, is Seeing.” (Quran, 57:4)

If so, then why do we sin while knowing Allah (swt) can see us? Why do we gossip about our brother behind his back, knowing that Allah can hear us? If you have the taqwa to benefit from the Quran, then reading this verse will instantly make you aware of Allah’s presence when you’re tempted to sin. That’s why it’s so important to reread the Quran as often as we can, to keep the guidance fresh in our memories. It’s a constant struggle.

“It’s easy to [say you believe in God], but at the time when it’s tested, did it impact your behaviour? Did it impact your thinking, preferences? That’s iman in the ghayb and that’s a struggle. ” (Nouman Ali Khan)

Related: How to Attain Taqwa – Part 1

Iman is not blind faith

Believing in the Unseen is not shutting your eyes and believing every bit of weird unsubstantiated myth you’re told. Islam is not a bit like that. The Quran greatly emphasises using the intellect. (See Part 8 of the Fatihah Series.)

“Those who believe in the unseen without having actually to see what they believe in are not blind worshippers,” Dr Islahi says. “On the contrary, they use their reason and accept whatever is proven in its light or supported by evidence from nature. If they have to sacrifice some of their physical and material pleasures and comforts in the process they do so gladly, without any hesitation or reluctance.” (Islahi 114)

The Quran isn’t a Book telling you to believe in fantastic things without proof. It gives many rational proofs for its arguments. For example, it makes us ponder over the wondrous creations of Allah – the earth, the mountains, the day and the night – in order to realise that the Hour is coming. The Quran thus gives us intellectual as well as spiritual guidance towards belief in the Unseen.

It’s easy to reject a truth that’s not in front of our eyes. We are less likely to neglect a slight skin cut that’s bleeding than to neglect an internal cartilage injury. That’s why Iman in the Unseen is a constant struggle, despite our having rational proofs for it, and it’s not steadily high even for the Muttaqin.

“The people who are of constant taqwa, even they have ups and downs in iman. ” (Nouman Ali Khan)

Related: How to Attain Taqwa – Part 2

“[The Muttaqin] have iman, but they [still] keep working on [it], because they [know that] their iman is not complete… Just because they had a low day, it’s not over. They get up and they try to [bring] it back up again.” (Nouman Ali Khan)

We are living in a particularly difficult time when it comes to belief in the Unseen. The emphasis we put on our five senses is beyond anything the world has seen before the last century. Many of us will only believe in something that we have experienced with one of our five senses, or which has been proven by scientists using similar research. That’s why people ask for physical proof of the existence of God.

But if we’re honest with ourselves, we’ll realise that everything can’t be experienced with the five senses. How do you, for example, define love? Physical desires? Oedipus complex? Even contemporary psychologists accept the impossibility of providing physical proofs of many aspects of the human mind.

We live in a difficult time. The struggle to believe in the Unseen is harder than ever before. But does that mean we’re less fortunate than people of the past? Not at all, and this is why:

“The people who lived in those happy times had not even come close to the opportunity to please Allah and to make Allah proud like the people who live in difficult times. He created us in this day and age. He saw us fit to face today’s challenges. …Don’t think less of yourselves. That’s again a part of iman bi-l-ghayb.” (Nouman Ali Khan)

It’s a constant and difficult struggle, and that’s why its reward is so great.

“And Paradise will be brought near to the righteous, not far, ‘This is what you were promised – for every returner [to Allah ] and keeper [of His covenant] Who feared the Most Merciful unseen and came with a heart returning [in repentance]. Enter it in peace. This is the Day of Eternity.’” (50:31-34)

In the next article we’ll look at the rest of the qualities of the Muttaqin, in sha Allah.

Related Video: How are the People of Taqwa – Nouman Ali Khan