Protective Duas from the Quran and Hadith 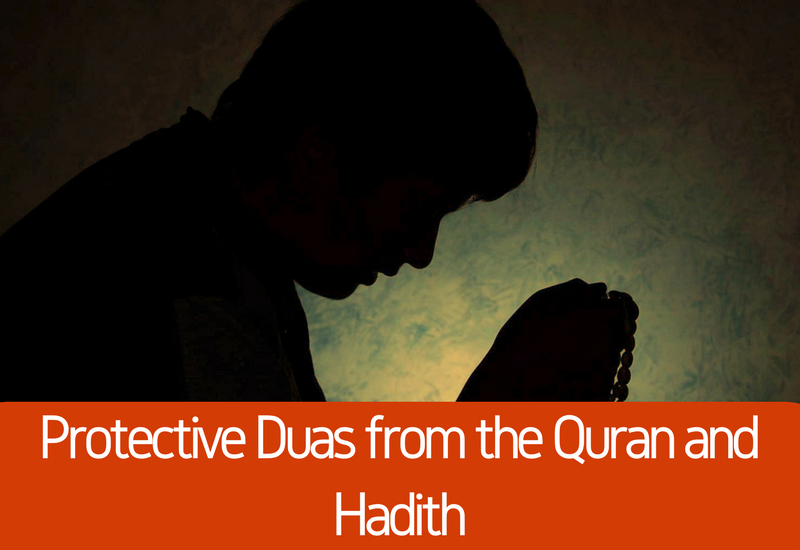 The Qur’an and the Sunnah of Muhammad (saw) has been sent down to us Muslims as guides on how to live our lives completely as believers in Allah (swt). These two books contain so many powerful verses and supplications that give us protection from evil, from debt, or even verses and duas that protect us and our families.

As the holy Prophet(saw) taught his companions and the people who came after them, every dua or verse of protection has been given to us by Allah, and we should use them to not only protect ourselves in this life, but also as protection for the hereafter.

We share some of these verses and duas below and hope that you can make a habit of reciting them during your day and use them to seek Allah (swt)’s protection.

In multiple narrations of events with companions, the Prophet continues to mention that ayat Al-Kursi is the greatest verse to be revealed and he also went on to say that “Whoever recites Aayat al-Kursiy immediately after each prescribed prayer, there will be nothing standing between him and his entering Paradise except death.”

This shows us the importance of reciting ayat Al-Kursi both as a form of protection from harm and hellfire. As Muslims, we certainly need these two forms of protection for our life on earth and in the hereafter.

“The Messenger of Allah (saw) used to seek protection against the evil of jinn and the evil eyes till Surat Al-Falaq and Surat An-Nas were revealed. After they were revealed, he took to them for seeking Allah’s protection and left everything besides them.” (Riyad as-Saliheen)

Abdullah bin Khubaib reported that the holy Prophet Muhammad (saw) told him to “Recite Surat Al-Ikhlas and Al- Mu’awwidhatain (Surat Al-Falaq and Surat An-Nas) three times at dawn and dusk. It will suffice you in all respects.” (Riyad as-Saliheen)

He, the Prophet (saw) was known to recite these chapters of the Qur’an every night before he went to sleep. He would cup his hands, recite the chapters into them, and then pass his hands all over his body.

He was also known to recite these verses anytime he was ill. Such that when he was so ill that he couldn’t recite them by himself, his wife, Aisha (ra), reported that she used to recite them and rub them all over his body. (Bukhari)

All of these narrations point to the protection that Allah (swt) has given us through these three chapters of the holy Qur’an. They serve as protection during illness, as we sleep, and as we go about our day.

These are duas for safety and protection that we should make a normal part of our worship every day so that we are guaranteed to be under the protection of Allah (swt).

Related Video: Dua That Protects You from the Evil

Protection When Leaving the House

There are some supplications for protection that are not from the Qur’an, but from the Sunnah of the holy Prophet. One of them is the supplication that we make when we are about to step out of our house.

As narrated by Anas ibn Malik, The Prophet (ﷺ) said: When a man goes out of his house and says: “In the name of Allah, I trust in Allah; there is no might and no power but in Allah,” the following will be said to him at that time: “You are guided, defended and protected.” The devils will go far from him and another devil will say: How can you deal with a man who has been guided, defended and protected?” (Sunan Abi Dawud)

The main prayer to be recited, from this narration is “Bismillahi, tawakaltu alla llahi, walla aola, walla quwwata illah billah”, the translation of which was bolded in the narration above.

Like the verses of the Qur’an already mentioned, this supplication is also for protection and safety, especially as we step out into the world and go about our daily activities.

Remember to say it every morning as you leave the house. You can even help yourself to remember to say it by associating it with a task that you do when you are leaving the house, e.g. locking your doors, or starting your car.

There are so many verses of the holy Qur’an that serve a purpose for us beyond reading them and earning rewards. Some of which are these verses that we have mentioned as verses that we use to protect ourselves and our families from harm. And even though there are many more that you will discover as you understand the Qur’an more, these ones are good for us to start protecting ourselves with every day.

Related Video: Duas from the Quran for Protection

A Close Look at Surat al-Fatihah – Part 4
Al Wakeel: The Ultimate Trustee
What Is Success in Islam and How to Attain It

2 responses to “Protective Duas from the Quran and Hadith”