Understanding Hadith – ‘its not complicated!’ 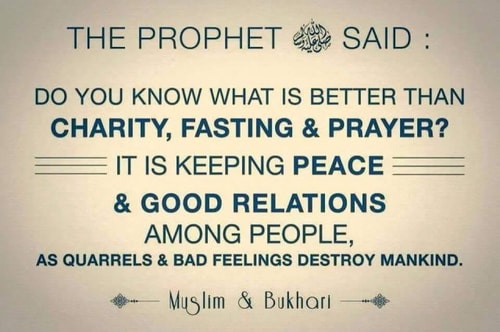 My brothers and sisters in Islam and in humanity, please lend me a few minutes. I promise you will take something of benefit insha’Allah from this one!

Think about this – you opt for a subject in your school or college, a subject you are totally naive to, say chemistry. You get the textbook and you open to read it. Are you sure you can get the hold of all that it says all by yourself? Every equation? Each reaction? And what if you were given a set of chemicals to perform something practically with? Are you confident you won’t blow up the laboratory? Well, I doubt that!

Surely the textbook sufficed in the knowledge itself, but for that knowledge to be applied practically what is that one thing you will miss? A TEACHER right?

Sorry for the quiz but that was required to help you understand better that which I am going to tell you now. After all this puzzling I will now seriously get to the point.

More than 1400 years from today, the Quran was revealed. People started accepting Islam and started reading Quran. But they also needed someone to show them the how-tos. Allah appointed our beloved Prophet and Messenger Muhammad ﷺ for that purpose, as a teacher of Islam and Quran to mankind. His ﷺ teachings are recorded in a well organised & authentic fashion.

So now that you have the backstory, let us dive in.

What exactly is Hadith?

In Islam, Hadith refers to the sayings or narrations of the Prophet Muhammad’s ﷺ speech, His deeds & acts of approval & disapproval (spoken or by way of action) about something.

Both words are almost similar yet not completely the same. There are places where they can be interchangeably used but in certain other places, they have their own distinct meanings according to the context.

The basic difference is:

But in a case like referring to the books of Hadith, or the people who acknowledge the Hadith, any of the two terms can be used. The books can be called Kutub al-Hadith as well as Kutub as-Sunnah. The people can be referred to as Ahlus Sunnah or Ahlul Hadith.

Hadith are categorized on a number of basis of classifications, all of which makes sense even though it may seem complicated to understand the fine lines. Let us try to simply get acquainted with the terminology.

Myth #1: The Quran is incomplete without Hadith

The Quran is undoubtedly a complete book in itself but the Hadith simply serves the purpose of a commentary of Quran which makes both of them inseparable even though they are are two individual sources of Ilm!

Myth #2: The Quran can be completely understood without the help of Hadith [AHLUL QUR’AN or QUR’ANIYYEEN]

This is the view of a group or sect who called themselves Ahlul Qur’an or the Qur’aniyyeen. They totally reject the Hadith as a part of Deen.

Prophet Muhammad ﷺ and his teachings do hold an important position in the understanding of the Quran itself. Some evidences for this are found in the Quran which are ample to refute the above mentioned incorrect group (May Allah SWT guide them & us to the straight path)

Conclusion and a take away message…

The science of Hadith is indeed a complex one and it is difficult to fathom for a layman or a beginner like us to understand it in its complete depth or remember the categories. But the minimal that we all must strive for is to read the simplified collection of the Sahih Hadiths  such as ‘Arba’een Nawawi’ which includes forty basic Hadiths from books such as that of Imam Bukhari, Muslim, Tirmidhi, Abu Dawud.

If we plan for one Hadith a day which is no doubt not a burden, then insha’Allah we would cover more than 300 Hadiths one year from now.

There are so many popular and awesome Sahih Hadith apps and E books which makes it so easy and handy for us to carry so much knowledge in our pockets anytime, anywhere.

So from now on whether it is the commute time or the break hours, office or home, let us set a goal of ‘One Hadith Per Day’ and encourage our family and friends to do the same and insha’Allah ta’ala this would be a massive addition to our knowledge bit by bit and also Sadaqah Jaariya for all of us.

May Allah bless us all with clarity in our understanding of Deen to walk and remain on the Siraat al Mustaqeem and may our knowledge turn into our actions.

All that is good in it is from Allah subh’anahu wa ta’ala and all the shortcomings are from our falliability. May we benefit from this Insha’Allah! Ameen!

Related Video: Why do we need Hadith if Quran is enough? | Nouman Ali Khan

2 responses to “Understanding Hadith – ‘its not complicated!’”