Who are the People of Taqwa? – Part 2 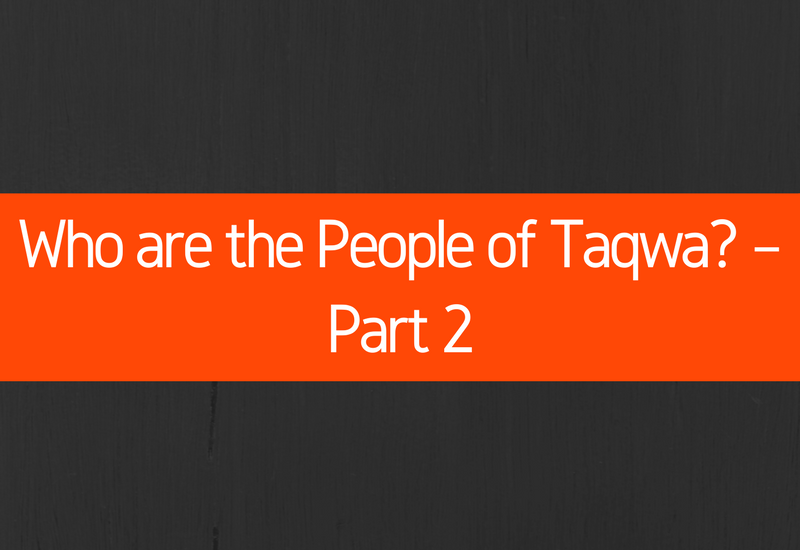 “This is the Scripture in which there is no doubt, containing guidance for those who are mindful of God, who believe in the unseen, keep up the prayer, and give out of what We have provided for them; those who believe in the revelation sent down to you [Muhammad], and in what was sent before you, those who have firm faith in the Hereafter. Such people are following their Lord’s guidance and it is they who will prosper.” (Quran, 2:2-5)

In the previous article, we looked at the first quality of the group of people, al-Muttaqin, who are the only ones who can benefit from the Quran. Now let’s see what the rest of the qualities are.

If you come to the Quran with the moral sense of protecting yourself from evil, and it strengthens your belief in the Unseen, then your heart will naturally seek out a strong connection with Allah (swt).

Allah (swt) taught us how to connect with Him – through the five daily prayers. But ‘establishing’ prayer doesn’t really mean just praying them. Dr Islahi lists some of the things this means:

The true Muttaqin don’t just go through their prayer as a chore to be completed and get rid of. They make sure they pray on time and pray in a way that really makes their prayer a conversation with their Lord. Thus, for them, prayer becomes the ‘coolness of their eyes’, an experience of ultimate bliss.

“They make sure that this is a pillar that never falls.”  (Nouman Ali Khan)

Related: How to Attain Taqwa – Part 1

Giving Out of What Allah Provided You

Allah (swt), in categorising the Muttaqin, selected only two attributes of action – salah and infaq. This is significant because these two attributes form the core of a person’s good deeds, and all other good deeds stem out from them. Salah defines and flourishes your relationship with Allah. And infaq defines and improves your relationship with the world. If one truly establishes the prayers and develops the attitude of infaq towards the world, then other good deeds will necessarily follow.

But what is infaq? What did Allah provide us that we need to give out of?

“Some people were provided nothing but health, [others] a sharp mind, a great deal of wealth, opportunities, [or] fame –  Allah provides different people different things. My rizq is not the same as your rizq…. From whatever Allah provided them, it is out of that they spend.” (Nouman Ali Khan)

Allah (swt) said “What We have provided them” instead of “what they have”. This attribution of provision to Himself is significant because:

Belief (Iman) in the Books

If you believe in the Unseen, your mind forms the rational conclusion that a merciful God, who created this beautiful universe, who decorated the night sky with stars to guide us on our journeys, would not leave you to wander on the earth without giving you guidance for the journey of life. That guidance is the Quran and the precedingly revealed Books.

Believing in the Quran entails belief in ghayb in two ways:

Thus, it is only those who believe in revelation who can benefit from the Quran. The Quran in turn provides proofs of its being of divine origin, strengthening your belief in revelation. Thus, it’s an upward cycle of belief and guidance.

Related: How to Attain Taqwa – Part 2

Yaqin (Certainty) in the Hereafter

“Of all the things [the Muttaqin] believe, the one thing they never forget about is the afterlife.” (Nouman Ali Khan)

The thing that protects us from committing sins is a certainty that, even if we escape punishment in this world, we will be held accountable in the next.

2. Hope. This life isn’t the end – this one belief can save countless people from suicide. No matter how hard life gets, the Muttaqin always have hope. They can bear the death of a loved one, and they can go through depression knowing that it will get better. They can bear the pain of cancer, knowing that there will  be a time when this pain will become pleasure.

Belief in the Hereafter stems out of one’s study of the Quran. “Bits and pieces about the afterlife were given before, but now that you’re looking at it through the lens of the Quran, all of those gaps have been filled.” (Nouman Ali Khan)

Keys to the Message: How You Can Understand the Quran in Arabic
Some Quotes from Exemplary Muslims
Lessons From the Advice of Luqman