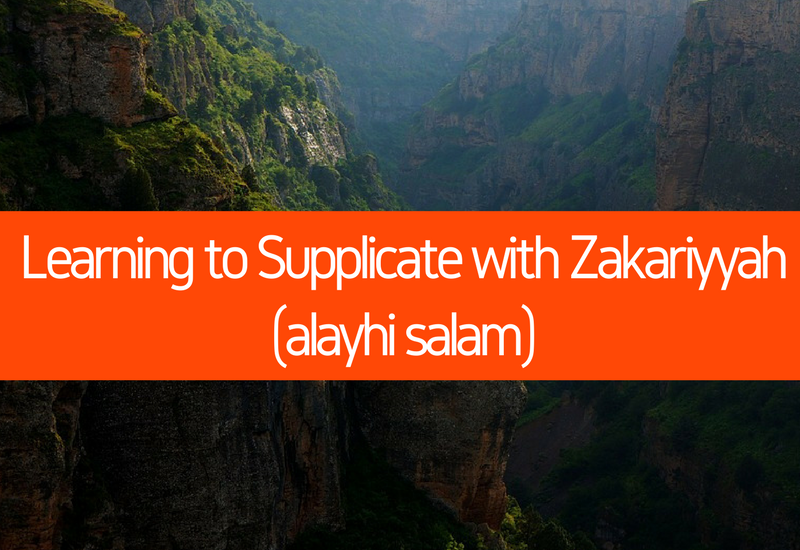 Surah Maryam begins with a story about a special dua that was made by Zakariyyah (alayhi salam). Zakariyyah (alayhi salam) had reached old age but he had no children. He prayed to Allah to grant him an offspring. There were no visible means for his desire to come to life, however, Allah (swt) accepted his supplication and gave him the tidings of a righteous son.

What was so special about Zakariyyah’s prayer that it got answered? What made his dua reach the heavens?  What do we lack in our prayers? In what manner should we make a dua so that it is answered? Let’s discover in light of the introductory passage of Surah Maryam. Today, let’s learn to supplicate with one of our dear teachers, Zakariyyah (alayhi salam).

Kaf Ha Ya `Ain Sad. (This is) a reminder of the mercy of your Lord to His servant Zakariyya. When he called his Lord (with) a call in secret.  He said: “My Lord! Indeed my bones have grown feeble, and my head has filled with grey hair, and I have never been unblessed in my invocation to You, O my Lord! And verily, I fear the successors after me, and my wife is barren. So give me from Yourself an heir. Who shall inherit me, and inherit (also) the posterity of Ya`qub. And make him, my Lord, one with whom You are well-pleased!” (Surah Maryam, Verses 1 – 6)

Do you call upon Allah?

The first lesson we gain from Zakariyyah (alayhi salam) is to call upon Allah. He is the only one who listens to each of us, no matter what language we speak and what time of the day or night it is. Not only does He listen, He pays heed – even to the tiniest whispers and indescribable secrets of our heart. Can we find any listener better than the All-Hearing? Moreover, He is the Only One capable of fulfilling whatever we desire. He is the All-Powerful! But unlike any worldly king, no intercessors or intermediaries hinder our path to Him. He is just a Dua away!

Who would then be so naïve to ignore Him and turn to others beside Him? Why in His presence should someone head to saints and shrines for their needs?  If we keep asking favors from people they become annoyed, but that All-Loving Creator is displeased only when one does not call upon Him. The more we pray to Him, the more we turn to Him for our tiniest needs, the more He loves us and we increase in our love for Him. Why then be stingy in supplications!

So, whenever you need something or a desire takes root in your heart, even if it be as little as wanting to eat a chocolate, make it a practice of calling first upon Allah. Ask Allah to grant it to you. He has all the means to do so! Prophet Muhammad ﷺ has instructed us:

“Let one of you ask his Lord for his every need, until he asks Him for salt, and asks Him for the strap of his sandal when it breaks.” (Tirmidhi; Hasan)

When Zakariyyah (alayhi salam) wanted something, even though it was something apparently impossible, he simply reached out to Allah.

We whisper our secrets to only the most trustworthy and best of our friends. Zakariyyah made his supplication secretly because that is more beloved to Allah. And where does a secret dua originate from? The heart! A thing to keep in mind when supplicating is to not merely ‘read’ or ‘recite’ the supplications, rather you have to ‘mean’ them and ask them from the heart.

Whisper to Allah and call upon Him in secret whenever you can, especially during the times that have been mentioned by the Prophet ﷺ. Call upon Allah after every obligatory Salah, between Adhan and Iqamah, during rain and in the middle of the night. Indeed the best time for making secret supplications is at Tahajjud when there are no distractions and disturbances. If you can’t make for it every day, try at least once a week or once a month.

Related: Surah Maryam – Are you a recipient of Allah’s mercy?

Look closely at the words of Zakariyyah (alayhi salam). He mentioned his old age and the condition of his wife and yet he was not despaired. He had conviction in the power and ability of Allah to fulfill his prayer. He was not despaired of his situation and rather had full belief that Allah would answer his call. This is what we must learn from him; patience and conviction in duas!

Often when we are not granted what we ask for, we stop praying for it. However, we must keep praying and have certainty in Allah. Prophet Muhammad ﷺ said: “The supplication of every one of you is granted if he does not grow impatient and says: I supplicated but it was not granted.” (Muslim)

Even if you don’t see your duas being accepted right away, have faith! Your supplications are not going in vain. Prophet Muhammad ﷺ has told us: “There is no Muslim who does not offer any dua in which there is no sin or severing of family ties but Allah will give him one of three things in return: either He will answer his dua sooner, or he will store it up for him in the Hereafter, or He will divert an equivalent evil away from him because of it.”

Nonetheless, if one is consuming the unlawful (Haram) then that is one of the causes for the non-acceptance of supplications as mentioned in a hadith.

Duas of the Prophets

The best supplications are those mentioned in the Quran and the Sunnah. The best supplications are those of the Prophets. They do not only teach us how to ask and the best words to use for asking, but also what to ask for. These supplications teach us the priorities in life, they shape our desires and nurture our faith. Zakariyyah (alayhi salam) did not desire a child who would inherit his wealth. Rather, he wanted a child who would inherit the legacy of prophethood. The prophets do not leave any inheritance in terms of wealth, whatever they leave is to be spent in charity.

Zakariyyah said: “And make him, my Lord, one with whom You are well-pleased!” This means ‘Make him pleasing to You (Allah) and your creation. Love him and make him beloved to your creatures, in both his religion and his character.

The question to ask ourselves is: what do we desire and pray for our children? Do we only pray for their physical beauty, wealth and material happiness or do we pray and endeavour for them to be lovable in character and loved by Allah? Do we ask only for ourselves or for the whole Ummah? Do we really desire their akhirah? Or are we of those who hinder our children from becoming the beloveds of Allah? Are we concerned enough about Islam to ask Allah for children who would raise its banner and uplift its message, or are we least bothered about it?

The dua of Zakariyyah (alayhi salam) is teaching us what to supplicate for. It is giving a direction to our desires and actions. It is giving us the first lesson on parenting; let’s desire for our children to become the beloveds of Allah and assist them in this path.