In my last article, we looked at the qualities that branch out from a Muttaqi’s connection with the Quran. After Allah (swt) mentions these qualities, He wraps up the passage by saying with quite a bit of emphasis:

“Those are upon [right] guidance from their Lord, and it is those who are the successful.” (Quran, 2:5)

Here we have a complete definition of success, the formula of what it takes to excel in life. The world today has its own definition of success – money, power, family honor etc. But, as we can see, Allah’s definition is completely different, and the most correct. When we pursue worldly goals, it gives us success in a limited sense. You can say that you are a successful businessman, but that doesn’t necessarily mean you’re successful in life. That’s why the world again and again proves that money doesn’t bring happiness, by the dissatisfaction experienced by the rich and powerful.

“Who believe in the unseen, establishes prayer, and spends out of what We have provided for them, And who believes in what has been revealed to you, [O Muhammad], and what was revealed before you, and of the Hereafter they are certain [in faith].” (2:3-4)

You will find explanations of each of these qualities in the previous articles [taqwa part 1 and part 2]. Today, we’ll look at how all these qualities are interconnected, and how each strengthens and propels the other, thus lifting you in an upward cycle of success. 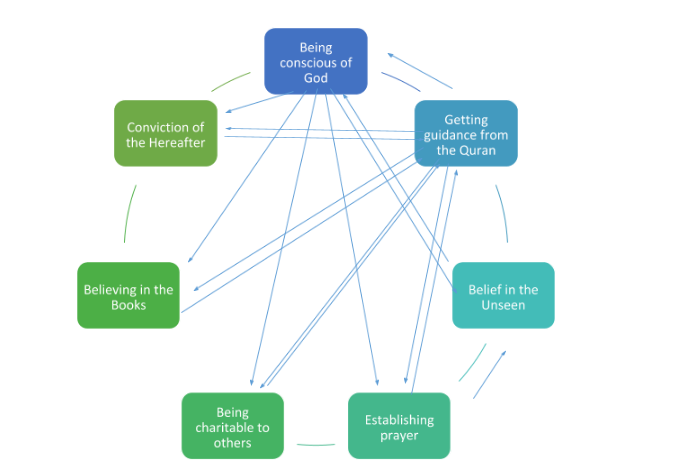 As Allah (swt) says in the second ayah of this Surah, only the Muttaqin, those conscious of God and have the sense of protecting their souls, benefit from guidance. In turn, guidance makes us have more Taqwa. Allah (swt) said to the Children of Israel:

“Take what We have given you with determination and remember what is in it that perhaps you may become righteous (tattaqun).” (2:63)

Belief in the Unseen urges one to connect to Allah through daily prayers, and to be charitable to Allah’s creation. Because he knows Allah can see him, and the Angels are writing up his deeds, and so on. Establishing a regular connection with Allah in turn strengthens one’s belief in the Unseen as he feels linked to his Creator.

Guidance from the Quran obviates belief in it and the previous Revelations from Allah, as Allah (swt) mentions them repeatedly in it. Belief in the Quran’s authenticity in turn strengthens one’s ability to get guidance from it.

Belief in the Unseen world and establishing prayer makes firm one’s conviction in accountability after death, i.e. the Hereafter. When you believe in Allah and His attributes of goodness, mercy, perfection and justice, you can’t help being convinced that such a Creator and Master would not leave injustice unpunished or reward the good people.

Belief in the Hereafter in turn strengthens one’s sense of protecting his soul from evil, increasing one’s Taqwa. It also makes one vigilant in performing Salah and being good to Allah’s creation.

“You can only warn those who fear their Lord unseen and have established prayer. And whoever purifies himself only purifies himself for [the benefit of] his soul. And to Allah is the [final] destination.” (Quran, 35:18)

“The more a person’s commitment to good deeds and belief grows, the more will he gain in guidance.” (Islahi 114)

All this gives us a picture of how intricately connected these qualities of success are. It’s almost like a domino effect, and it all starts with:

“This is the Book about which there is no doubt, a guidance for those conscious of Allah.” (Quran, 2:2)

In the next article, we will in sha Allah look at those who don’t get guided from the Quran, whose hearts are sealed to it.